As far as the residents of Faleula and Puipaa are concerned, it is a relief the bulk of the work has been completed. (Photo: Vaitogi A. Matafeo)

Resurfacing of road between Puipa’a and Faleula road is complete after the final touches to the asphalt were completed, complementing other progress on the broader West Coast Road Project upgrade.

The 1.8 kilometre section of the road worth $6 million was built by Silva Transport, Ulia Construction and TN Toleafoa.

The three local companies went into a joint venture following a request from the Government to lower requirements from the World Bank to allow other companies to benefit from the multi-billion tala project.

It’s been months since road construction works for the Faleula to Puipa’a section of road began and the project has encountered some delays.

Though as far as the residents of Faleula and Puipaa are concerned, it is a relief the bulk of the work has been completed.

One Faleula resident, Fa’amanu Kelemete, told the Samoa Observer that she is grateful to the Government as well as the contractors for getting the road fixed as soon as possible. 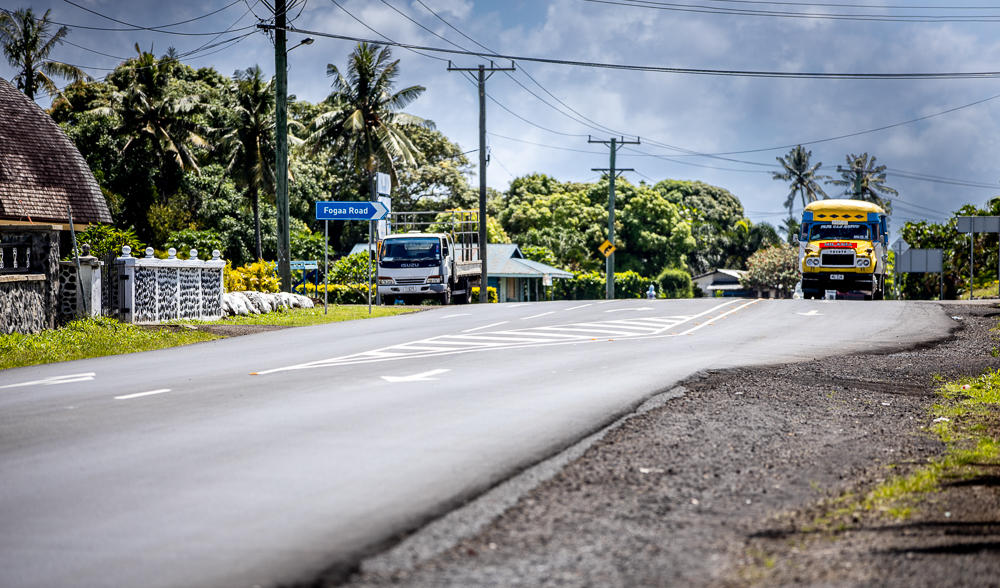 She said walking on the road was a challenge with never settling dust for months.

The road has been smoothed, road signage has been drawn, and bus stop signs are now put up.

It was not possible to get a comment from the joint venture companies, though it is clear the majority of the work is complete.

In a previous interview with the Chief Executive Officer of the Land Transport Authority, Galumalemana Ta'atialeoitiiti Tutuvanu-Schwalger, she said coronavirus restrictions and the state of emergency lockdown had delayed the road project.

“With the COVID-19 pandemic and the state of emergency our country is in, we are facing challenges with all our current road works including the upgrade works at West Coast Road,” said the C.E.O.

“These include [a] shortage of contractors’ staff turning up due to [the] cessation of bus services [... and] the delay in supply of materials from overseas due to some countries [remaining in] lockdown etc.”

Funded by the World Bank and the Government, the total West Coast Road upgrade project extends from Saina to Malua.

Another component of the broader West Coast Road reconstruction project, not connected to Faleula, involving the laying of asphalt from Saina to Malua is part of works contracted to Ott Construction and spans a 12.6 kilometer distance.

The majority of the West Coast Road project is being helmed by Ott Construction.