Only big firms to benefit from relief package - farmer

A $66 million economic relief package offered by the Government, in response to the COVID-19 global pandemic lockdown, has left small businesses like farmers, fishermen and growers feeling left out.

In the Supplementary Budget 2019/2020 passed by Parliament, $12.5 million worth of assistance was earmarked for the private sector.

Another $27.5 million was allocated to secure purchasing power of the citizen, $3.4 million on Food Security Response in Agriculture and the remaining fund on multi-sectoral response.

Farmers like Pale Faaolesa Esau, of Vaigaga, said he felt there was nothing for people like him.

The taro, banana and vegetables grower was selling his produce at the Vaigaga reserve area when the Samoa Observer caught up with him.

Asked if he was aware of the stimulus package being approved to assist businesses and citizens, Mr. Esau said yes because he likes to keep up to date with the current affairs.

But the farmer said he was puzzled as to how the stimulus package could help small businesses like him and if there are any assistance for him.

“I thank the Government for assisting the private sector during these hard times," he said. "But I feel we are the ones left unrepresented in these funds.

“You see the big businesses often get the big piece of the pie but for us we are not really considered to be part of that business community.

“I believe the Government might have helped them more because they have big loans and employ a lot of people but I would argue that we also operate business on a smaller scale and from our own savings and not loans.”

Mr. Esau pointed out that as a small businesses that operates without any loan commitments they are not asking for much.

While he understands that part of the assistance is for free rent at specific Government-owned premises and refunds from National Provident Fund, the 54-year-old said it was good news to big businesses.

He noted that the Government properties are leased by the big businesses that could afford it and even the N.P.F. assistance he was not entitled to it.

“I don’t have a N.P.F. so I’m not entitled to those benefits but like I mentioned even if the Government supports us by providing free machete for my plantation it would be really great.”

The farmer added that even though taro export is continuing, he said the market have their own allocated farmers to supply the containers which does not cover him.

A young businesswoman from Tulaele, who operates a fishing alia out of Manono, Lesina Afemai also shared the same view. 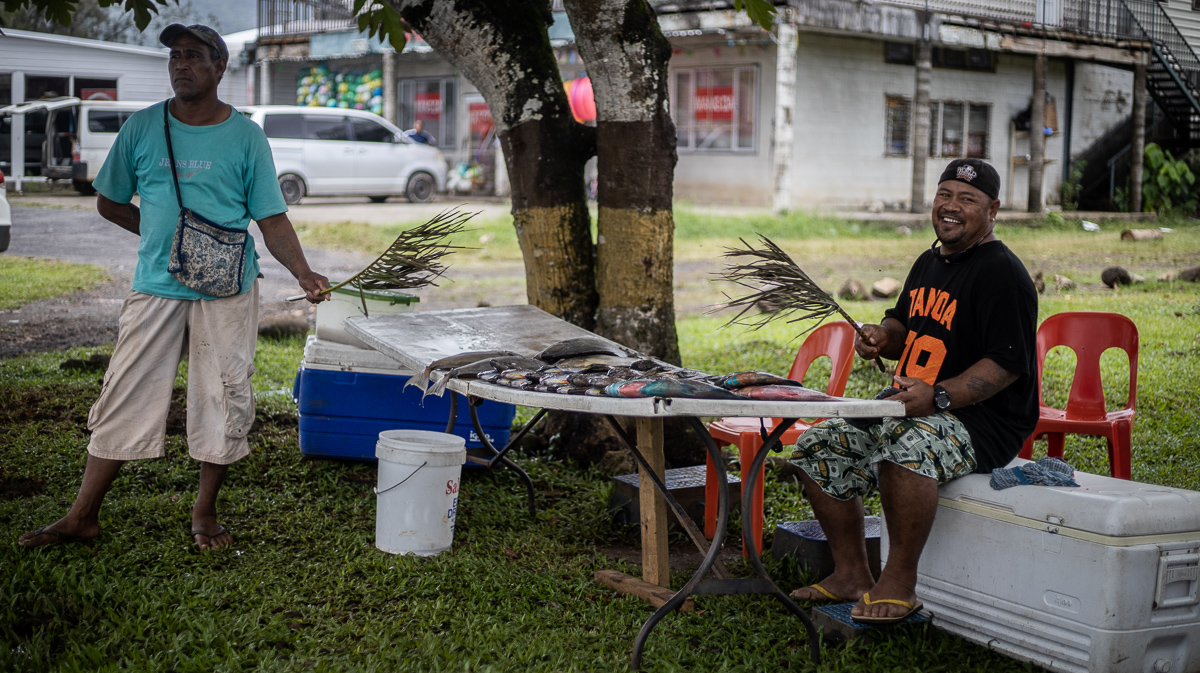 The 27-year-old mother of three children employs two of her relatives to help sell fish on the side of the road in Vailoa.

Ms. Afemai said there was no assistance that she is aware of from the stimulus package that will help her and her fishing business.

“Our voices [small businesses] are often lost and are being suppressed when big businesses come in,” she said.

“That is why I don’t depend on the Government and any of these associations and bodies that are setup to help certain groups.

“We run our own business and if we get some help we welcome it but for most of the time we are on our own…we pay our own bills and whatever is left that is for us to use.”

The young mother said fish sale has not been affected so much due to the Lent season.

However, she said that in the absence of help from the stimulus package, the law enforcement officers have made it difficult for them to sell fish since the time the Police advised they are unable to sell at Vailoa.

“We had gone to see the Prime Minister in previous week and he made it clear that the ban on street vendors does not include us,” she said.

“But that hasn’t been the case lately. It was just yesterday that the Police also came and told the boys they aren’t allowed to sell fish here at Vailoa, even when we told them the Prime Minister has already explained that we are not prohibited to do so.”

An elderly mother from Leulumoega, who grows pineapples and pawpaw being sold by her children at Fugalei market, also shared her view on the stimulus package.

Vaosa Fereti applauded the Government for the support for private sector and citizens in preparing the stimulus package.

Similar to Mr. Esau and Ms. Afemai, the grandmother said their sale has been very slow but regardless she is content that Samoa is free from the COVID-19 virus.

Mrs. Fereti only has one request to the Accident and Compensation Corporation operating the Fugalei market.

“I guess the only way I can ask that the Government can help our family business is if the rent at the Fugalei market is free for the next two months or so,” she said.

“We don’t have loans and we only sell so we contribute to the church and put food on the table.

“So we don’t ask for much but if we can get free rent it would be good for us.”

In the stimulus package, the Government is to carry three months of loan repayments for all small businesses, under its Government Guarantee Schemes administered by the Samoa Business Hub.

It also includes interest relief for all loans with the Development Bank of Samoa for two months, three months of free rent for all businesses renting at the D.B.S. for two months, and two months free rent at the Samoa Land Corporation market in Savalalo, Vaitele and Salelologa.

The President of the Federated Farmers of Samoa Incorporated, Saena Paulino Penaia expressed concerns at the lack of assistance from Government for farmers.

In a brief interview, Saena said the association is preparing a paper for Government asking as to why the farmers were not given assistance in the $66 million stimulus package.

“The Government should not just look at the businesses but how about the farmers in this,” he said.

He could not say more stating that the association will provide an official response after their discussions.

A total of $3.5 million was allocated to food security response in Agriculture.

The majority of the fund for the sector of $2.5 million has been given to the Scientific Research Organisation of Samoa (S.R.O.S.) for commercial arm.

According to the Minister of Finance, Sili Epa Tuioti, the assistance for S.R.O.S. is to commercialise local value added agricultural processes like breadfruit flour, coconut oil, avocado margarine and others to substitute import.