Samoa
The Pure Indulgence charter boat which was refurbished at a cost of $1 million tala. (Photo: Filipo Ah Far)

A local charter boat that was refurbished in Samoa at the cost of over $1 million tala has been unveiled at Matautu with the Prime Minister praising its contribution to tourism.

The vessel Pure Indulgence, which has a long association with Samoa’s game fishing circuit, has been given a new lease of life and was launched at the S.I.G.F.A headquarters at the Mariners in Matautu on Thursday evening by its local owner Troppo Fishing Adventures Samoa.

Prime Minister Fiame Naomi Mata’afa, who was among the guests at the launching, made reference in her speech during the launching to the vessel’s owners and their long association with game fishing in Samoa.

"Greg and Cheryl Hopping and their company Troppo Fishing Adventures have been a part of the Samoan sport fishing and tourism community since 2003 when Greg first started guiding fishing adventures to Samoa from Australia,” Fiame said.

“In 2005 with the full support of the local community and Government, they invested in a magnificent boat Pure Indulgence.

"Troppo Fishing has made a significant contributions to Samoa's economy and marine conservation through the tourism sector. 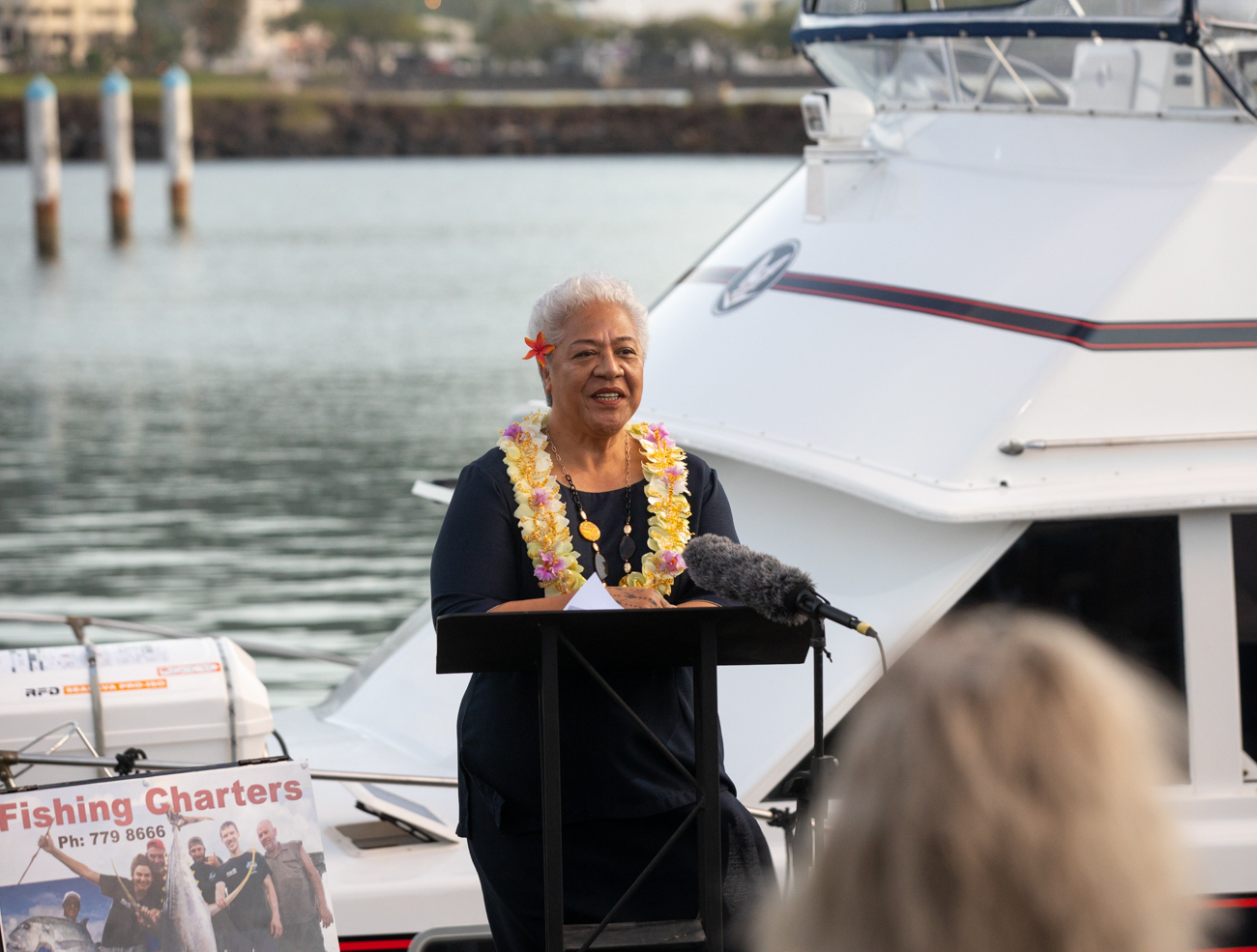 “It has promoted fishing charters out of Apia with clients ranging from individuals, companies and hoteliers.

"It has been instrumental in the promotion of Samoa as a big game and sports fishing destination for many international anglers.

“Many who return to enjoy the experience and fish in our waters.”

The owners of the newly refurbished vessel also promoted and implemented sustainable fishing practices in Samoa, according to the Prime Minister.

“This is key in the Government's stride to protect its marine species and environment through effective conservation measures," she said.

Mr. Hopping has also been active in the 2011 development of Whale Watching Guidelines for the South Pacific, which Fiame says has guided tour operators in the region.

"In 2017 Greg represented Samoa as the Charter Fishing Sector during the promotion of Samoa at the STA Roadshow held in Auckland,” the Prime Minister added.

"The past three years I'm sure have tested your resilience and your spirit Greg but where we anticipate greater challenges, we make bolder commitments to take us to newer heights," she said.

"Troppo Fishing Adventures has given truth to this testament and continued to restore their flagship charter boat from May last year.

"So the local subcontractors, Samoa tradesmen, crafts people and supporters saw the rebirth of Pure Indulgence.”

The Prime Minister commended the hard work, passion and commitment that went into their work to restore, refurbish and refit the vessel.

Mr. Hopping told the Samoa Observer that he is proud of their combined achievement and was grateful to everyone involved, while adding that this is the first time a project of this nature had been undertaken in Samoa.

“The results can only be described as magnificent and a credit to all those who have been involved," he said.

"After nearly 20 years of commitment and investment in Samoa, there is no doubt that Troppo Fishing Adventures is dedicated to the future of Samoa and will be a big part of the Samoa Tourism Community for many years to come.”

The work on the vessel took about 10 months to complete, according to Peter Junior Meredith, who supervised the work to refurbish the vessel. 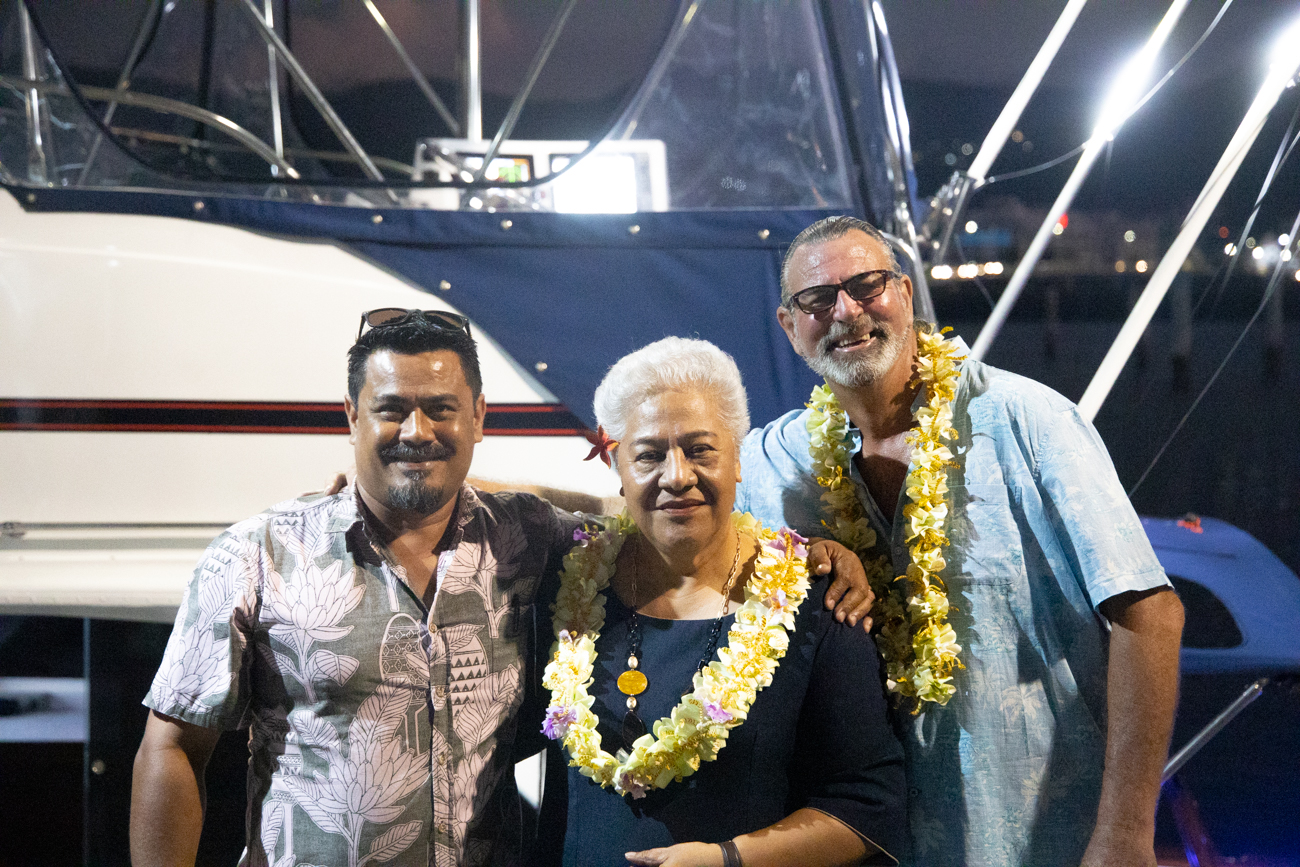 "I have to credit God for all the work. Without him we wouldn't have done it well,” Mr Meredith said. “I couldn't do it alone. We had a team of 15 builders and it was long hours of work.

"There are so many people to thank, and I also thank my wife and child for their patience.”

Alise Stunnenberg, General Manager of Island Hopper Vacations Samoa and a Director of the S.T.A Board, told the Samoa Observer that Mr. Hopping's commitment to Samoa's tourism is commendable.

"As a destination, it is all about the experience. People  will always remember that because they participated and immersed themselves in the experience.

“Greg Hopping has been providing fishing experiences to our visitors and as an inbound tour operator and Destination Marketing Company.

“I'm very glad to see the beautiful refurbished Pure Indulgence to once again be part of our visitors' experience. Greg's commitment to our tourism industry is commendable."

Nynette Sass, the former C.E.O of Samoa Hotel Association, told this newspaper that she went fishing on Pure indulgence twice as a member of the Team Troppo Ladies during the S.I.G.F.A. Internationals and on many other occasions with friends.

"Game Fishing is a popular sports activity with a big world following, seeing the refurbished Pure Indulgence return to water ready for action is a fantastic sight because I know that she will contribute to the marketing of our country, by attracting those visitors with a passion for fishing and plenty of disposable income to spend in the country," she said.

"Congratulations to Greg Hopping who is passionate about this exciting sector of our tourism.

“It's an impressive refurbishing job, beautifully done by our own local specialists led by Junior Meredith.”

The launching last Thursday evening was attended by local business and government representatives and friends of Troppo Fishing Adventures, with the program concluding with a fire knife dance by the Ailao club which lit up the beachfront at sunset.