Never give up. That’s the mantra driving two-time Olympic athlete Alexander Melei Rose, Samoa's flag bearer for the Tokyo Olympics who, despite being eliminated in the discus preliminary round at the Tokyo Olympics Friday, says he already has his sights set on the Paris Games and winning a medal.

The American-based athlete Rose said he was incredibly honoured to bear the flag of Samoa at the Tokyo Olympics and noted that winning a medal at the Olympics for Samoa is still his goal.

To prepare for Paris, his next stop is Birmingham, United Kingdom for the 2022 Commonwealth Games.

“It is my goal to still compete for an Olympic discus medal for Samoa. The first step is making a final, and I hope to prepare myself by competing well in large competitions in the future. Next stop is Commonwealth Games 2022,” Rose told the Samoa Observer.

“I was incredibly honoured to bear the Samoan flag in the opening ceremony. I was excited to represent Samoa with pride, and it gave me more drive to do well in the future. The only sad part was knowing that our Samoan weightlifters could not compete – but this motivated all of us immensely.”

At the Olympics he was only allowed three throws in the qualifying round, inside a stadium where wind can't positively affect the throw, he explained.

“It is why even the good performances in the qualifying round are usually 2-4 meters beneath an individual’s season best,” said Mr. Rose.

“For example, the Olympic standard for the competition was 66 metres for all 32 competitors, but only one person (the world leader and defending World Champion) managed a throw of 66 metres.”

The field was composed of 32 throwers; the top 12 of whom advanced to the final round. All three of Rose’s throws topped 61 metres, but he missed out on a passage to the finals, coming in 18th.

Rose needed a throw of at least 62.93 meters to reach the final.

He bowed out in the preliminary round last Friday with a throw of 61.72 meters.

His career best, 67.48, was achieved during a meet at the University of Arizona in May.

He went into the Tokyo competition ranked seventh in the world, “and truly thought that [he] could qualify for the Olympic final and compete for a medal.”

“Unfortunately I have had a very rough last month of training, and I struggled to maintain the 67m form I was in earlier in the year. This decline was the result of many factors. I didn't have a strong strength base since my abdominal surgery last September,” said Rose.

“I was afraid to push the weights, and I think this contributed to my strength levels diminishing late in the season. I also traveled a lot throughout the year, accepting invitations to European meets (including a Diamond League) that required a lot of travel and time off from rigorous training. To top this all off a sinus infection has been tough to fend off during my stay in Tokyo.”

He thought of things that could have been done differently but said he gave it his all and “what happened – happened.” 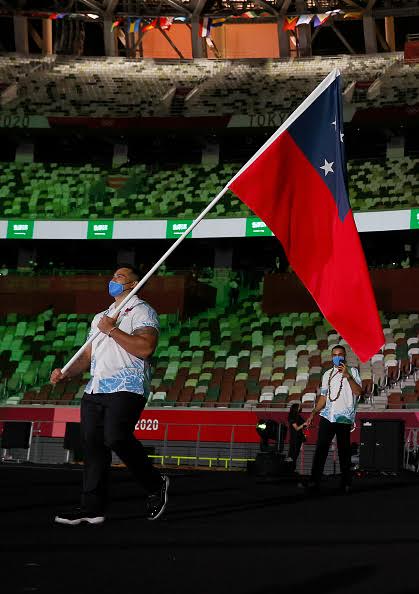 Rose congratulated his competitors who advanced to the final.

“I keep running the event over in my head trying to think of things that I could have done differently this season. But at end of the day what happened happened. I threw 61.72m and missed out on the Olympic final by six spots, placing 18th. I congratulate all my competitors on earning their spot in the final, and I hope to do better in the future!,” he said.

“It was tough to face the fact that I was not advancing in the final, especially considering that I took so much time off from work to prepare for Tokyo. But if I could go back and do it all again I would. I have no regrets with my choice, and I gave it everything I had.”

His top three takeaways from Tokyo are: 1. Never give up, 2. Be proud of how far you have come and 3. Be grateful for every opportunity that you are given.”

“Pressure is a privilege. It means someone believes in you,”. Rose said.

his number two takeaway is especially important for him because he had major groin surgery in September.

His abdominal and abductor muscles were re-attached to my pubic bone in the surgical operation.

“I didn't even know if I would be able to throw again. I went on to have the best season of my career with multiple national records, and I even competed in a Diamond League track meet, which is harder to get in than the Olympics or World Championships. I am very thankful,” Rose said.

He expressed his gratitude to his support system, starting with his wife Samantha Rose.

“The biggest thank you goes to my wife Samantha for being my rock during all of this. Being the wife of an Olympian is not easy, especially during the pandemic. She is the strongest person I know, and I am truly lucky and blessed to be her husband,” said Rose.

“Thank you to Samoa Association of Sports and National Olympic Committee, S.A.S.N.O.C., for making these Olympics for Samoa possible. They did an incredible job from an organizational standpoint in order to make this happen during a very difficult time. Nynette, Jeremy, Mikaela, Inoke, all of the Samoan athletes at the Games.”

He thanked his parents, his sister, grandparents and family, his coach, colleagues and his hometown of West Branch, and Samoa.

Rose, who is from the city of Grand Rapids in Michigan in the United States, was allowed to compete under the Samoan flag because his father is a native of Samoa.

Samoan engineer brings culture into technology to give Pacific community a voice.