The circulation of the new blue banknote marks a first in Samoa's financial history, as it would be the first time for the country to use polymer since 1990.

Speaking at the commissioning of the new banknote, the Minister of Finance Sili Epa Tuioti said it was an important milestone for the Central Bank.

"This banknote marks not only an important milestone for the Central Bank towards Samoa’s evolution for Samoa’s currency, but for the nation as well.

"The design and technical changes made by the central bank significant and enterprising with the inclusion of Samoa’s unique design onto our bank notes," he said.

The Minister made it clear that the bank note is limited addition as they "printed only one million of the commemorative banknotes and at this time we do not envisage adding to this number."

Sili also announced that the new bank note celebrates the youth of Samoa and its sporting legacy, and displays images of the va’a, rugby and weightlifting, which are all popular sports in Samoa.

"The back of the note illustrates vertically images of the daily activities of a Samoan youth, which includes gathering coconuts, playing rugby on the beach and rowing a canoe to go fishing.

"These are all vital features of developing and nurturing those skill sets which will someday see them realize their sporting dreams," he added. 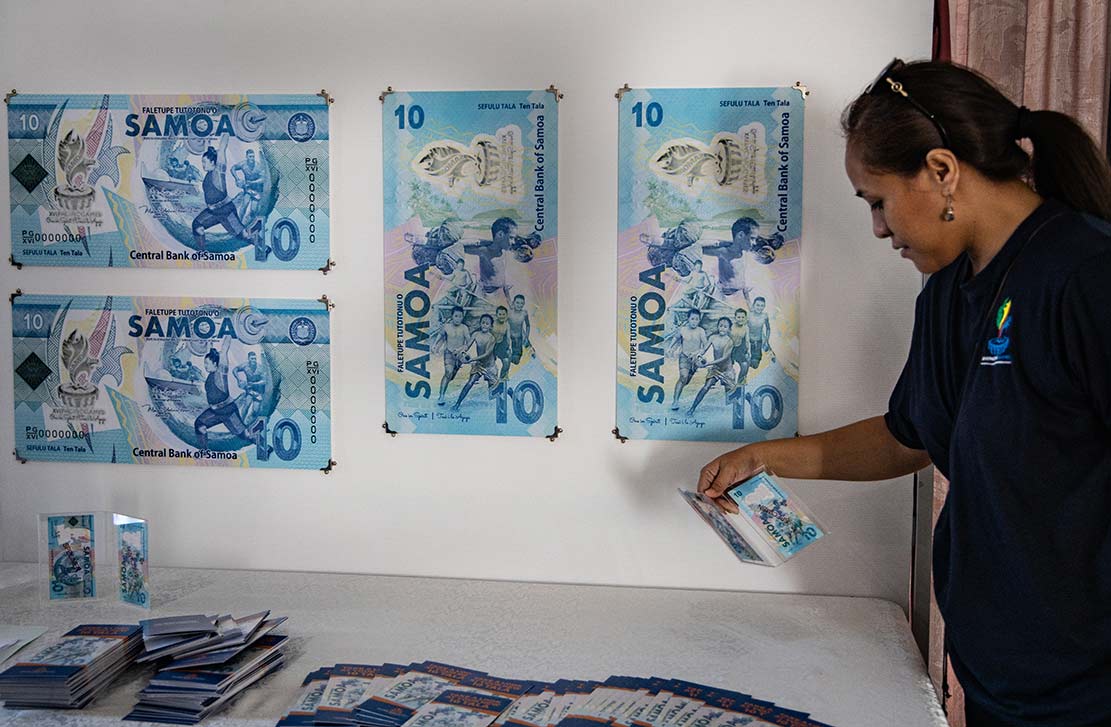 The Minister also revealed that it is the first time for Samoa to have a banknote which is vertically orientated.

The Education Sports and Culture Minister and Pacific Games Committee Chairman, Loau Keneti Sio, acknowledge the work of the Finance Minister and the Central Bank for their contribution in promoting the Games next month.

"You are the man. No doubt this is a great milestone and I trust this will promote Samoa for miles, through this banknote and the Games to the countries overseas," he said.

The $10 tala banknote will be the second polymer to be issued in Samoa. The new substrate and innovative security features will help to deter counterfeit while making it easy to identify a genuine note.

It will also feature a see through window depicting the Pacific Games logo, and a tactile embossed feature to assist the visually impaired, and both are unique features of polymer banknotes.

The carbon neutral banknote launched by the C.B.S. in partnership with De La Rue — is a landmark both are proud of in terms of leading the industry in helping combat global climate change and encourage more banks to produce sustainable currency — as 85 per cent of all global payments are still made with cash.

The carbon impact of both the materials and manufacturing process used to create the banknotes have been calculated and offset, by supporting a high-quality power generation project in Indonesia through collaboration with Carbon Footprint Ltd.