A spokesman for the U.S. Department of State, Ned Price as he introduces U.S. Secretary of State Antony Blinken. (Photo: ABC News)
TM
By Tina Mata'afa-Tufele, 28/07/2021

The official “Election of Fiame Naomi Mata’afa as Prime Minister of Samoa” statement from the U.S. Department of State was issued on Tuesday morning, the day after former Prime Minister Tuila’epa Dr. Sa’ilele Malielegaoi finally conceded.

The brief statement, composed of three sentences, is signed by Spokesperson for the U.S. Department of State, Ned Price.

Mr. Price, a former NBC News analyst and contributor and lecturer at Georgetown University, serves under the leadership of the 71st Secretary of State Antony Blinken.

The United States looks forward to working with Fiame, he said.

Samoa’s former Prime Minister Tuila’epa was thanked for his “friendship.”

“We look forward to working with Prime Minister Fiame Naomi Mata’afa and Samoa’s new government.  The United States thanks former Prime Minister for his longstanding friendship.” 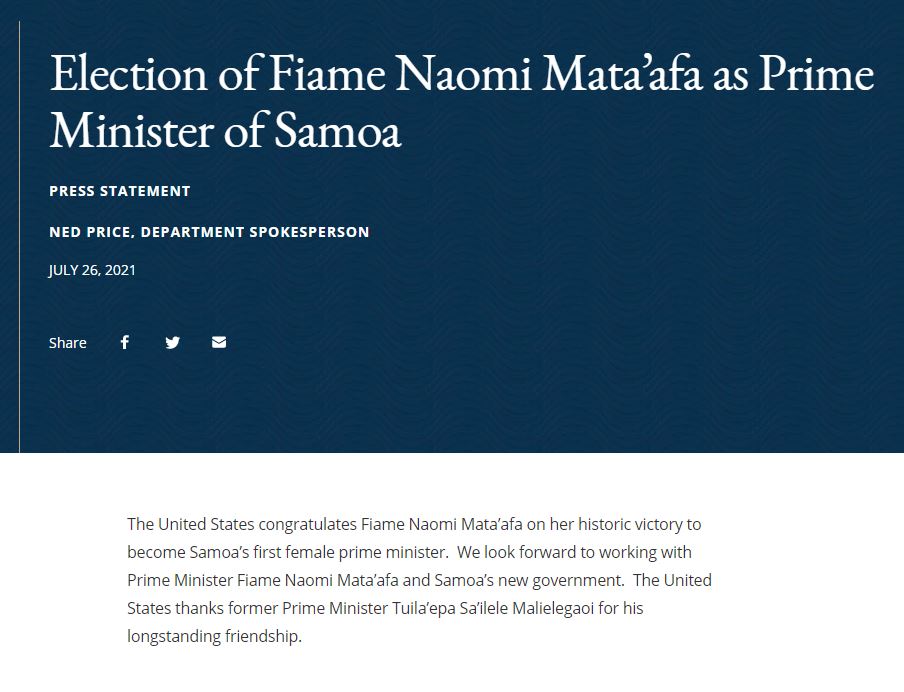 The statement is published on the official website of the U.S. Department of State.

Prior to his time at the White House, he was at the Central Intelligence Agency, where he was a senior analyst and Spokesperson.

In May, Mr. Price commented on the “aftermath” of the 9 April General Election in a tweet.

He called on all of Samoa’s leaders to respect democratic processes and uphold the rule of law.

“In the aftermath of the general election in Samoa, the United States calls on Samoa’s leaders to respect democratic processes and uphold the rule of law. We urge the people of Samoa to resolve their differences peacefully,” Mr. Price said. 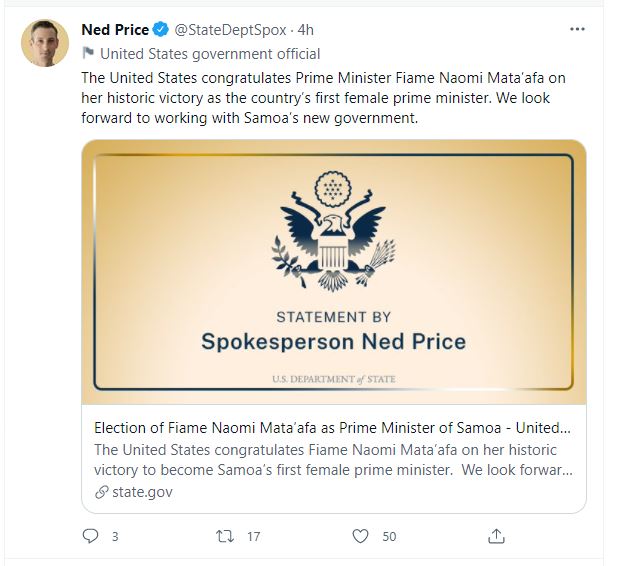 In mid-July, U.S. President Joe Biden nominated former U.S. Congressman Tom Udall for U.S. Ambassador to New Zealand and Samoa, a post that has been vacant since December 2020.

If confirmed by the U.S. Senate, he will succeed Scott Brown who served in the diplomatic post during former U.S. President Donald J. Trump’s administration.

“Tom Udall is a terrific guy, good friend and great pick by the President of the United States to be the next ambassador to New Zealand and Samoa,” Mr. Brown said in a tweet.

Kevin Covert, Chargé d’affaires at the U.S. Embassy in New Zealand said on Twitter, he “is very excited about the future of relations!”

“Fa’amalo (congratulations) to the newly-elected P.M. of Samoa, Honourable Fiame Naomi Mata’afa! And heartfelt congratulations to the people of Samoa on a historic, peaceful, democratic election,” Mr. Covert said.

“I had the pleasure to meet with Samoan High Commissioner Leasi Scanlan to discuss future opportunities between [the U.S.] Department of Defense and Samoa,” said Mr. Covert.