Two prisoners who escaped from Tafa’igata in February went on a crime rampage wreaking havoc in the community by breaking into properties, stealing tens of thousands of tala and threatening innocent lives.

On one occasion while they were armed, they entered a family home where only two young girls, aged 4 and 7 years, were present. They threatened them with a knife and helped themselves to food on the family’s dining table.

During another robbery, they choked a Chinese businessman, assaulted his wife and held their children at knife point.

The 21-year-old was sentenced for a chain of armed robberies, burglaries and theft he was involved in when he and Pati Chong Nee, broke away from jail during a prayer service at the beginning of the year.

Their first victim was a 40-year-old female of Aleisa and New Zealand. The woman had left with her family for a trip to Falealili when Vaelei broke into their family home, stealing properties and money to the tune of $1,500.

The second offending took place at Vailima where the criminals found two girls alone inside the house. The Court heard their parents had gone shopping.

Armed with a machete, had asked the girls inside the house to open the door as they were hungry. The Court heard the men proceeded inside and ate the family’s food. When they were done, they helped themselves to properties worth $27,345.

At Moamoa, the prisoners broke into a shop and stole cigarettes and other goods with a total value of $1,526.

But they were not done.

The men broke into the home on the second floor. A 15-year-old girl spotted them and woke up her parents. When her father went to check, the men who were both armed with machetes, caught him, choked him and dragged him downstairs.

These were among some of the most serious crimes the men committed.

The men’s behaviour was strongly condemned by the Justice Tafaoimalo, who expressed particular concerns about the incident at Vailima where two girls were found at the house alone.

“The accused and co-accused were armed,” she said. “They ate then stole property to the value of $27, 345.00. This experience would have been terrifying for these very young children.

“It concerns me that these young children were left at home alone and I caution parents, in particular these parents against leaving children this young at home by themselves. Fortunately for these children they were unharmed.”

About the attack on the businessman at Vailoa, Justice Tafaoimalo said this must have been a terrifying ordeal for the family.

“The victim’s two teenage children ran terrified to their bedrooms,” she said.

“They had both witnessed the violence being inflicted upon their parents. It is a struggle to fathom that this happened in Samoa, as they say ‘this is the stuff of movies’.

“The public needs to be vigilant as home invasions have become more violent and as we saw just last month, a Chinese victim of a home invasion was killed.”

Before Justice Tafaoimalo, Vaelei pleaded guilty to 15 burglary and robbery related charges on separate occasions. He was given 10 more years in jail, on top of his current sentence.

Vaelei has been a regular feature in the Court for a history of crime dating back to 2013.

“You have shown no remorse for any of your actions. You have become a violent offender.”

Justice Tafaoimalo pointed out the only option open to the Court for him is to keep sending him to prison if he continues to commit crimes.

“You will have to reassess whether this is the way you want to live your life,” she urged Vaelei.

“When you come out of prison you will still be a young man. Do not choose to waste your life in prison, as the Courts will not hesitate in sending you back to prison for as many times as it takes to deter you from criminal offending and to protect the public.”

Justice Tafaoimalo also lamented the absence of his family, church and village.

“The Court has been the only institution which has tried to assist the accused.”

She noted that Vaelei had become more than just a burglar, he is now a violent offender who has no regard for people’s home or their lives.

“There is an urgent need to address this type of offending, which involves potentially lethal weapons used by offenders such as the accused with no regard for human safety,” she said.

“The reason for the weapons is no doubt to intimidate, threaten, frighten and perhaps ultimately kill.

“The sentence today will be a deterrent sentence as we get closer to the high risk period of the festive season and is firmly aimed at protecting the public.” 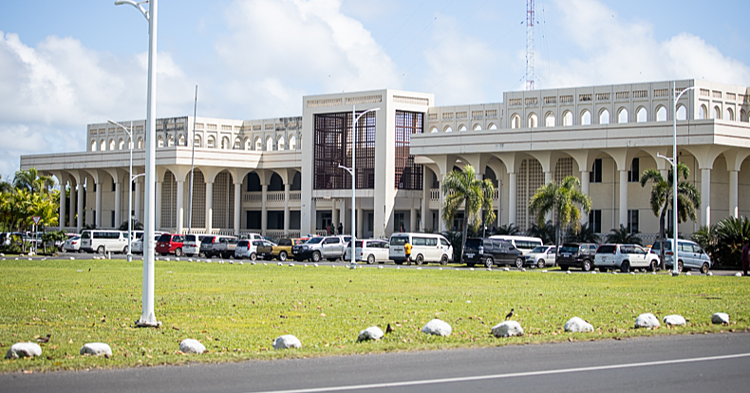