La'auli tells of efforts to resolve conflict with Peseta

Former Speaker and senior Member of Parliament, La’aulialemalietoa Leuatea Polataivao, spoke about the conflicts and struggles faced by the Local Partners and Associates nonu company during its early days of operation.

La’auli told the Court that he had tried to resolve the conflict with Peseta and do what is for the best interest of the nonu company.

Associate Minister of the Ministry of Prime Minister and Cabinet, Peseta Vaifou Tevaga went into business with La’auli and Apulu Lance Polu with hope to export nonu juice to the Chinese market and abroad.

“Peseta had raised concerns during the meeting (with the National Provident Fund) and was worried about his land used to secure the loan,” said La’auli.

“I had told him not to worry I have already offered my property as a replacement for his.

“But he wanted to leave the company and have his land released.

“He also said he will give up his shares in the company. It was disappointing because our partnership has been divided, but at the end of the day I felt this was for the best for everyone to let him go, and release his land so we can no longer be in conflict.”

La’auli was continuing his evidence on Tuesday into the trial scheduled for six weeks in relation to some 105 charges the senior M.P. faces with his wife and business partners.

His wife Heather Schmidt, Apulu, Martin Schwalger and Tuitui Aiolupo have pleaded not guilty to the charges that stem from a dispute over the operations of the L.P.A.

The M.P. testified that following the meeting with N.P.F. in 2014 his main priority with Apulu at the time is to make plans in updating arrears with the fund.

During the meeting with the fund, the Court heard that a letter of foreclosure was issued for L.P.A.

Now that Peseta has announced his intention to leave the company, La’auli said they then moved to open up a cheque account in April 2014 under the name Samoa Nonu Delight.

According to La’auli this was an agreement in one of the meetings to setup the account so that it was not necessary to chase after Peseta who was the main signatory to the L.P.A. account.

“After the meeting with N.P.F. we met with La’auli and Martin to discuss the restructure of the company,” he explained.

“The whole purpose of this is so we can attend to what is required from N.P.F. to meet the payment of $300,000 a month for the loan.

“Part of our plan is to make new promotional activities. The proposed plans were highlighted in a letter to the N.P.F. which had also include that I am appointed to be involved internally with the operations of the company and to resolve the issues encountered.”

In 2014, La’auli said he felt there was a big change in the state of the company.

There were more orders and also other revenues were coming in from hiring of company trucks and vehicles to generate extra income.

However, at the end of 2014 a letter was received from Vailima Breweries who were hiring trucks from L.P.A., that they wanted to terminate the contract. 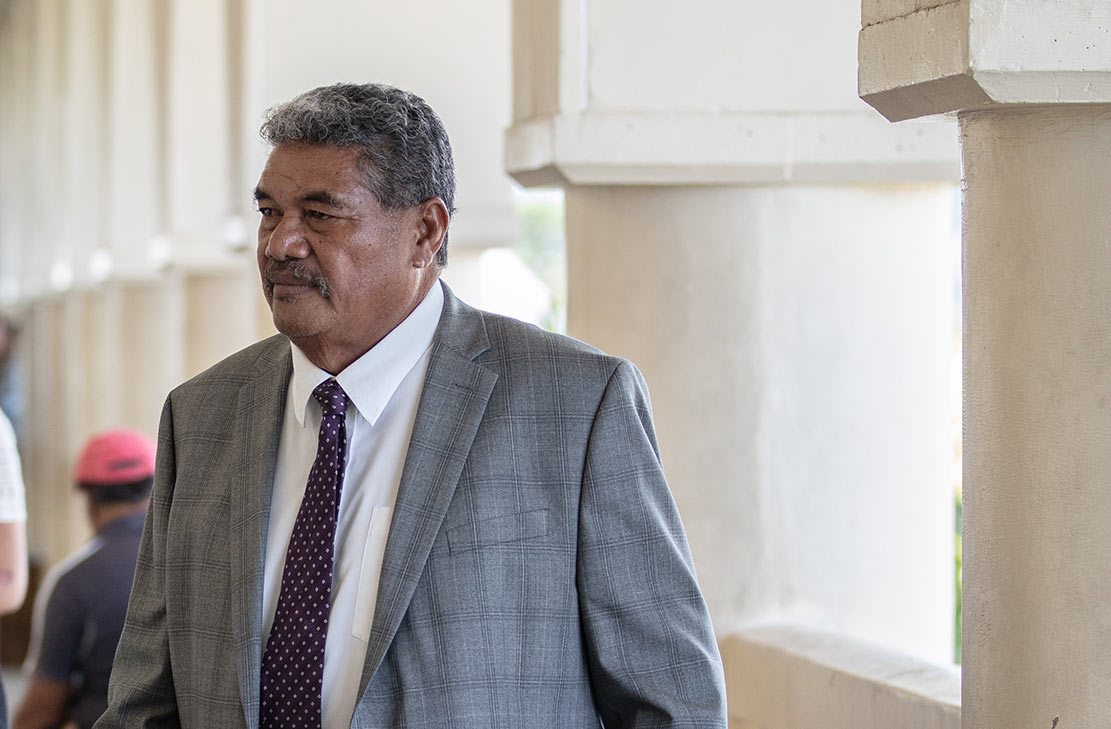 This is despite the struggling company relying on the income from Vailima and had provided a service based on their partnership.

“I had gone to them and asked why they have terminated the contract and we were offering good service and the trucks were also in good working conditions,” said La’auli.

“But I was told that Peseta had been continuously disrupting them, threatening to sue them and our company for the use of the trucks, and that brought the contract to an end.”

The Court heard that Peseta also approached Garry Vui, another business partner of the nonu company, telling him not to place any more orders from La’auli and Apulu.

Regardless of the continuous disruption, La’auli and Apulu were determined to plan ahead to secure more orders for the company from Fiji, Asia and China.

La’auli also spoke about going out to the villages to collect nonu and paying farmers for their nonu buckets.

He said there are not less than 2000 individuals that supply nonu and are paid in cash on the spot upon collection of nonu.

Questions were also put to La’auli about two cheques that were cashed and lodged to the Maota Samoa.

He explained that after the meeting with N.P.F. they had looked at ways to invest in the company and to cut expenses for the company.

“This is the only way to save money for the company is to have its own nonu farm to supply its order,” said La’auli.

“The farm will ensure that nonu fruit is available all the time and make quality control on nonu.”

The Court heard that the 27 acres of land was a piloted land in Upolu to support the Pure Pasifika in supplying nonu.

The hearing continues on Wednesday.

The eight Samoan deportees in Fiji have been cleared of the virus and will be leaving Nadi, Fiji on Sunday, February 23. They arrive Sunday afternoon.