Samuelu Patu helping the S.F.E.S.A. carry an injured player on a stretcher at the Vodafone National Sevens Series. (Photo: Supplied)

It could be considered among the least likely of careers on a playing field for a young man to aspire to: becoming trained in rugby - not to play the game itself, but give first aid to injured players.

But Samuelu A.J. Faameo Patu of Vaiala and Faatoia, says that attending to injured rugby players is his calling.

The 22-year-old is taking up First Aid in Rugby (F.A.I.R.) training where he receives training on rugby-specific first aid skills; his journey started last year at the 2020 Vodafone National Sevens Series.

“The Vodafone Sevens last year which started in Savai’i, was my first time to perform first aid on players,” he told the Samoa Observer.

“At the time, I was a coward and nervous because I might make a wrong move.

"But I’m grateful for the support from our physiotherapist Elvera Lam and also Miss Avii Faalupega (the first female referee) for their guidance and advice." 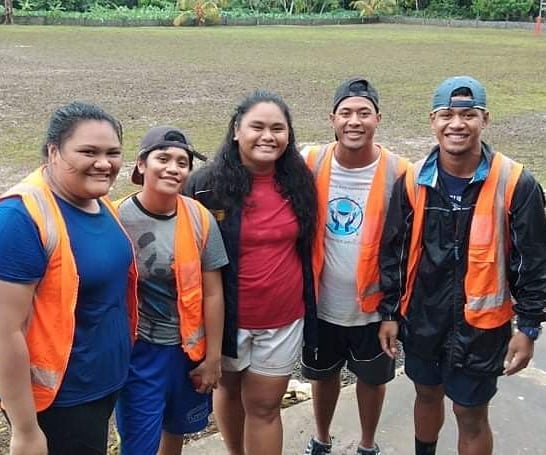 Patu said becoming involved in various tournaments enabled him to build his confidence including participating in games in the rural community.

“After that game, and many other tournaments followed suit and it helped build up my confidence and I have learned a lot from the previous games," he said.

"We also had the chance to be a part of [...tournaments] held in [...rural] areas, these are the games where a lot of people will be eyeing what we do on the field and see if we are performing the right procedures or the treatment given is right."

For Patu, every tournament also has its challenges; medical staff deal with all kinds of people and are often called names.

But he only worries about one thing: the welfare of the player he is attending to.

“There are a lot of names that people called us, like the black cross and other names that I don’t want to say, but I ignored them because my priority is the welfare of the players," he said.

For the budding first-aid specialist, the Lakapi Championship Super Four was where he cut his teeth as an aid giver.

“We (F.A.I.R.) were divided into the four teams and I was selected to be Manono’s F.A.I.R. member, and this was the winning team," he said.

"I was present during training and during the games for the tournament." 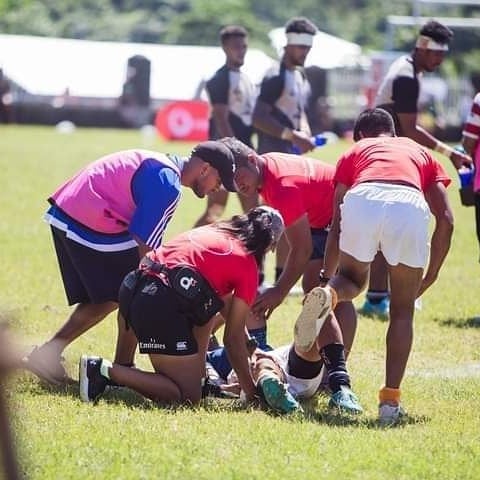 Patu said when he was in nursing school, he thought he knew everything, but now believes that there is still so much more left for him to learn.

"Right now, I have the knowledge of what to do when accidents occur to players, especially in cases such as concussion, seizures, dislocations etc.

“These are the cases that are so hard to handle but praise the Lord because now I can handle it due to the support from my team.”

And Patu believes teamwork got him to where he is right now.

“I want to thank our General Manager Victor, Mr. Seumanu, and the whole Lakapi Samoa staff for this important programme to help the players of our country.

“I also want to acknowledge our F.A.I.R.’s team efforts.

“If there are any rugby clubs in need of first-aid, we are available and we would be very happy to lend a hand. Our job as first-aider is for everyone."

According to Patu, the job is very challenging but he gives thanks to the Lord for helping him out.

“The work we do is very challenging, but I thank God that I can handle these challenges. I believe I can do everything with God," he said.

“The most challenging part of the job is trying to balance it with my school schedule.

“Also, [I am] trying to get used to the boys' attitude, some are very polite and respectful but some are very rude especially when they’re mad [about] something that happened [in] the game, then they tend to take it out on us.”

Patu added that he is now preparing for the Sevens trials which kick off on Thursday and Friday mentally, physically, and spiritually.

“I’m doing research on the World Rugby [website] because I am uncertain whether the casualties of this week will be worse than the casualties that we’ve experienced before," he said.

“It’s best to be prepared for any sort of casualties so that when it happens at least I will have an idea of what to do.

“And from all those things I put my trust in the Lord to help guide and protect me in all that I do.”

And one lesson he can draw from his brief experience working at F.A.I.R. is the value of calmness in the face of adversity.