Students from 11 countries graduated from The University of the South Pacific (U.S.P.) last Friday, which the Vice Chancellor says attest to its growing international profile.

Speaking at the graduation at the Maota o Tupulaga, EFKS Hall at Sogi last Friday, Professor Pal Ahluwalia said one of the highlights of the ceremony was that students from 11 countries graduated which included three non-member U.S.P. countries and is a testament to the growing profile and attraction of the regional university. 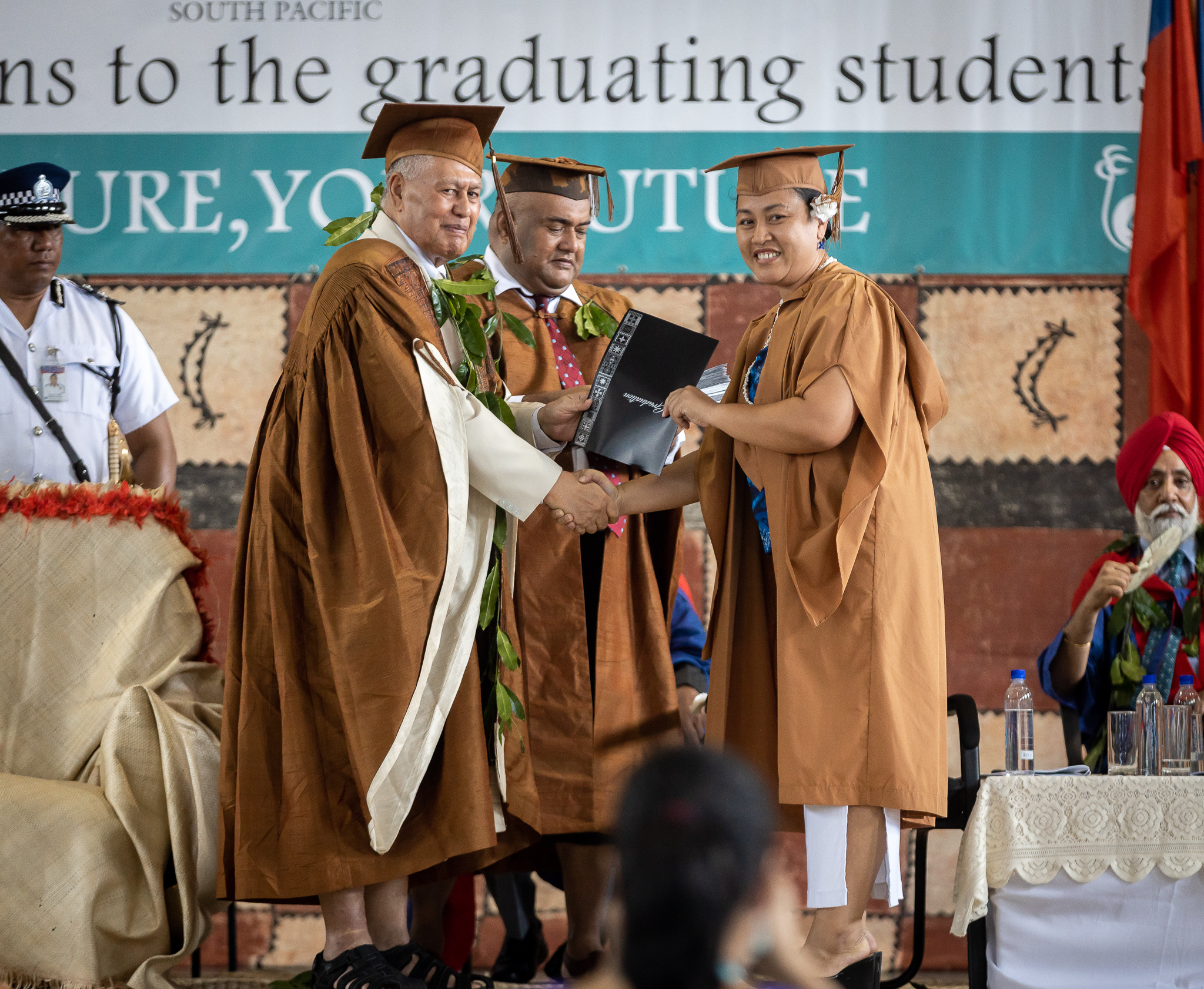 He said the graduation is also a milestone for each one of the graduates as well as their families, friends, supporters and even employers and mentors who contributed to their overall success.

"At this juncture, I would invite you, our graduates, to stand up and with a warm round of applause, join me in thanking your family and friends who have sacrificed much for your success," he said. 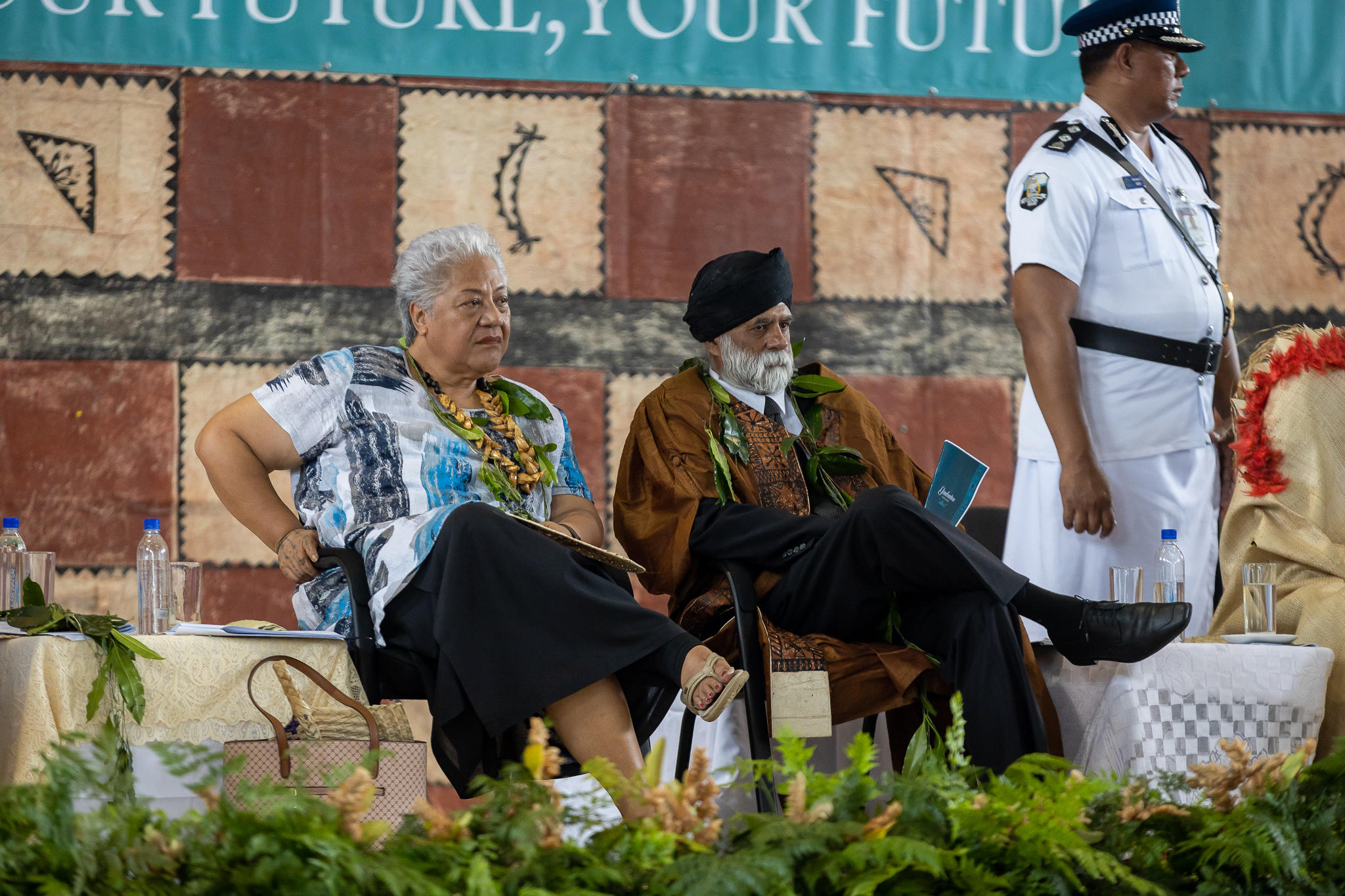 The statistics on the number of graduates with different types of certificates were also highlighted by the Vice Chancellor, who indicated that a total of 270 graduates received their certificates, diplomas and degrees. 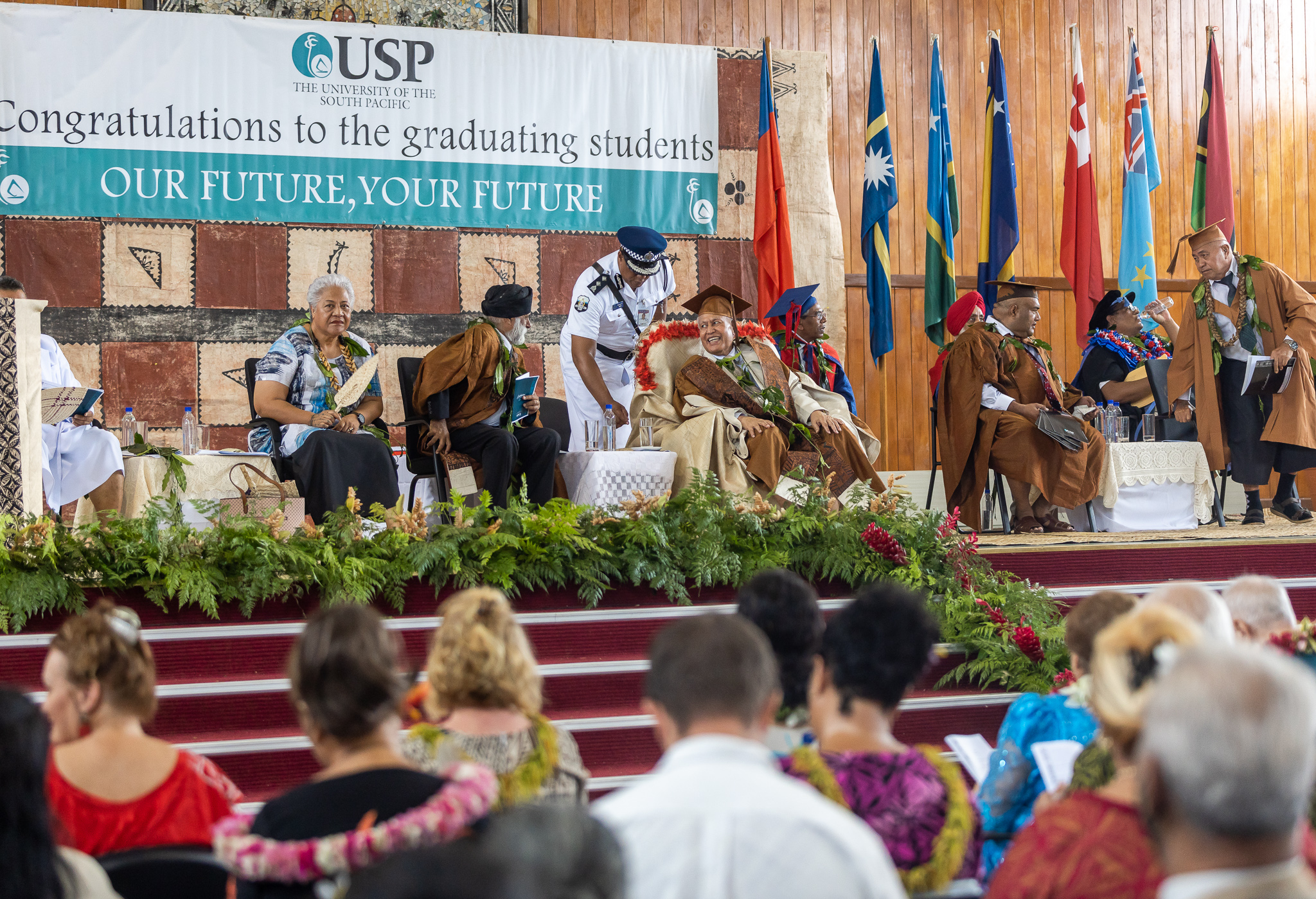 "Of the 270 students, 51 per cent are from our Pacific TAFE programmes and 30% are awarded from our undergraduate programs.”

A total of 50 postgraduate certificates were also awarded by the U.S.P. according to the Vice Chancellor, of which 30 Master Degrees. 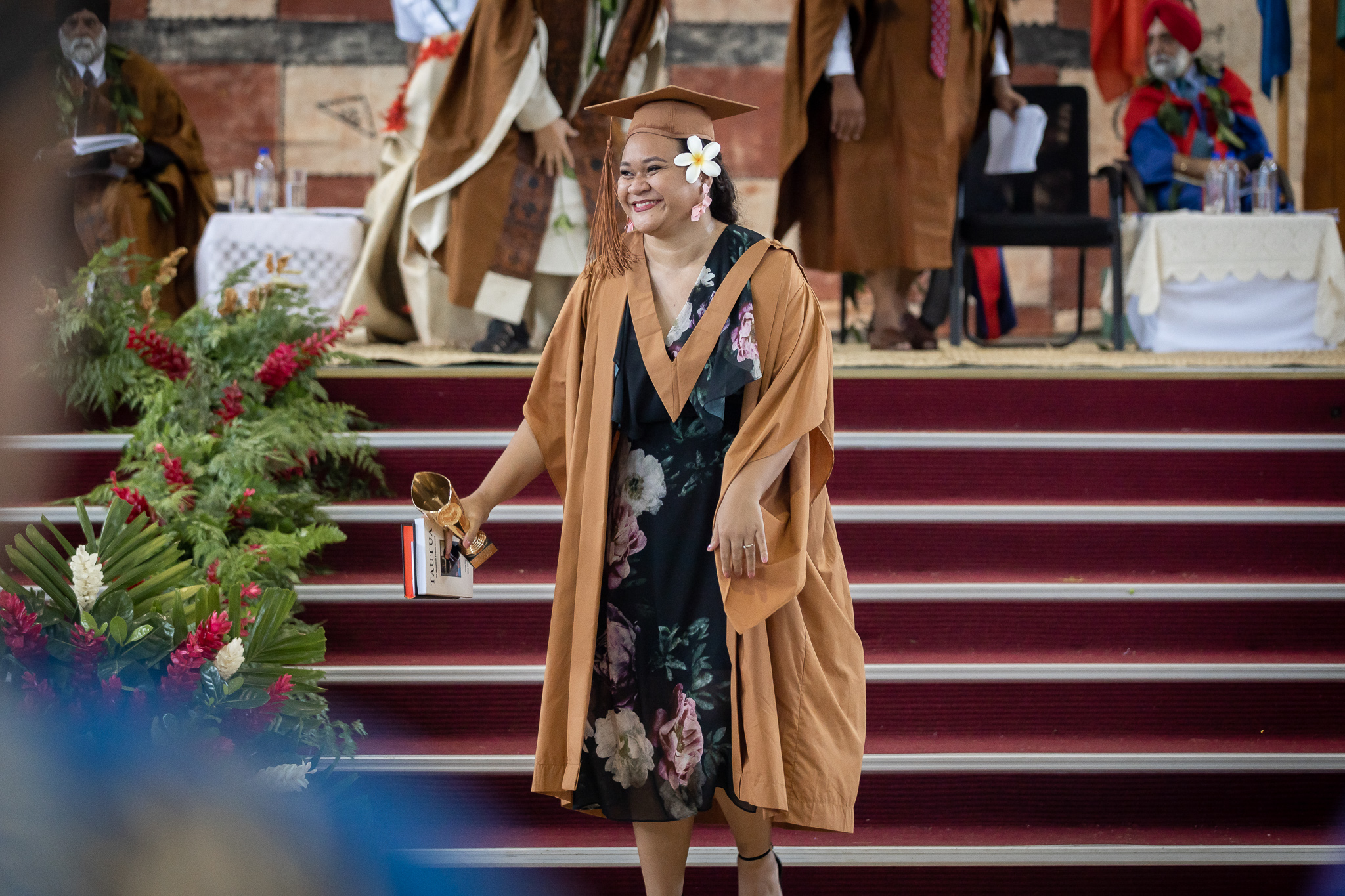 Prof. Ahluwalia said the benefits of the pursuit of knowledge is building and supporting full participation in a civil society, and preparing leaders for a diverse and global environment.

The success of the regional university was also not lost on the head of the university, with the Vice Chancellor making reference to the ranking of the U.S.P. on the Times Higher Education Global Ranking System in his speech. 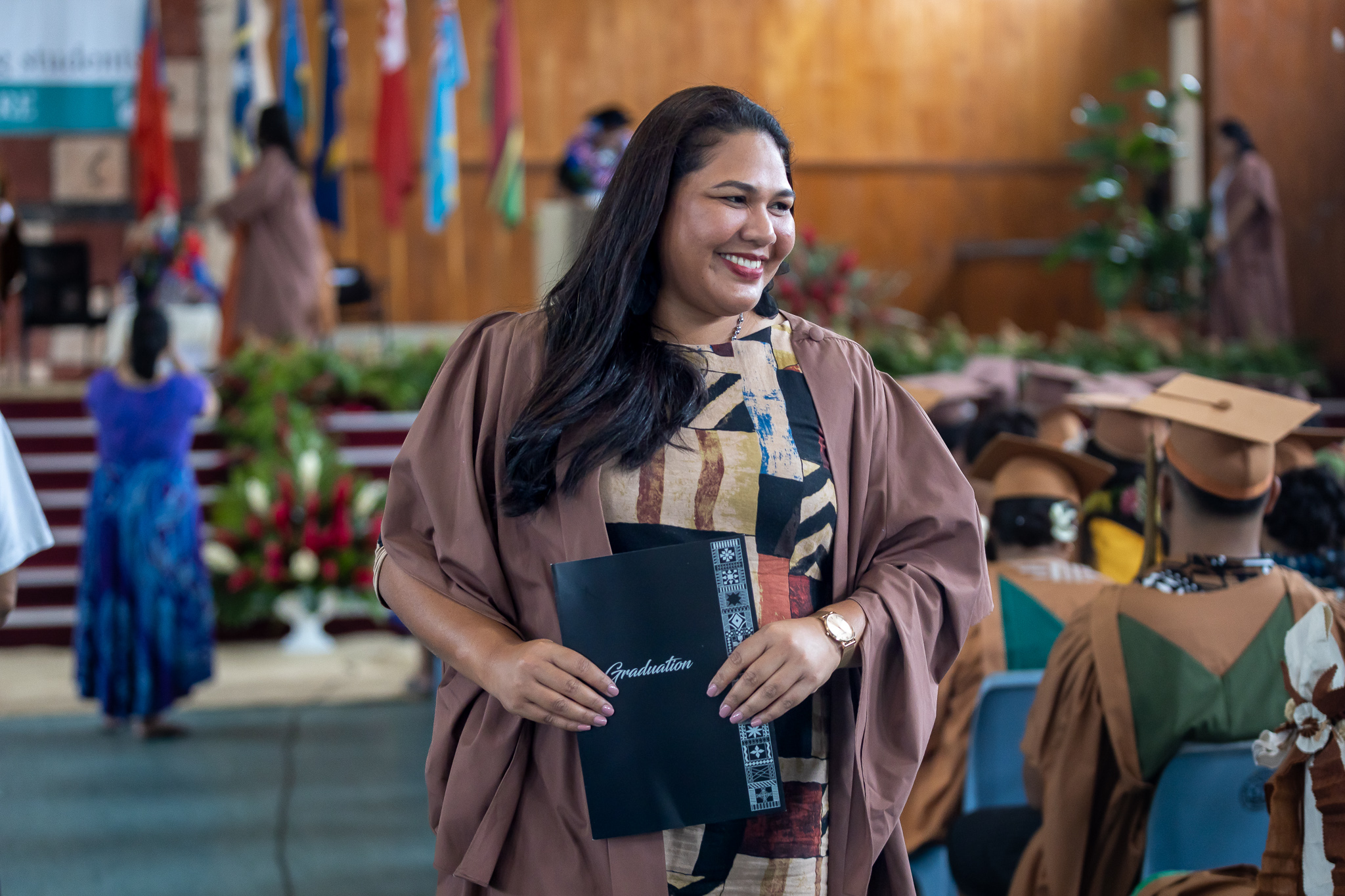 "The U.S.P. has achieved global rankings in the highly prestigious Times Higher Education (THE) Global Ranking System saw us [U.S.P.] amongst the top 10 per cent of universities in the world,” he said.

“We are also delighted to be ranked highly in the Times Higher Education Impact Rankings, a recognition of our efforts toward achieving the global sustainable development goals. 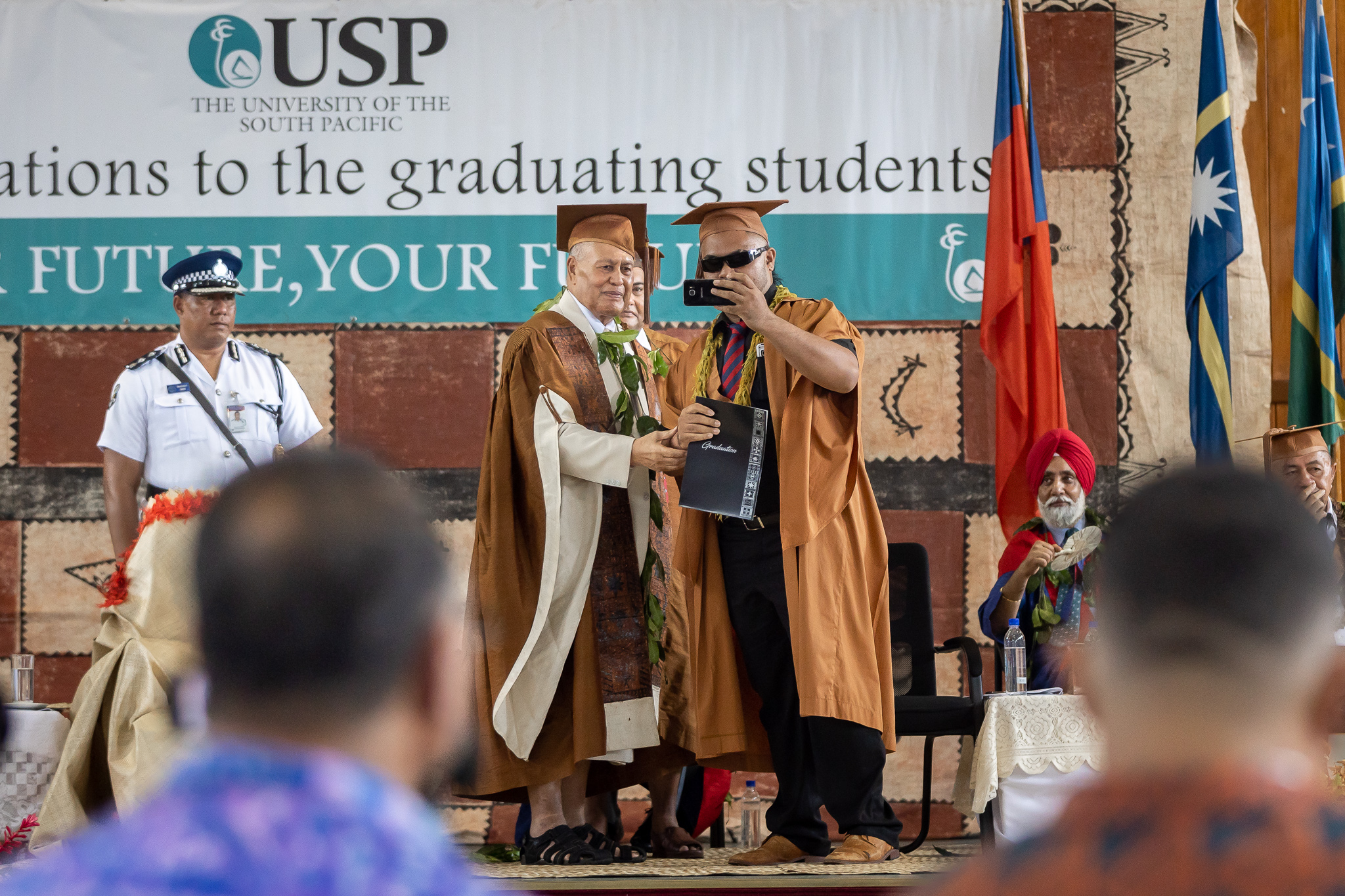 “Despite the challenges of COVID-19 U.S.P. has managed to rank 12th against some of the top Universities of the world in the area of crisis management. 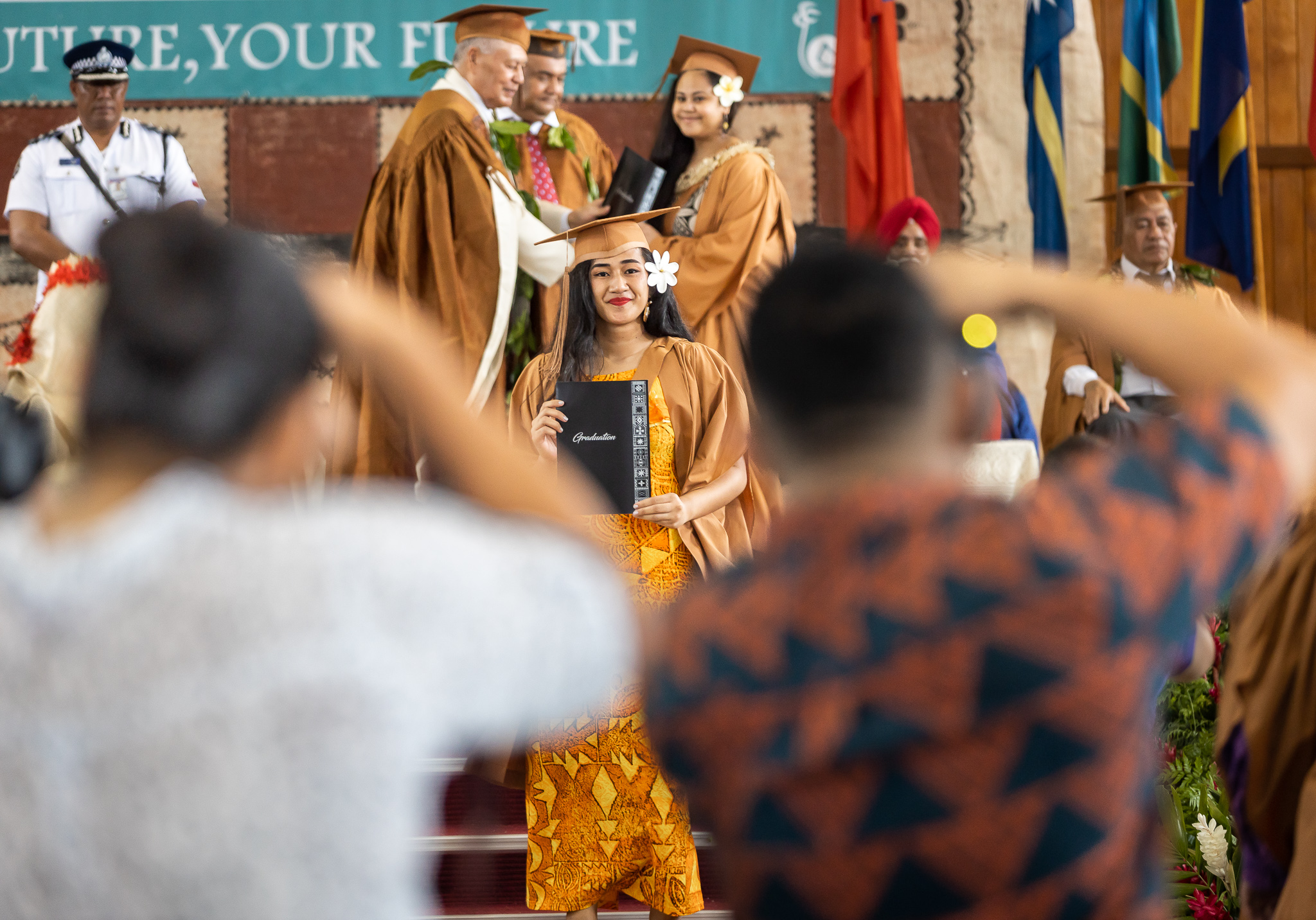 "U.S.P. also ranked in the top 151–200 in the latest Shanghai Rankings through the Discipline of Tourism and Hospitality Management under the School of Business and Management.

“In addition to this achievement, U.S.P.s Political Sciences also made the latest listing, ranking between 301–400.” 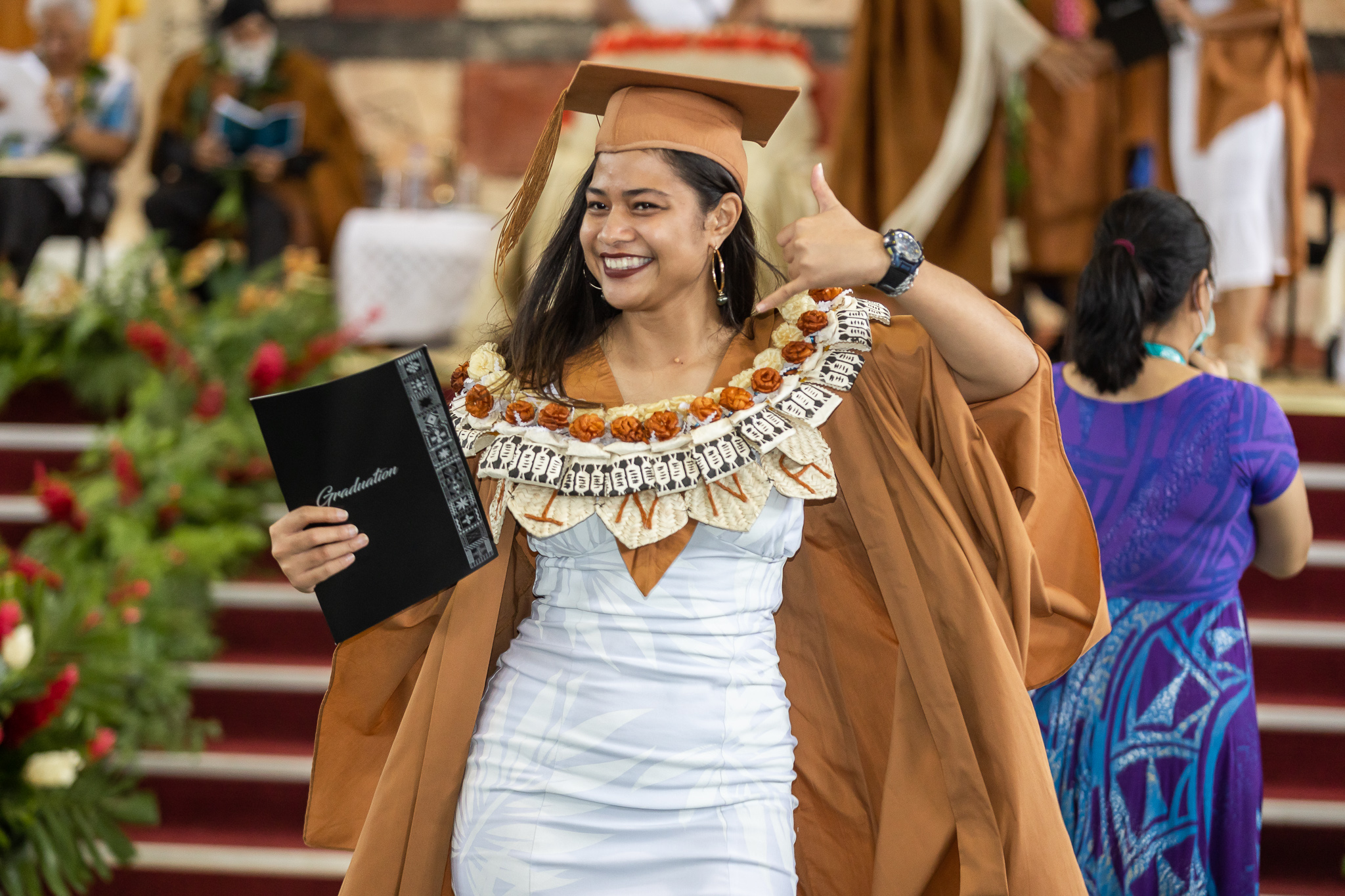 Prof. Ahluwalia also acknowledged the support of the regional university’s Member Governments, Council and its Committees, the Senate and its Committees as well as development partners, the students, the Campus Director, staff and all the U.S.P. Samoa community.

"I especially wish to acknowledge and thank the Chair and members of the Samoa Campus Advisory Committee,” he said. 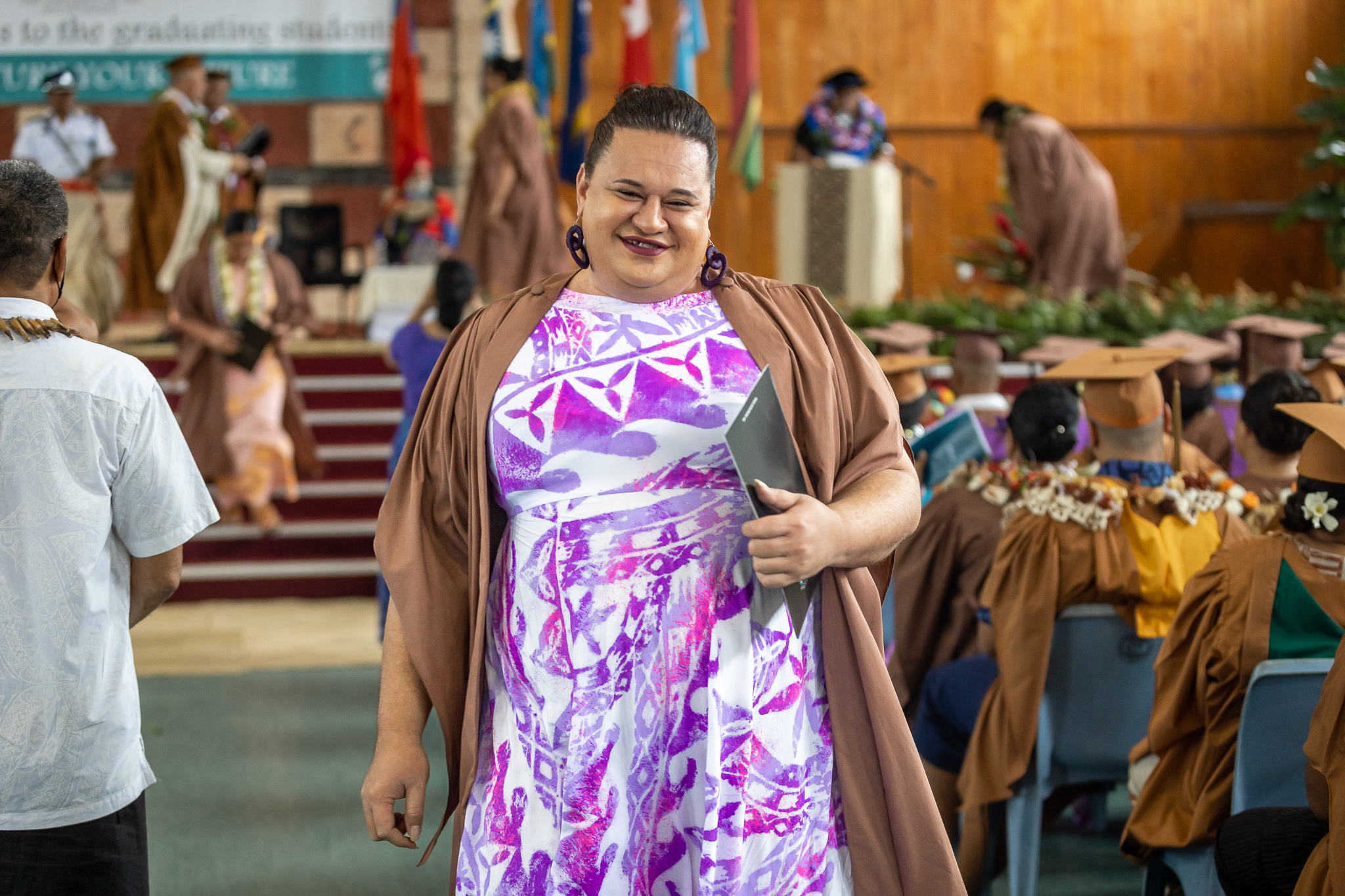 “What we have achieved is a collective effort that I hope we will continue together on our journey of excellence.”

In shaping Pacific futures Prof. Ahluwalia said they continue to grow the size of their alumni network to 55,000 people who in the last 50 years have contributed to the success of the region through their distinguished careers and service, both in employment and in the community.

He encouraged the graduates to continue in the new norm to shape the future of the Pacific. 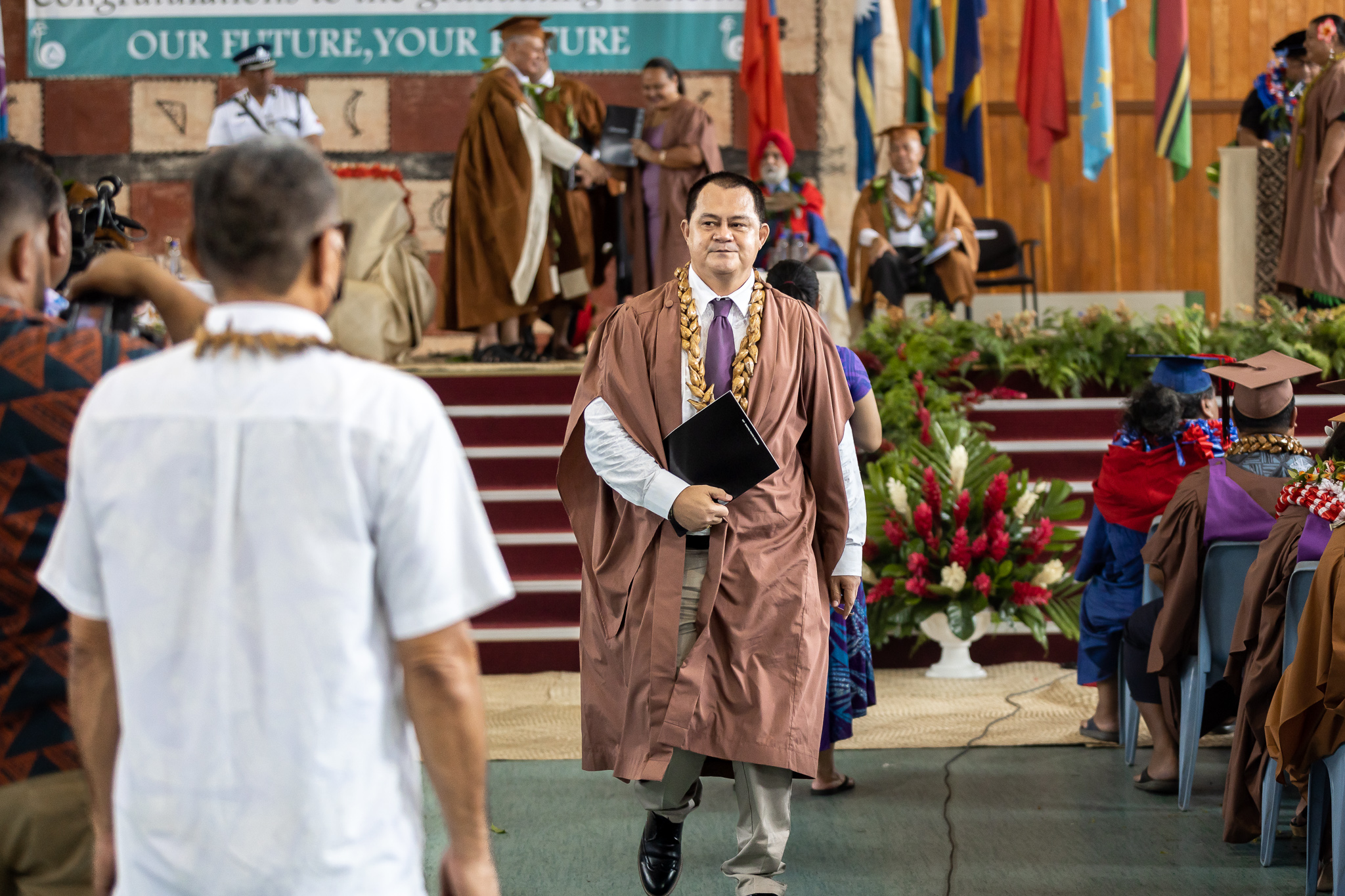 "In everything you do – exemplify excellence, embrace innovation, uphold the highest ethical standards and operate with integrity; be respectful to all, celebrate diversity and above all, never settle for second best because you have the potential to do anything that you set out to do," Prof. Ahluwalia said.

One of the university’s graduates last Friday, who graduated with a Professional Diploma in Public Sector Management and works for the Ministry of Education Sports and Culture, was elated at finally finishing her program with flying colours.

"I dedicate this achievement to everyone that supported me throughout to the end, especially my father, Toetā Solialofa Oti who has a health condition but he made things easy when offering to look after my children every time I go to class," Meritiana Oti-Ng Lam said.

“My husband Aukusitino Ng Lam was my number supporter. Whenever he sees me struggling with assignments he would encourage me to keep trying harder and seek an expert's help.

“My older kids were my best supporters too as they would offer to do all the chores and let me concentrate on my school work and when I get marks I come home and show them to make them feel happy and convince them that I am serious about studying and now when they saw me graduate they want to do better in school and graduate like me.

"I also thank my church leaders, families and friends who always have that one say in your life like ‘hey, you should get a degree if you want to become a C.E.O.”

Another graduate, Afamasaga Michael Soonalole, told the Samoa Observer that he graduated with his Masters in Business Administration as well as a postgraduate certificate in human resource management.

"I acknowledge the support of my parents, spiritual parents of EFKS Alamagoto, my wife and our children and families and friends," he said.