The United States of America (U.S.A.) has reassured Samoa and the Pacific that it is committed to do its part, and fronting up with the funds required, to meet the existential threat of climate change.

The assurance was provided by the U.S. Secretary of State, Anthony J. Blinken, during his visit to the Pacific, where he stopped in Fiji during the weekend.

"We’ve raised our own ambitions as one of the leading emitters in the world, and historically the largest emitter. It is our responsibility to do that. We’re encouraging and working with other countries to do the same," Mr. Blinken said.

"We’re making it very clear that, for all of the objectives that we set for 2045 or 2050, if we don’t take these steps now over the next years, over the next decade, we’re not going to get there, we’re not going to be able to meet the goal that we set of keeping warming to 1.5 degrees Celsius. So the United States remains committed to leading, to working with others on that."

The U.S. Secretary of State pointed to a commitment made by the US President, Joe Biden, who will work with the U.S. Congress to provide US$3 billion (T$7.72 billion) every year by 2024 towards what they call the Prepare Programme.

"Through Prepare we’re going to help more than 500 million people adapt and manage the impacts of climate change by 2030," Mr. Blinken said.

"One aspect of this is strengthening access to finance, which we know is one of the top priorities. USAID is working to help countries obtain direct accreditation to apply for and manage multilateral climate finance.  To date, we’ve helped mobilise more than $220 million in projects here in the Pacific." 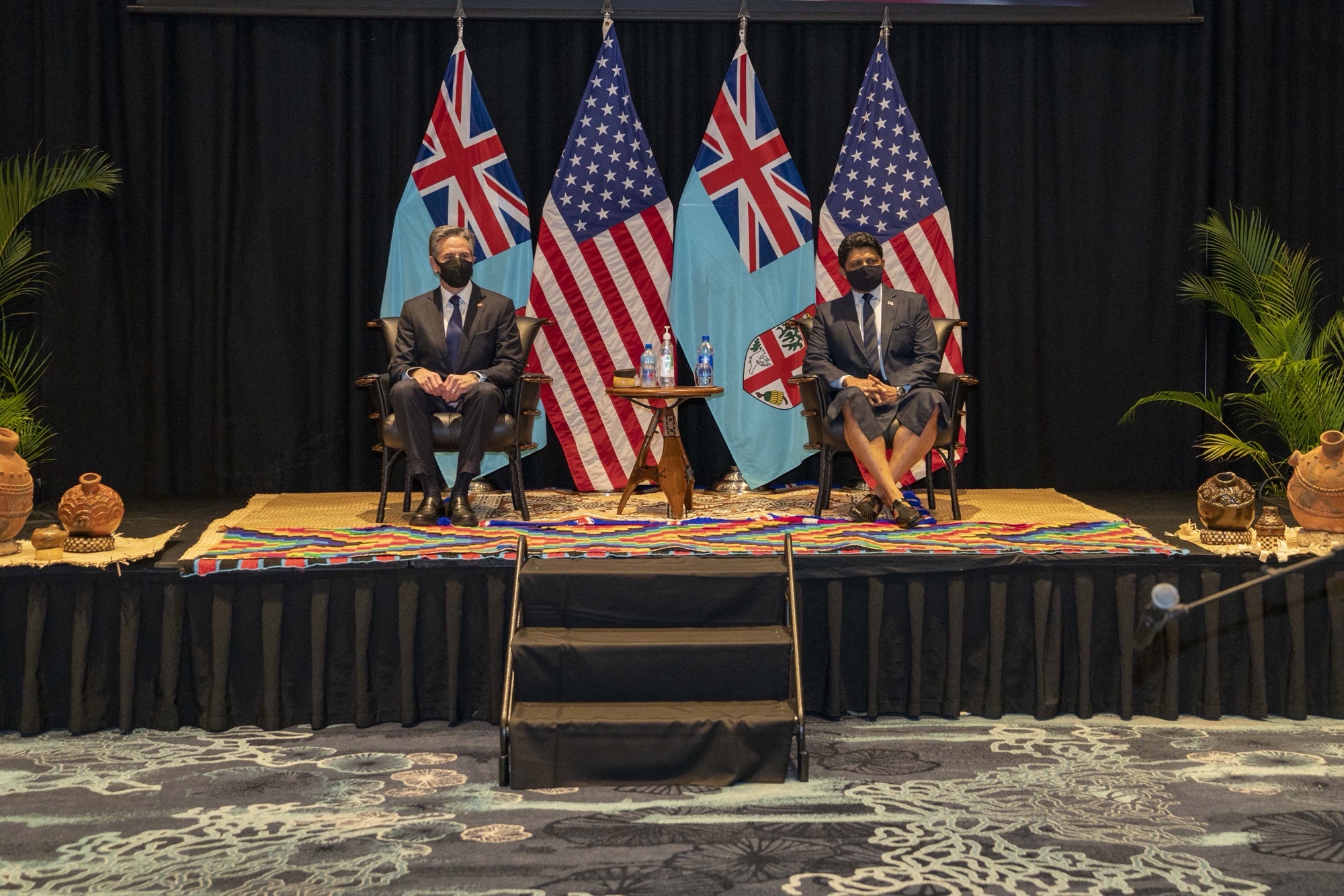 According to the U.S. Secretary of State, the Pacific Island nations have been leading voices, powerful voices, calling for the world’s major economies to take strong action to limit warming to 1.5 degrees Celsius.

"So yes, I think we spent a lot of time talking about climate change, about what we’re doing together to meet that, both in terms of the meeting that we had, but also in the meeting with all of our Pacific Island partners,” he said.

He also added that there are a number of common themes that jumped out, but that was certainly at the very, very top of the list.

“First, as you’ve seen over the last year, President Biden, the United States, is committed to leading this effort around the world to deal with climate change, to make sure that we meet the existential challenge of our time."

Furthermore, Secretary Blinken said the United States is urging other countries to help.

"We also have a responsibility to help – countries adapt, to build resilience, to make sure that they have the resources, that they have access to the financing and the technology to strengthen themselves, to be able to both resist the immediate impacts of climate change, and to adjust and adapt their economies, their systems, going forward," he said.

“We have a commitment to this. We have a responsibility to this. And what I want to just conclude with is that I think we’ve seen Fiji set the example, the first country to ratify Paris, but also signing onto, giving its voice to, the major initiatives that are necessary if we are going to really address this crisis.”

In addition, he said as an example, the Global Methane Pledge.

“Fiji’s not a large emitter, but the fact that it’s added its voice to this pledge I think is going to inspire other countries to take the pledge and make a very big contribution to curbing global warming."

Fiji's Acting Prime Minister Sayed-Khaiyum reminded that as a result of climate change, the Pacific is sinking.

“As a nation that shares many of our struggles and our values, America is uniquely positioned to be a direct partner to Fiji for peace and climate security not only across the Indo-Pacific but here in the blue Pacific,” he said.

The U.S. Secretary of State also assured the Pacific of its continuing support, through the Indo-Pacific Strategy.

“It’s the result of a year of intensive engagement and consultation with allies and partners across the region and beyond, and hearing directly from its people about what’s most important to them," he said.

“And it reflects the fundamental truth that no region on Earth will affect the lives and livelihoods of Americans more than the Indo-Pacific, which accounts for 60 percent of the global economy, two-thirds of all economic growth over the last five years.

“Every defining issue of the 21st century runs through this region:  the climate crisis, global health, the future of technology, whether nations will be free to chart their own path or be subject to coercion by more powerful nations.

“Our strategy is built on collaboration. We want to develop sustained, innovative, mutually reinforcing partnerships across the Indo-Pacific with our allies, our partners; with regional institutions like ASEAN, APEC, which the United States will host next year; the Pacific Islands Forum, which Fiji is chairing this year.”