Concerns by the private sector about a delayed Tax Invoice Monitoring System (T.I.M.S.) were on the agenda of the recent Samoa Chamber of Commerce and Industry monthly members' meeting.

The meeting was held earlier this week and hosted by the Australian High Commission at Sheraton Aggie Grey’s Hotel & Bungalows conference room.

This month’s meeting was attended by 96 Chamber members. 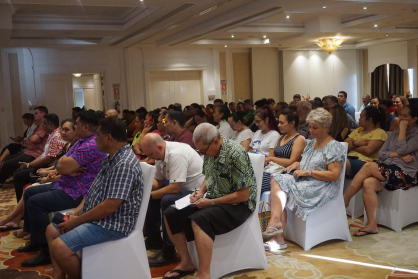 The Chamber President and Madam Chair, Seulupe Michelle Macdonald, and the Chamber Secretariat, provided an update on the organisation’s recent work.

Members maintained a lively dialogue during this month’s meeting raising topical private sector concerns such as the T.I.M.S., the ceasing of Samoa’s Daylight Saving Time policy and the Pacific Labour Mobility Scheme.

T.I.M.S. which is a plan to oblige businesses to record transactions in realtime in order to boost Government tax monitoring capability, was an initiative overseen by the previous government before being put on the backburner until after April's election.

Whether the new Government intends on following through with the scheme remains unknown.

The Secretariat update delivered by Member Services Manager, Lote Lima, further highlighted the national private sector organisation’s continued partnership with the Government, sharing with attendees some outcomes of various Government boards and steering committees that the Chamber sits in on.

The recent two-day business shutdown to facilitate the mass vaccination campaign and its impact on the private sector was also discussed.

A Chamber executive council member, Fa’asootauloa Sam Saili, provided a briefing from the recent Disaster Advisory Committee meeting for the information of Chamber members, outlining the lobbying efforts they had undertaken on members’ behalf.

The meeting also updated members on the progress of inter-governmental talks about the Pacific Agreement on Closer Economic Relations Plus (PACER Plus) regional free trade agreement.

“As part of that I will be putting forward some challenges [voiced by Chamber membership] as per the survey that was circulated by the Secretariat in regards to Pacer Plus,” said Seulupe in a statement.

Samoa became the first Pacific Islands nation to ratify the PACER Plus agreement in July 2019, joining proponents New Zealand and Australia. The agreement needs at least eight signatories in order for its ratification to take effect.

But the agreement has not been without controversy. Two of the region's largest states, Papua New Guinea and Fiji, both declined to sign up to the agreement, which critics have said advantages the region’s economically powerful nations.

A feature presentation of the evening was given by the Australian High Commissioner to Samoa, Emily Luck who noted this year marked a half-century of formal diplomatic relations between Australia and Samoa.

Ms. Luck brought attention to the various private sector initiatives Samoa has participated in such as the PHARMA Plus program and the Agribusiness Support project.

The Business Partnerships Platform (B.P.P.) is the most recent initiative that was launched in response to COVID-19 in an effort to help build recovery and resilience for businesses. Through this programme, two partnerships were established with local businesses including Chamber member BookingSamoa, a booking platform that supports micro and small tourism operators with scaling online bookings.

The total value of these B.P.P. partnerships is A$2.7 million, nearly three-quarters of which is derived from private sector investment.

The Human Rights Protection Party (H.R.P.P.) has taken their election campaign out to the villages, a day after a party leader flatly denied going out to "interfere" with the voters of the seven constituencies that will go for by-elections next month.

The Opposition leader has accused the Government of using taxpayers' money for political campaigns and made particular reference to $200,000 earmarked in its 2021-2022 Budget for each constituency.