The Congresswoman says Fiame is a “source of pride for all of Samoa” who adds to her family’s distinguished history of service to the people of Samoa by becoming the nation's first female Prime Minister.

She conveyed her congratulatory message in an official statement dated Tuesday, 27 July, 2021 sent from Washington D.C. which was published on her website.

Rep. Aumua’s wishes followed a statement issued by the Spokesperson for the U.S. Department of State Ned Price and the American Samoa Governor Lemanu Peleti Mauga.

“Congresswoman Uifa’atali Amata congratulated Prime Minister Fiame Naomi Mata’afa on her historic leadership role as the first female Prime Minister of the Independent State of Samoa, which has been publicly recognized by statements from the U.S. Department of State along with New Zealand and Australia,” the statement reads.

As a representative from the territory, the Congresswoman is one of the American lower house's non voting members but who are otherwise able serve several functions of democratic representatives such as introducing bills or serving on committees.

She notes that Fiame’s father – Fiame Mata'afa Faumuina Mulinuu II – was Samoa’s very first Prime Minister and the new P.M. leads the government from her office housed in a building that bears her father’s name. 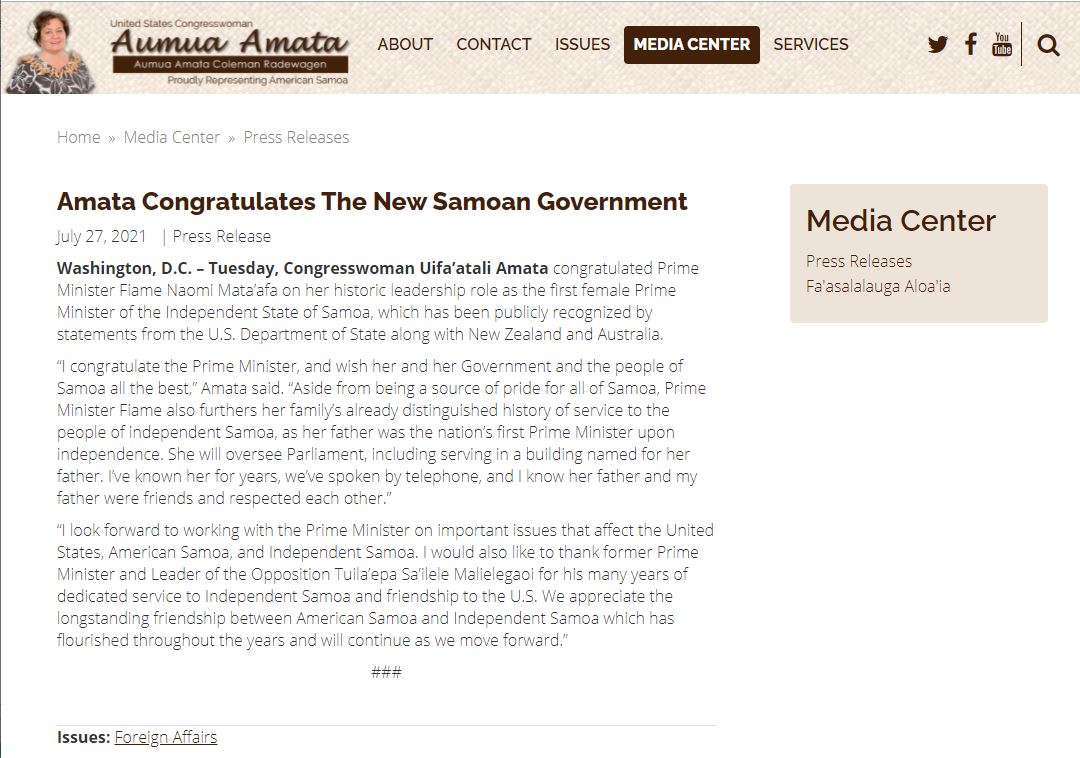 The Congresswoman said Samoa’s first P.M. was friends with her father, the late Governor Peter Tali Coleman. Governor Coleman was the first person of Samoan descent to be appointed Governor of American Samoa and served three terms as governor.

“I congratulate the Prime Minister, and wish her and her Government and the people of Samoa all the best. Aside from being a source of pride for all of Samoa, Prime Minister Fiame also furthers her family’s already distinguished history of service to the people of independent Samoa, as her father was the nation’s first Prime Minister upon independence,” the Congresswoman wrote.

“She will oversee Parliament, including serving in a building named for her father. I’ve known her for years, we’ve spoken by telephone, and I know her father and my father were friends and respected each other.”

The Congresswoman, the first woman to represent American Samoa in the U.S. House, said she looks forward to working with Prime Minister Fiame on important issues that affect the U.S., American Samoa and the Independent State of Samoa.

She also thanked the leader of the Human Rights Protection Party (H.R.P.P.) and former Prime Minister Tuilaepa Dr. Sailele Malielegaoi for “his many years of dedicated service” to Samoa and the friendship that flourished between Tuilaepa and the U.S.

“I look forward to working with the Prime Minister on important issues that affect the United States, American Samoa, and Independent Samoa,” said Rep. Aumua.

“I would also like to thank former Prime Minister and Leader of the Opposition Tuilaepa Sailele Malielegaoi for his many years of dedicated service to Independent Samoa and friendship to the U.S. We appreciate the longstanding friendship between American Samoa and Independent Samoa which has flourished throughout the years and will continue as we move forward.”