Voyagers celebrate the gift of the ‘Gaualofa’

The Samoa Voyaging Society celebrated the Gaualofa voyaging canoe’s ninth birthday with a ceremony and cake on Saturday at the Samoa Tourism Authority fale Samoa.

Tuatagaloa Joe Annandale, a founding member of the society, spoke at the ceremony. He was invited to share the history of the Gaualofa and the Samoa Voyaging Society.

The Gaualofa was gifted to Samoa by Okeanos Chief Executive Officer Dieter Paulmann and his wife in 2012 when Samoa celebrated its 50th anniversary of independence, Tuatagaloa said.

“This day marks nine years since the boat was gifted by Dieter Paulmann and his wife to Samoa,” he said.

In 2012 when several nations sailed to Samoa for the 50th anniversary of Independence Day, the Paulmanns gifted the boat to Samoa.

But the search for a voyaging boat for Samoa began years before, said Tuatagaloa, in 1987 when Samoa marked its 25th years of independence.

The Prime Minister at the time was Tupuola Efi with special guests travelling to Samoa for the Independence Day festivities and included the French Polynesia President Gaston Floss.

“I remember the day he [Tupuola] called me. Special guests from overseas were invited and President of French Polynesia Gaston Floss came through with two six-seater canoes,” Tuatagaloa said.

The canoes were given as gifts from French Polynesia to Samoa.

“Tupuola called and said there were two canoes, gifts for Samoa. I was asked to prepare the boats and canoe racing; it was not yet a competition sport at the time. That is when canoe racing got its start as a sport in Samoa,” Tuatagaloa said.

He teamed up with several voyaging enthusiasts including Foua Toloa of Tokelau. 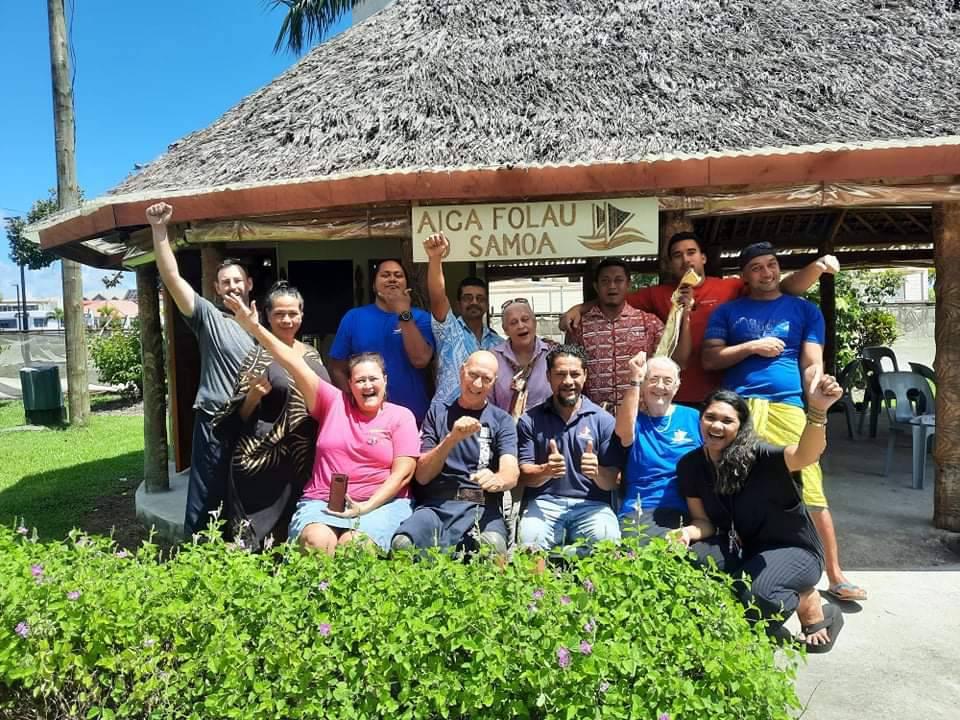 “We wanted to form an association and we wanted to build a vaatele,” said Tuatagaloa.

At the time, the Hokule’a, the voyaging canoe from Hawai’i had begun its traditional voyages between Hawai’i and Tahiti.

“That is where we started to think that we should build a voyaging canoe, Tuatagaloa recalled.

Then in 2008 the Festival of Pacific Arts was held in American Samoa and a number of participating nations like Tahiti and the Cook Islands sailed into Pago Pago Harbour onboard their voyaging canoes.

Mr. Paulmann decided then to build seven boats to revitalise traditional voyaging and spread the message of protecting the natural environment.

In 2009 construction of the Gaualofa began in Auckland, New Zealand. A crew from Samoa went to New Zealand to undergo training so they could sail the boat back to Samoa.

It was at the 50th Anniversary of Independence Day Ball that the Gaualofa was handed over to Samoa.

Gaualofa was designed and built by Okeanos Foundation.

It measures 75 feet and is a double masted traditional Polynesian sailing canoe, outfitted with a solar powered propulsion system, built in 2009 in New Zealand’s Salthouse Boatyard.

“He [Paulmann] decided to give the Gaualofa to Samoa. It is the first ship he has given as a gift...on the the night of the 50th Independence Day Ball at the E.F.K.S. Hall in Sogi…it was a gift for all of Samoa.”

The Gaualofa is currently dry-docked for maintenance.

Manu Samoa and A’ana Chiefs fullback Johnny Va’ili was placed on bail by the District Court after his partner requested that domestic violence charges be withdrawn.