Samoa in most challenging time: Tuilaepa

Samoa
On the eve of Samoa celebrating its 59th independence anniversary, caretaker Prime Minister, Tuilaepa Dr. Sailele Malielegaoi says that the nation faces one of the most difficult times in its history. (Photo: Aufa'i Areta Areta)

On the eve of Samoa's 59th independence anniversary, the nation's caretaker Prime Minister says Samoa is amidst one of its most challenging times, in an address focused mostly on politics.

The meeting followed a peaceful march by more than 500 women dressed in white to show their support for the addition of a sixth woman to Parliament. (The issue is currently the subject of a case before the Court of Appeal).

More than a thousand supporters of H.R.P.P. subsequently gathered for the meeting which included men, youths, children either dressed in white or blue. 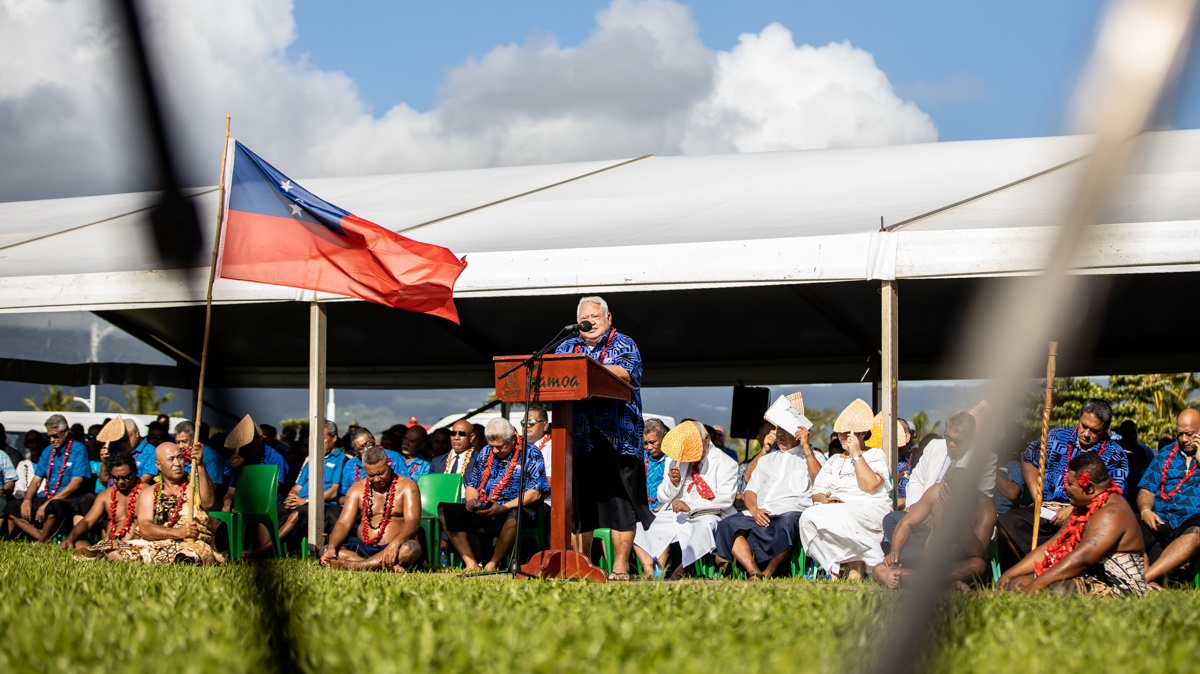 Tuilaepa said that Samoa has stared down several challenges before.

“I am confident that we will resolve this one soon,” he said.

He also said that he was positive because, “we believe that Samoa is founded on God, its culture and traditions.” 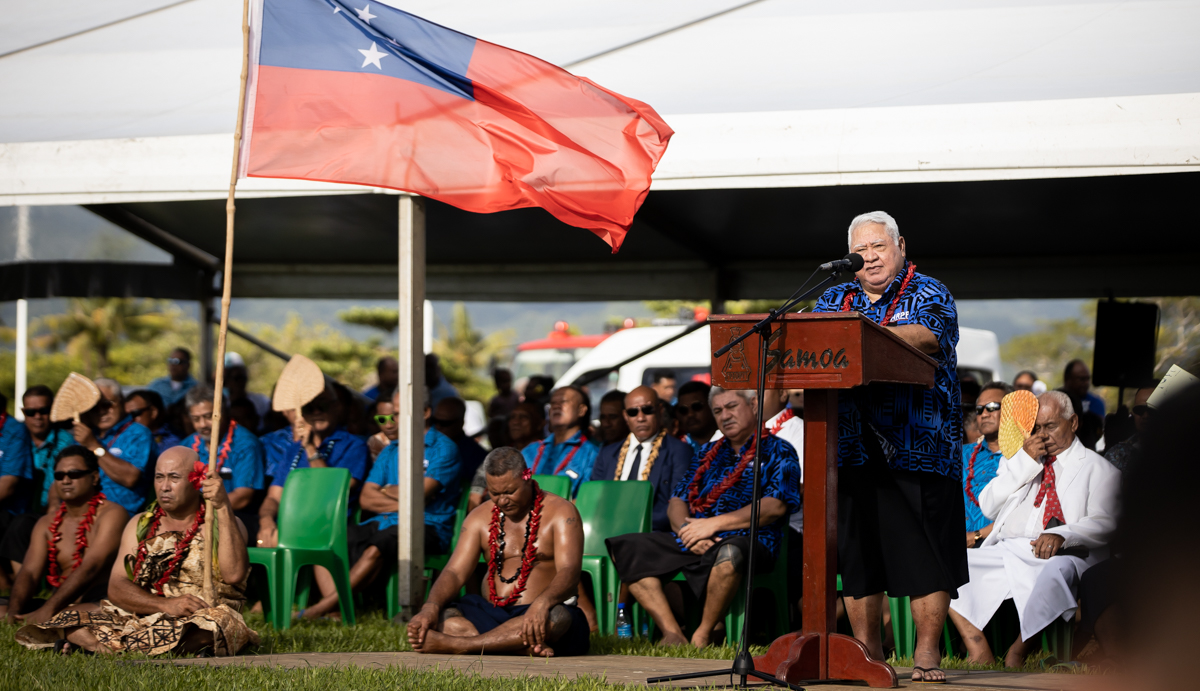 “On the eve of Samoa celebrating its 59th independence we faced one of the most difficult times in our history," he said.

“Our entire nation is praying for a peaceful resolution; churches, families are praying.

“I am also confident that our culture is resilient; we are humbled that international community respects and is concerned about Samoa.” 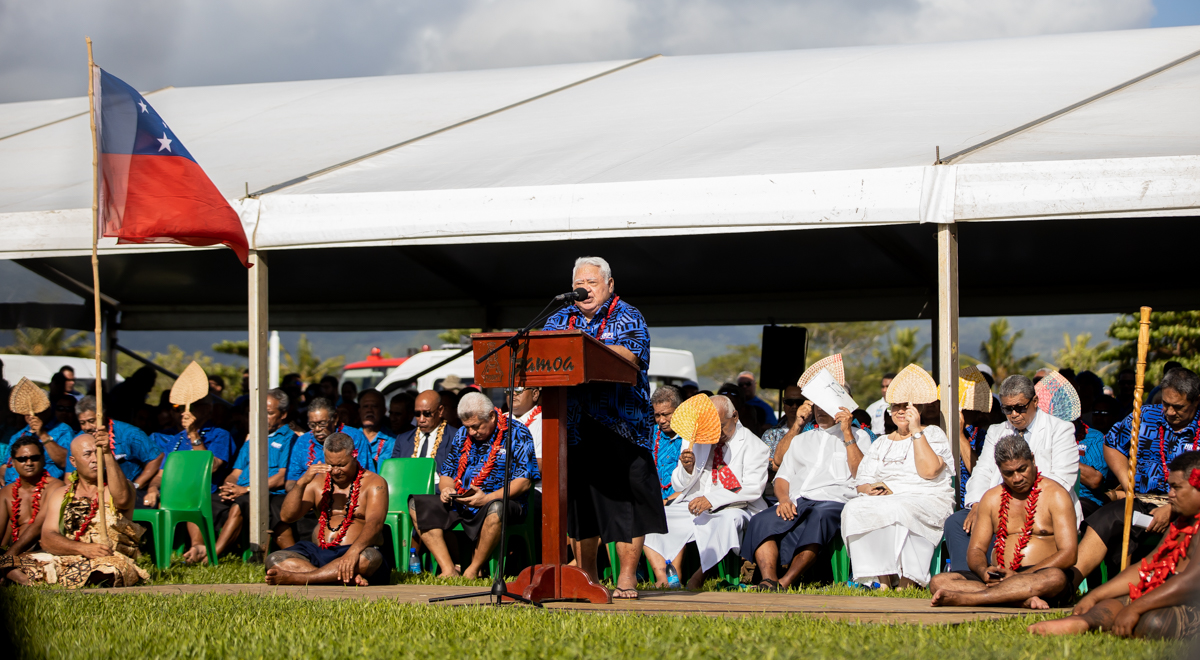 The caretaker Prime Minister said he could give assurance that stability, peace and safety were his chief concern, and with the help of God Samoa will resolve and overcome any threats to them.

“As leader of H.R.P.P. and caretaker Prime Minister of Samoa, I wish to elaborate on certain constitutional issues impacting our country and Government today," he said.

“But before I do so, let me first congratulate the elders of the council of Christian Churches in Samoa who led us in prayer and sharing with us the spiritual message of peace and forgiveness.

“I would stress that the purpose of this special session is to report to you all members of the H.R.P.P. the political challenges faced in our Government and country today.”

The H.R.P.P. leader said the traditional consensus process was the most appropriate way to move forward from crisis as it allowed Samoan cultural and religious traditions to bring harmony and peace to challenges' resolutions.

“In our small country of only 200,000 people we are all connected through our extended family system in a way therefore we are indeed one big family," he said.

“On April 9, 2021 Samoa held its general elections, the results was 25 seats for H.R.P.P. and 25 seats for the newly formed F.A.S.T. party [Fa'atuatua i le Atua Samoa ua Tasi] and one independent seat.

“We won the popular votes [...] but H.R.P.P. had too many candidates for its constituencies which splits the votes to our disadvantage.”

He said that after the results were confirmed H.R.P.P. gained another seat through the addition of a female member in a warrant of election issued after the fact by the Office of the Electoral Commissioner invoking a constitutional mandate requiring a minimum of female representation. That appointment is highly contested. It was struck down by the Supreme Court and is currently before the Court of Appeal.

“In defiance of the suspension of the Head of State’s proclamation, the F.A.S.T. party met anyway on May 24 and continued on to swear themselves in as the new government even though there were no constitutionally appointed office bearers present including the Head of State.”

Tuilaepa said H.R.P.P. condemns what he called as "dangerous" attempts by the F.A.S.T. party to seize power.

“It is our priority to see that the next Government is lawfully formed pursuant to the Constitution of Samoa and it is crucial that the rule of law is respected and followed," he said.

“Consequently, the Court’s decision will clarify and determine the number of members of Parliament there should be.

“H.R.P.P. sees this as a constitutional pre-requisite to convening Parliament. Much has been said about the rule of law."

He added that there was much misrepresentation of facts by social media and said that the caretaker Government upholds the rule of law and acts according to the best legal advice.