Between 200 and 500 farmers will be sending taro abroad through Wilex. (Photo: Aufa'i Areta Areta)

Wilex, the exporters sending Samoa’s koko and noni around the world, have this week begun sending fresh taro to the United States of America and hope it will revive national exports.

A 40-foot refrigerated container is leaving Samoa’s shores in the first of what Wilex hopes will be many shipments, with not only fresh taro but locally produced chocolate and noni juice products.

The Ministry of Agriculture and Fisheries quarantine division inspected the taro cleaning site last week and gave the site and shipment the all-clear to go. 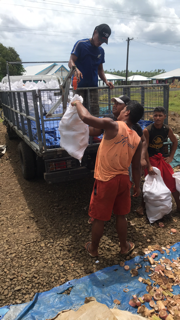 As an exporter himself, and the President of the Samoa Association of Manufacturers and Exporters, Tagaloa is passionate about reducing Samoa’s trade deficit.

In October 2020 Samoa was still importing significantly more than it exported, with a trade deficit of $81.9 million.

The Samoa Bureau of Statistics reports the large difference between exports ($8.6 million) and imports ($90.4 million) was largely driven by a reliance on bringing fuel, pharmaceutical products, meat and wood into the country.

Samoa’s exports have been growing this year though, with a 22.4 per cent increase between September and October, driven by more exports of fish, beverages, tobacco and fresh produce – specifically koko beans and taro heading to American Samoa and Australia.

The Government has pinned its COVID-19 economic recovery hopes on the agriculture sector, hoping that farming and exporting will boost the nation’s ailing economy.

Wilex is looking to eventually include between 200 and 500 taro farmers in its export drive, starting with the large pool of farmers that already sell noni fruit to the exporter.

“Taro exports for Samoa is worth about $10 million per annum now, and is Samoa’s second largest domestic export,” he said.

“The expansion into fresh taro export is a natural progression to include a good mixture of Koko Samoa, chocolates, noni, Kava products, combined with fresh taro.”

Annual trade figures from the Samoa Bureau of Statistics show the trade deficit keeping pace with rising import spends alongside much slower exporting.

Tagaloa is determined to triple Samoa’s export output by 2025 to reach $300 million a year.