Video by Vaitogi A. Matafeo

The Society presented their views on Wednesday, when they met for the second time with the Special Parliamentary Committee tasked with public consultations on the bills, three months after their initial meeting.

The Society's President, Leaiataualesa Komisi Koria, said they reiterated their stance on five main points they felt were extremely dangerous for Samoa if the Judicature Bill 2020, Lands and Titles Bill 2020 and the Constitutional Amendment Bill 2020, are passed.

The Society wants the bills to be withdrawn.

The issues they highlighted included the removal of the ability of people who go before the Lands and Titles Court to enforce fundamental human rights as protected under the Constitution.

The Society also expressed concerns about the removal of the Lands and Titles Court from the supervisory jurisdiction of the Supreme Court.

Leaitaualesa added that thirdly, concerns were raised about the new Lands and Titles Court's ability to define customs and usage.

"In other words, the Government will have a say in defining what is our culture," he said.

The fourth concern is the effects of the bills on the independence of the judiciary.

"The removal of the pretensions that currently exist for the tenure of judges in the Supreme Court."

Lastly, is the effects the three bills can have on the separation of powers as protected under the Constitution.

"The main concerns by the Law Society is that the democratic principles that are protected under the Constitution will be affected and diluted as a result of the clear passage of these three bills," Leiataualesa said.

The Society's final appearance before the Committee represented the end of their work in presenting and voicing their concerns, Leiataualesa said.

Former Attorney General, Taulapapa Brenda Heather-Latu, who chaired the Law Society's Special Committee to review the bills, reiterated that as a Society, they are extremely concerned about the ramifications of the bills for Samoa and Samoans.

"This has never happened before, in the Law Society, in its 44-year history; it has never taken the role or the steps in relation to these three bills, and its because it's worried," Taulapapa said.

"Because these bills undermine the fundamental fabric of justice in this country. And they also steal away the authority and the discretion of all of us as Samoans to decide what is aganu'u (culture).

"Because these bills, take away that power from Alii and Faipule and villages from each one of us and give it to the new Lands and Titles Court. Because in the Constitutional amendments it says they are the supreme authority on custom and usage. And that takes away the authority from people who live and breathe custom authority every single day." 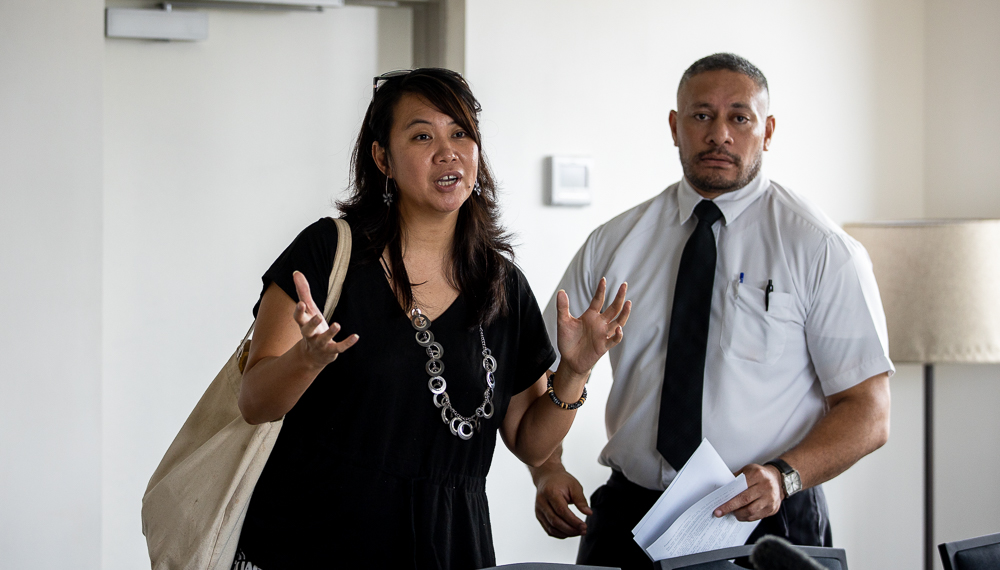 The Society expressed their views before the Committee chaired by veteran Member of Parliament, Gatoloaifaana Amataga Alesana-Gidlow.

Taulapapa stressed that rather than strengthening customs in the country, the three bills further weakens it by giving the authoritative power to the proposed autonomous Lands and Titles Court.

Taulapapa, however, acknowledge the opportunity for them to express their views, despite the "personal attacks" they have had to wear since they stepped out in public.

"Freedom of speech and expression is simply an example of all the other rights we hold sacred in our Constitution, that everyone should enjoy. But under these bills, they've taken away from people who have a lands and titles matter and that's not good enough," she said.

"The change in the Courts is a fundamental change and it's come in out of nowhere."

Taulapapa said the Society is simply asking the Government to follow its own procedure in introducing bills which are later passed into laws. The steps all the other bills had to take, except these three bills, which have already passed second reading in Parliament.

"Why? Why is that, except these ones?" she asked. "There's a reason for those policies, and it's so that you get the views of everybody about something before you start drafting a law."

She added that should these Constitutional amendments be passed, it will be hard to change again without the two-thirds majority of the vote in Parliament.

"If in the next election there are some people not from the main party, and that two-thirds is not reached this time around, then it will be very difficult to change these provisions and that's the other reason why we are saying, leave it," said Taulapapa.

"Withdraw them, take them off the order paper, start a policy discussion you've already started with villages and ask them what they want, ask them want's wrong with the Lands and Titles court, and make it better. But don't change the Constitution, don't change the justice system."