One quarter of Samoans' nutrition substandard

Dietary habits in Samoa have been questioned. (Photo: Vaitogi A. Matafeo)
Health

New analysis of local income and spending data has the Food and Agriculture Organisation worried Samoa’s food insecurity and health is worsening.

Data collected on eating habits and spending practices in the 2018 Household Income and Expenditure Survey and analysed by the F.A.O. reveals Samoans are eating well above minimum required energy levels, leading to high rates of obesity and other non-communicable diseases.

But they are not necessarily eating the right foods, with most households having poor access to vitamins and minerals.

Researchers, including the Samoa Bureau of Statisticss Edith Faaola, found a quarter of those surveyed cannot access nutritious food, and one in 20 are undernourished.

Dr. Walter Vermeulen, who is the Executive Director of Matuaileoo Environment Trust Incorporated, said Samoa has known about its poor dietary habits for decades.

Imported chicken and other fatty meats, and high quantities of vegetable oils for cooking are among the top two ingredients undoing Samoa’s once healthy population.

“It is just incredible what we are eating,” Dr Vermeulen said.  “It really comes down to animal products which are the baddies and which we have got to stay away from.

“We are consuming so much vegetable oil and it is absolutely not necessary. You can do your cooking without a single drop of oil.”

The F.A.O.’s analysis revealed just 13 food products make up 80 per cent of how Samoans get their energy, and more than half of them are just chicken, rice, taro and coconut.

The situation is even more limited in Savaii, where just 10 products make up 80 per cent of energy consumption, and half of all calories come from coconut, taro, pastries and rice.

A third of all households on Savaii are food insecure, the F.A.O. concludes.

Dr. Vermeulen said his organisation has been helping people reverse the impacts of their non-communicable diseases by radically changing their eating habits.

“That is why we have our healthy living clinic that promotes wholefoods, meaning not from cans or processed foods, and plant based, no animals. We say anything with a face or a mother, stay away from it,” he said.

“Just this week we had two ladies that reversed their diabetes by following whole food plant based nutrition.”

Last week, Vice-Chancellor of the Oceania University of Medicine, Manufalealili Dr. Viali Lameko called for advertising bans, taxes and trade regulations to stem the obesity crisis instead of depending on individuals to change their behaviour.

“If you watch the TV, every ten minutes there is an interruption of the programme for the ads and what do you find, but ads for meat products, junk food, alcoholic beverages, anything you can say is bad for your health. It’s terrible,” he said.

“We don’t have to reinvent the wheel, for heaven’s sake. Just look at the pictures of the Mau, look at all these people standing there, they are all skinny, not one single person was fat.”

Returning to a traditional Samoan diet of no meat for the entire week except for Sundays, is healthier but also cheaper, Dr. Vermeulen said.

“A fusi luau (bundle of young taro leaves) in the market is one tala and that could feed a whole family with a tin of baked beans and taro,” he said.

“You don’t have to buy imported broccoli and cauliflower, the local products are cheap. A bag of eggplants cost six or seven tala and would feed a family for a few days.

“What we tell our people is that if you follow a plant based diet it is much cheaper than continuing this crazy animal based food we are eating.”

He agreed that duty concessions could also change buying habits, like making brown rice much cheaper than white rice.

“It’s got to be worked out between the regulators and people that know about healthy food.” 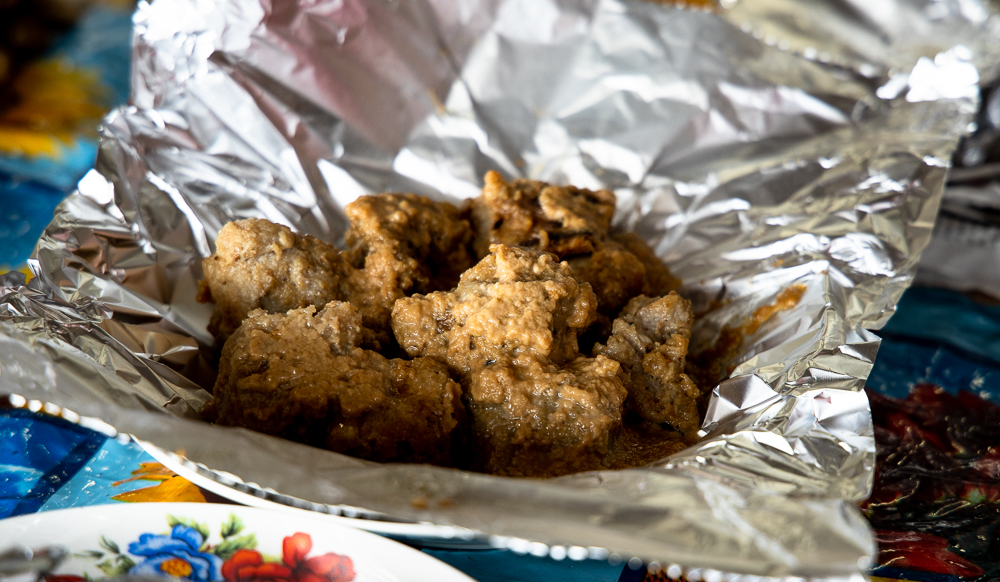 The 2018 data revealed the average Samoan spends 45 per cent of their total spending on food, which words out to $5.40 a day. They are spending 90 per cent of that on sweets, sugar, cereals and store-bought meat and fish, the survey shows.

Just three quarters of the average caloric intake comes from someone’s own plantation.

“Cereals such as rice or flour, or foods such as oils and sugar are very cheap sources of dietary energy, as it costs less than $1 to get 1,000 [calories] from these products,” the researchers state.

“To get the same amount of dietary energy from fish, milk or other dairy products would cost more than $5.”

The researchers analysed the nutritional makeup of the average Samoan’s diet, and found more than 30 per cent of energy consumed comes from fats, which is well above international recommendations of around 15 per cent.

The World Health Organisation recommends that on average, proteins contribute to 10 to 15 percent of the total dietary energy consumed, fats contribute 15 to 30 percent and carbohydrates contribute 55 to 75 percent.

In Samoa, however, proteins make up more like 11 per cent, fats 34 per cent and carbohydrates 55 per cent.

When it comes to vitamins, the researchers identified the biggest issue is in Vitamin A consumption, needed to support cell growth, immunity and foetal development. Vitamin A deficiency is the leading cause of preventable blindness worldwide and may have contributed to the high rates of death in the measles epidemic in 2019.

The researchers found Samoa has “huge disparities” in the population of who is consuming the right amounts of Vitamin A, with around half as much being consumed in poor households compared to rich ones.

Calcium consumption was also found to be below the average requirements.

Samoans consume around half of the average requirement of calcium, with all population groups, “without exception” showing inadequate levels.

This is partly down to what households have available.

Taro and other root crops contain some calcium and because they are eaten in high quantities do make up around a quarter of the average Samoan’s calcium intake. But they are very low in calcium compared to milk.

The poorer households are getting just 37 per cent of their required calcium levels, while the richer households get 86 per cent.