The skyline official receipt and the handwritten receipt allegedly given to one of the stores in Aleipata-Itu-i-Lalo County. (Photo: Aufai Areta Areta )

The probe into Skyline follows allegations the company had been issuing retailers with handwritten and non-standard paper receipts, raising questions about irregular financial record keeping on the part of the company.

A businesswoman, who runs a shop at Aleipata Itupa-i-lalo, offered two receipts to the Samoa Observer.

“There are two receipts here,” she said. “The handwritten one is my receipt because this is what I paid and the official receipt which they say I can give to the Revenue Office if they come to my store.”

At Siumu, the owner of Fa’alogo Iosefo’s store, Ala Tupuola, told the Samoa Observer that Skyline offers the “handwritten on non-standard paper receipts” only when she inquires. 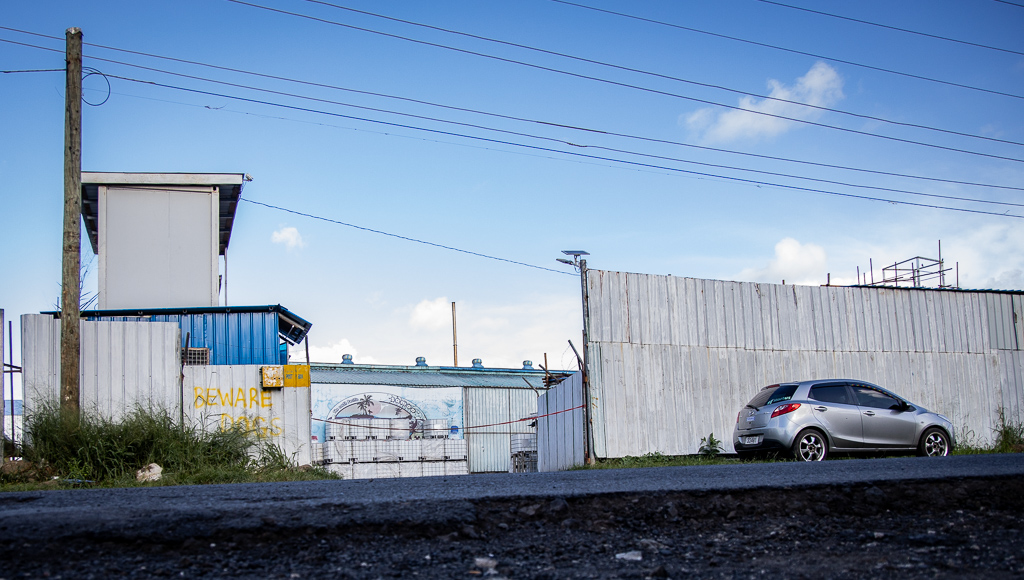 “They don’t usually give us receipts but the only time they would give me receipts is when I demand it,” she said.

Ms. Tupuola added that she filed a complaint with the Ministry of Customs and Revenue last week after she read the article on the Samoa Observer.

“After going through the article, I felt behooved to file my complaint directly with the Revenue office,” she said.

“Now I am waiting for them to contact me if they need additional information.”

At Vaovai Falealil, the Owner of Vaoiva Store, Fofoga Fofoga, told the Samoa Observer that sometimes they would get receipts and sometimes there are no receipts.

“This has been ongoing for over a year,” Ms. Fofoga said during an interview.

She said there are many reasons why it’s important to have a receipt.

“For over a year, either they offer us hand written receipts on pieces of paper, or there are no receipts at all,” she said.

“And they would make up all these excuses (on why there are no receipts).

“And so last week [after the Samoa Observer article] I filed a complaint with the Revenue Office over this matter.”

Ms. Fofoga’s official complaint, obtained by the Samoa Observer, was addressed to the Commissioner of M.C.R., Matafeo Avalisa Viali-Fautuaali’i. 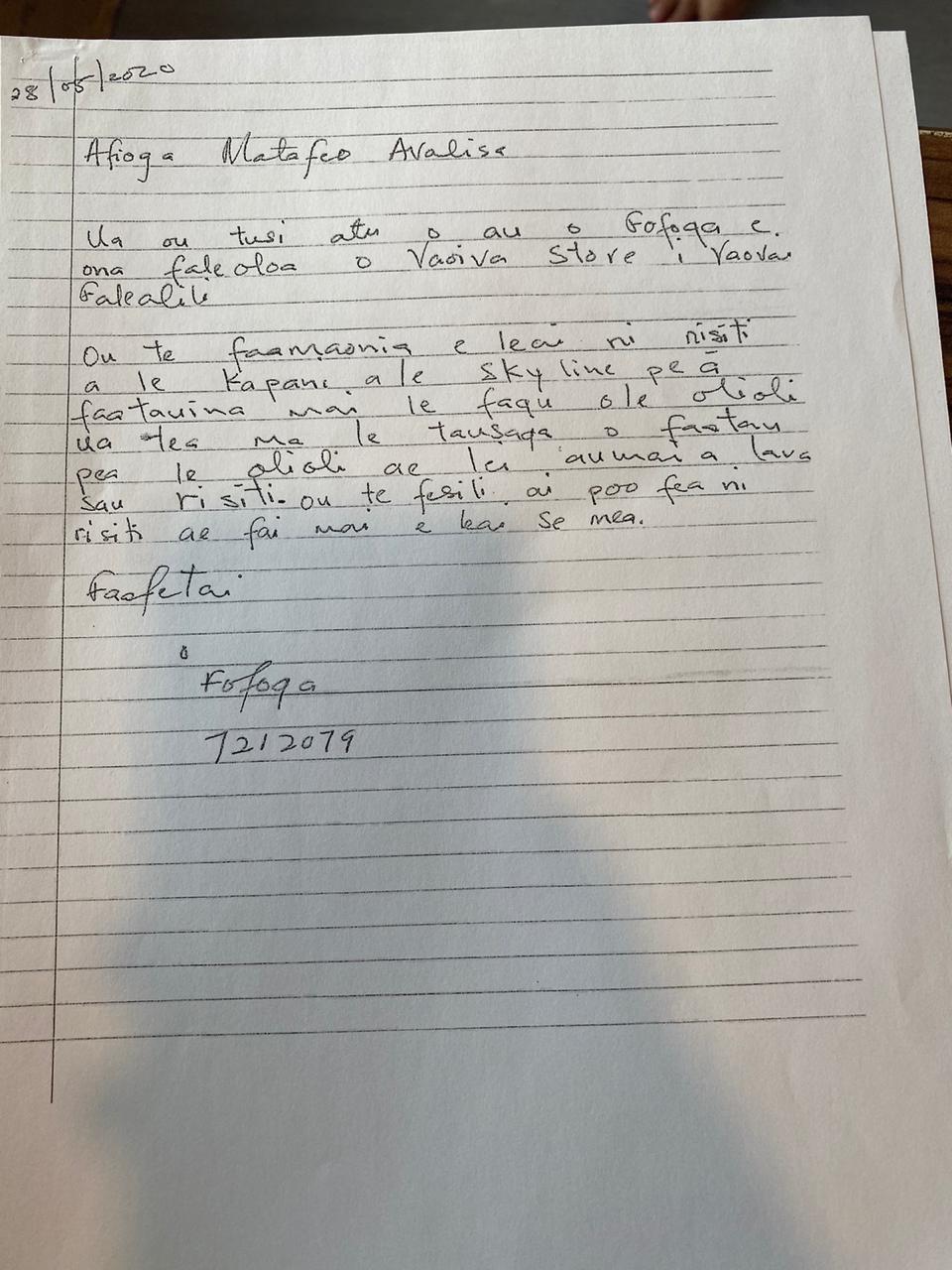 Dated 28 May 2020, Ms. Fofoga expressed concerns over the “lack of proper official receipts from the Skyline Company.”

Another store owner in Falealili, who did not wish to be named, confirmed that they too have been struggling with the issue.

“The transactions are conducted using plain paper and our store can vouch for that,” he said. “Sometimes they said there are no receipt and most of the times, the receipts are written on pieces of papers and I don’t see the logic in that.”

Last month, the Minister of Revenue, Tialavea Tionisio Hunt, confirmed the investigation against Skyline, which not only sells alcohol but also is a major exporter.

Tialavea said that the receipts raise the possibility that the supplier of the popular “coke wine” known as “Olioli” and “Boom Vodka” had been evading excises.

The receipts indicate that the company was handwriting receipts on single leaf pieces of paper, such as one showing a shop was charged $72 for one case of 24x 500-millimetre bottles of “olioli”. According to the Minister, under the relevant taxation Act ,$72 tala is the amount of V.A.G.S.T. that must be paid for a case of 24x 500 millilitre bottles.

Local stores are selling the case of olioli for $96, netting them a profit of $24 tala but, the Minister said, raising questions about how Skyline was able to generate income from making sales at such prices.

“[There is an] in-depth investigation into the prices on the written receipts as it appears the company [may allegedly] only [be] charging their consumers the cost of the V.A.G.S.T. (Value Added Goods and Services Tax),” the Minister said.

“This law was passed in 2018 and included in the same Act was the ban on bottles of liquor under 500 ml to be sold in stores.

“There is something shady going on here, and we will get to the bottom of this.”

The Samoa Observer contacted “Eric”, the Liaison Officer for Skyline on Wednesday for a comment.

“I will call you back as I am busy right now,” he said on the phone.

He did not return the phone call by press time.

Emails sent to the Commissioner of M.C.R., Matafeo Avalisa Viali-Fautuaali’i, to follow up on the state of the investigation were not responded to.

Last month, she said: “The tax laws certainly do not allow such pieces of paper as official receipts. For your information, our Customs team is now checking these out.” 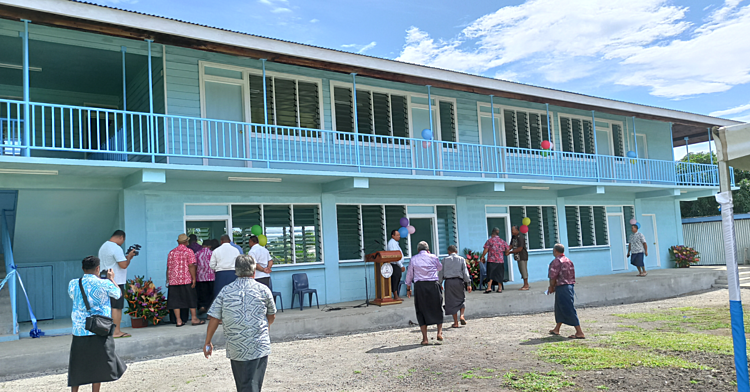