FACETIME: Thanks to technology, Mr. Olomautu and his wife Tamara can stay in touch with their 21-year-old son who is stranded on a cruise ship in the Bahamas. (Photo: Sialai Sarafina Sanerivi )
Savaii

A father from the village of Saipipi Savai'i has pleaded with the Government of Samoa to "take action" and bring his son and other Samoan sailors home.

Netane Olomautu fought to hold back tears when he talked about his son, Sese Junior Sikoti Piula, who is among a group of 16 Samoan sailors on a cruise ship in the Bahamas, the MSC Preziosa.

Mr. Olomautu told the Samoa Observer that the period of isolation his son and colleagues have had to endure has also been stressful for him and his wife, Tamara.

"As a parent, you can't help but worry," Mr. Olomautu said.

"It's not easy for a parent to be away from their children and not knowing when you will see them again and if they are well taken care of.

"My son is stranded on a crew ship. In my opinion, they are not safe."

He went on to say that their 21-year-old son was expected to return home in August after the conclusion of his nine-month contract.

"They have stopped working for like two months now (and) they are not doing anything at the moment,” he said.

"They just say in [their cabin] rooms and have nothing to do."

The concerned father said his request is very simple.

"My humble request to the Prime Minister and the Government of Samoa is to please take action. Please bring our son's home safe and sound."

"We don't want to blame anyone or start pointing fingers, but where do we go for help in times like this?,” he asked.

"Who is to blame if something (bad) happens to our children? When are they going to take action? Until we lose someone or until something bad happens? What if it was one of their sons or daughter? Would they act early and do something?

"We just want to humbly put a request to the government to please take action and do something to bring our son's home. They too want to come home.

"If things get worse, we don't know what might happen to our children and my son," the emotional father said.

"I wish there was a way I could bring my son back home, and if it was possible to row a canoe or go on a boat to get him, I would do it without hesitation.

"We can't help but worry about them being stranded on the ocean. Even when people approach me and tell me not to worry, I know deep down in my heart that our hearts and minds are always with our son... I just want him back home safely.

"Even if they bring them home so they can quarantine for 14 days either in New Zealand or Samoa, but at least we know they are close by and that they are far from greatly affected areas."

A total of 320 Samoan sailors were on cruise or commercial vessels worldwide as at April this year, according to Government figures.

But thanks to technology and reliable internet service, Mr. Olomautu is able to communicate with his son every day.

"I thank God for technology because it makes it easier for us to keep in contact with our loved ones. We cannot do anything, all we can do is to continue to pray to God to watch over them,” he said.

"Even if we don't get money anymore, at least we know he is safe and that he is alright.

"They no longer work anymore, and all they want is to come home to their families and friends.

"Every time we talk to our son, we always try to be brave and encourage him to remain strong. But after that, we can't help but break down because the only thing we want is for him to come back safe in our hands.

"Even though my son says he's okay every time we talk, I know and I can tell from his face, that he just wants to come home.

"My son said the sailors from other countries have returned back to their homelands but my son and [...other sailors] are still stranded on the sea. Something has to be done and we are asking the government to please consider our plea."

However, they are really homesick and just want to come home to his parents.

"It's been two months since we've been isolated on the cruise ship. We do not work anymore, so it gets really lonely as we don't have anything to do,” he said.

"We miss our families and especially parents. During difficult times like this, all we want is to be surrounded by our loved ones and enjoy each other's company.

"However, there is nothing we can do."

However, the young sailor said he finds solace in the thought that there are better days ahead for them.

"I trust the Lord who brought us here," the sailor said.

"This is only temporary and although we get sad and lonely at times, we just know that it will be over soon.

"We just want to come home; we do not know when only God knows that. But please continue to pray for us and for better days for everyone."

A petrol station at Malifa, set alight in March as a result of a tragic domestic violence incident that killed two people, is being rebuilt. 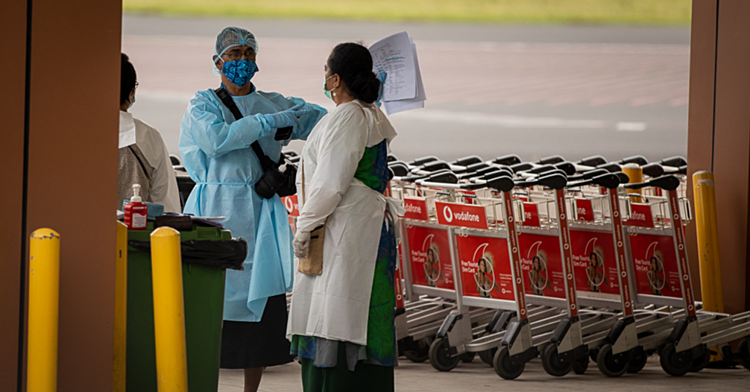 Reports that ANZ Country Manager Bernie Poort had broken quarantine to buy groceries on the weekend were false according to Police Commissioner Fuiavailiili Egon Keil.