Battle against N.C.D.s rages on behind the measles epidemic

In the background of the measles epidemic, another public health battle rages on: the fight against non-communicable diseases that currently has over 120 people on lifesaving dialysis treatment in Moto’otua.

It is a fight that will not be ignored, Leituala Dr Ben Matalavea, Clinical Director of National Kidney Foundation said.

Non-communicable diseases (N.C.D.s) like diabetes, hypertension and kidney disease are among the leading causes of sickness and death in Samoa. Over 70 per cent of Samoans are afflicted, and another 50 per cent are at high risk of developing an N.C.D.

N.C.D’s are also the leading driver of overseas medical treatment, accounting for 10 to 15 per cent of the total health budget in 2016.

“We have to carry on with that huge task so we can prevent people from going on dialysis which as you know is a very costly thing.”

He said luckily most patients on dialysis, including three 18 year-olds, are able to be vaccinated against measles, protecting them from a major threat to their already weakened immune systems.

The vaccine is safe for dialysis patients but not for kidney transplant patients, Leituala explained.

To anyone unsure of their health status, the doctor urges them not to wait until the measles epidemic is over, despite the massive burdern on the health system.

The private practice system is able to diagnose and prescribe treatment to most N.C.D’s, he said.

“We are under stress with the measles, but these N.C.D.s are preventable.

“I think people ought to take responsibility that their medications don’t run out; medications that are provided by the government pharmacy for free. I think there is no excuse for people running out of medications.

“It’s Christmas coming up, there will be lots of feasting and plenty of food and things. People ought to not neglect [their health]. The last thing we want is the hospital overloaded with non-communicable preventable disease.”

As well as the patients suffering N.C.D’s many people across Samoa require hospital services as usual. On the Western side of Upolu, Faleolo District Hospital has been repurposed as a 24/7 clinic for non-measles cases exclusively.

Leituala said it is an excellent centre, and is currently being staffed by the New Zealand Medical Assistance Team which has enabled the local staff to attend to other districts.

“It’s a really nice facility and I am happy it’s turned into a 24/7 hospital at this time. I hope we will retain that because of the huge number of patients from Falelatai, Lefaga, and Falease’ela.

“Over the last few weeks we admitted three tourists with severe dog bites and severe infections from dog bites so they are not impacting on the hospital here. We’ve been seeing skin infections, heart failure, the usual things we encounter.

“All those people need somewhere to go so I’m glad they have Faleolo.”

Unfortunately, some of the efforts of the National Kidney Foundation (N.K.F.) against N.C.D.s are on hold until the nation has the measles epidemic under control. That includes awareness and education campaigns as well as regular clinic visits to communities to test for high blood pressure and catch diseases early.

The N.K.F, based in an aging building by Tupua Tamasese Meaole Hospital in Moto’otua has been scheduled to relocate to the old Laboratory and Pharmacy building further up the road. That relocation too has been postponed.

Leituala said part of that delay was due to the approval and tender process, but now with Government attention firmly on the epidemic at hand, the organisation will have to wait at least a couple more months yet.

“We were hoping it would be end of this year but with so many other priorities we had to reprioritise and be patient.

“The measles has taken over as the priority, which I agree with.”

The facilities in the old Laboratory and Pharmacy are bigger and in a nicer building. The N.K.F currently has to contend with a building in a very sorry state that with the relocation around the corner is not worth renovating. 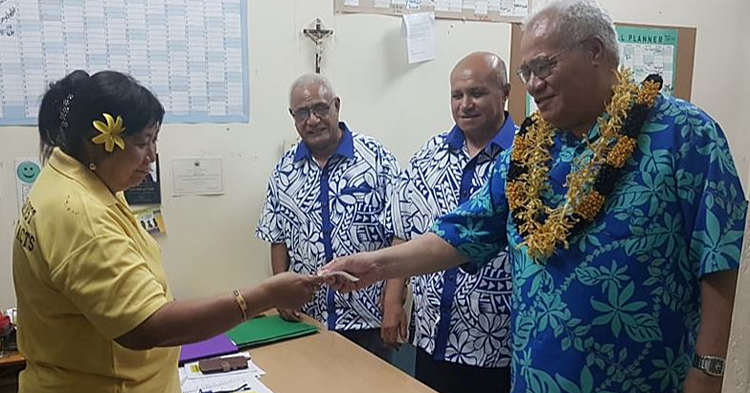 A total of 275 people were reported by the Ministry of Women Community and Social Development (M.W.C.S.D.) who have not been vaccinated up till January.