Complaint against Regulator lodged with Police

A Police complaint has been filed against the Regulator, Lefaoali’i Unutoa Auealua-Fonoti, where she is accused of repeatedly swearing at the General Manager of TV3, Aotearoa Pesamino.

The General Manager of TV3 had initially lodged an official complaint with the Public Service Commission (P.S.C.) against Lefaoali’i on 15 May 2019.

On Thursday this week, she made a sworn statement to the Police. Ms. Pesamino alleges that she received a phone call from Lefaoali’i about a delay in submitting a report due on 10 May 2019; a report she says was delayed because the Technician responsible for its preparation had a family emergency.

She then alleges the Regulator launched into a “diatribe” accusing her of undermining the national transition to a digital television network.

“She proceeded to use profanity and accuse our network of purposely delaying the process. Words like s--t, b------t and f--k were all used during her diatribe of accusations as me as well as our network,” Ms. Pesamino alleges in her initial complaint.

“I do understand that the O.O.T.R. is under a ton of stress but this is not to cause the use of profanity on any of the media network.

“I find it completely unprofessional from a C.E.O. of a government entity to bully, use profanity and then hang up on anyone,” the letter reads.

“We have been threatened by this office in the past in other ways.

“No company or person(s) should ever be attacked by any representative of a Ministry.”

An email sent to the Regulator for a comment had not been responded to at press time.

The Samoa Observer contacted the Chairman of the P.S.C., Aiono Mose Su'a, and the Minister for Communications and Information Technology, Afamasaga Rico Tupai, about the complaint.

No response was received from Aiono.

But the Minister said that because the letter was addressed to the Public Service Commission, they should be responsible for comment.

The digital television initiative, which would oblige stations to switch to a digital transmission system has been fraught with delays and industry opposition.

Some stations saying that cannot afford an already-reduced licensing fee of $23,400.

On Friday a last-minute intervention extended a deadline by which time stations had to sign up for the switch or face possible prosecution.

Ms. Pesamino concludes her first complaint by suggesting she may have to file a Police report as recourse to Lefaoali’i’s alleged behaviour.

Both complaints have been obtained by the Samoa Observer.

Ms. Pesamino was approached for comments on her letter of complaints, but she declined noting the matter is with the Police and she does not wish to comment.

"I decline as the matter is now with the Police; I have submitted all the evidence and I am now waiting to see what will happen to my complaint," she told this newspaper.

Ms. Pesamino this week proceeded to file a complaint with the Police on Thursday where she reiterated the alleged events of what occurred on the day in question and claims to have had a witness who heard the speakerphone call.

“I am making a complaint statement to the Police against Lefaoali’i for breaching the code of conduct for C.E.O. of Ministries and [using] profanity at me on the telephone,” the Police complaint reads.

“I remembered the time and date that she called to use these insulting words to me as mentioned above.”

Questions were also sent to the Acting Commissioner of Police, Papali’i Monalisa Keti on the criminal complaint filed by the Manager this week; they were not answered as of press time. 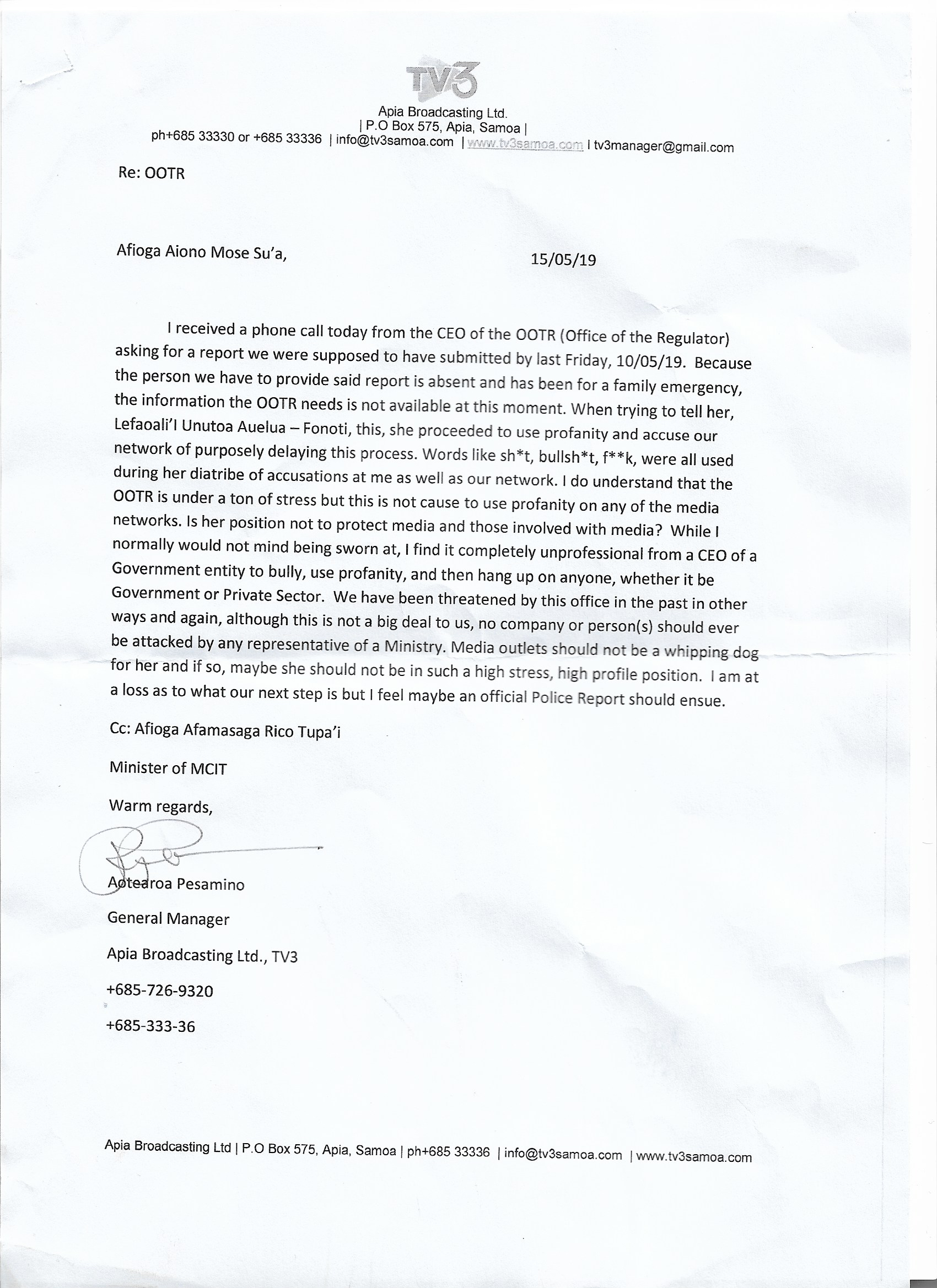 The villages of Tufulele and Utuali'i threw their support behind the Government's proposed changes to the Land and Titles Court (L.T.C.) and broader judiciary after meeting the Parliamentary Committee on Tuesday.

A repatriation flight to Samoa from Auckland is set to arrive this Friday, 7th of August with it possibly being the last for now due to the global pandemic.