We will remember them.

Before the break of dawn yesterday, the sacrifice of the fallen and returning ANZAC soldiers who served in the great world wars was remembered and honoured at the Apia Town Clock.

Government officials, members of the diplomatic corps and citizens of New Zealand and Australia gathered in the heart of Apia where the Royal Samoa Police Band led a march to the clock tower.

Wreaths were laid at the Apia town clock by the Head of State, His Highness Tuimaleali’ifano Vaaletoa Sualauvi II and Acting Samoa Prime Minister, Fiame Naomi Mata’afa, followed by members of the diplomatic corps and the public.

Following the dawn ceremony, dignitaries and guests congregated at the Returned Services Association Building (R.S.A.) where formal speeches were given by the President of the R.S.A, Tuala Joe Ponifasio, and New Zealand High Commissioner, David Nicholson.

“This morning we meet as the original New Zealand and Australian ANZACS did 100 years ago on ANZAC Day 1918 to honour the ANZAC landing at Gallipoli and to remember and acknowledge the service and sacrifice that has over the course of more than a century, come to define the ANZAC spirit,” Mr. Nicholson said.

“Despite the bravery, tenacity, practicality, ingenuity and ‘mateship’ displayed by New Zealand and Australian forces during WW1, the impact on our small, still emerging neighbouring nations was at best momentous, worst and catastrophic.”

The New Zealand High Commissioner highlighted the impact the casualties of war had on the Pacific including the influenza epidemic of 1918.

“This year marks 100 years since the devastating global influenza pandemic.

“The celebrations that followed the declaration of the Armistice in November 1918 finally bringing peace after three years of WWI conflict were subdued as New Zealand and the rest of the world succumbed to influenza.

“In Samoa, influenza claimed 8,500 lives, a staggering one fifth of the population.”

Fiame spoke about the importance of the occasion for Samoa. She said the values of ANZAC are universal values, which can sustain society.

“This year we are challenged by many elements human and natural. It is in that spirit that I would like to make these comments mostly in Samoan because it’s important for the Samoan community to hear those values that have been spoken about this morning.

“Some of you may not be aware that the first action to be undertaken in that theatre of the WW1 was the New Zealand expeditionary forces who came to Samoa and took over the administration of Samoa from the Germans and which essentially set the path for Samoa to become independent in 1962.”

Earlier, the National anthems of Samoa, New Zealand and Australia were played by the Royal Samoa Police Band before leading another march to the World War 2 Memorial joined by the Boy Scouts.

Breakfast was then served to the dignitaries and guests at the R.S.A followed by entertainment from the Royal Samoa Police Band. 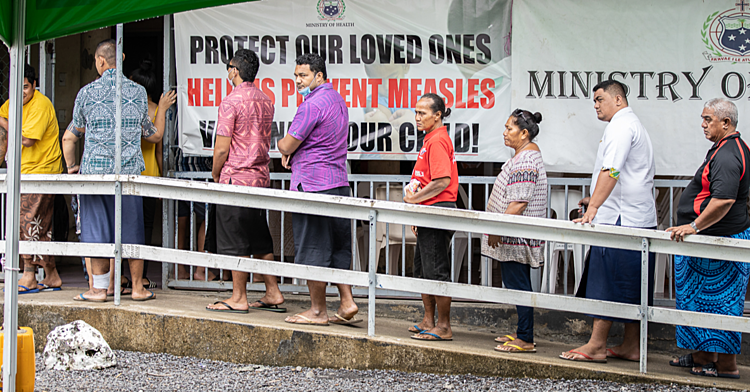