At stake is the potential for confrontation, if not outright conflict, between the U.S. and Russia, former Cold War foes whose relations have deteriorated in recent years over Moscow's intervention in Ukraine, its interference in the 2016 U.S. presidential election and, most recently, its support for Syrian President Bashar Assad.

Russian lawmakers have warned the United States that Moscow would view an airstrike on Syria as a war crime and that it could trigger a direct U.S-Russian military clash. Russia's ambassador to Lebanon said any missiles fired at Syria would be shot down and the launching sites targeted — a stark warning of a potential major confrontation.

Trump, who has often said a commander in chief should never telegraph his military intentions, apparently did so himself, tweeting that missiles "will be coming" in response to the suspected chemical attack that killed at least 40 people near Damascus.

"Russia vows to shoot down any and all missiles fired at Syria," Trump wrote. "Get ready Russia, because they will be coming, nice and new and 'smart!' You shouldn't be partners with a Gas Killing Animal who kills his people and enjoys it!"

Defense Secretary Mattis, however, indicated that evidence of what happened was still being studied. At a photo-taking session during a Pentagon meeting with his Dutch counterpart, Mattis was asked by a reporter whether he had seen enough evidence to blame the Syrian government.

"We're still assessing the intelligence, ourselves and our allies," Mattis said. "We're still working on this."

Trump suggested Monday he had little doubt that Syria was to blame, but neither he nor other administration officials have produced hard evidence. This is in contrast to an incident one year ago in which the U.S. government had video and other evidence of certain aspects of an actual attack by Syrian aircraft, which involved the use of sarin gas. Trump responded then by launching dozens of Navy cruise missiles at a Syrian airfield.

Asked whether the U.S. military was ready to conduct an attack in Syria if ordered, Mattis replied, "We stand ready to provide military options if they're appropriate, as the president determined."

Mattis was to meet with Trump later Wednesday.

In the past, Trump has condemned others for forecasting military plans, repeatedly blistering President Barack Obama during the 2016 campaign. During one speech, he said, "We must as a nation be more unpredictable. We are totally predictable. We tell everything."

Asked about Trump's tweet about an impending attack on Syria, former Defense Secretary William Cohen, who ran the Pentagon for President Bill Clinton, said on CNN that it "compromises the mission somewhat."

Trump did not detail what a strike on Syria would look like, or whether these would be U.S. missiles. U.S. officials have been consulting with France, Britain and other allies on a possible joint military operation, but the timing remained in doubt Wednesday. Trump canceled a foreign trip in order to manage a crisis that is testing his vow to stand up to Assad.

Shortly after his tweeted warning to Russia, Trump took a more conciliatory tone in lamenting that the U.S.-Russia relationship "is worse now than it has ever been." There is no reason for this, he wrote, adding that "Russia needs us to help with their economy, something that would be very easy to do, and we need all nations to work together."

Trump's administration has sought to show toughness on Russia, with a series of economic and diplomatic actions, including new sanctions last week against government officials and oligarchs. Trump has largely avoided criticizing Russian President Vladimir Putin by name, though he singled him out in a tweet over the weekend for supporting Assad.

The U.S., France and Britain have been in extensive consultations about launching a military strike as early as the end of this week, U.S. officials have said. A joint military operation, possibly with France rather than the U.S. in the lead, could send a message of international unity about enforcing the prohibitions on chemical weapons and counter Syria's political and military support from Russia and Iran.

French President Emmanuel Macron on Tuesday called for a "strong and joint response" to the attack in the Syrian town of Douma on Saturday. The Syrian government denies responsibility.

The French president does not need parliamentary permission to launch a military operation. France is already involved in the U.S.-led coalition created in 2014 to fight the Islamic State group in Syria and Iraq. Multiple IS terror attacks have targeted France, including one last month. 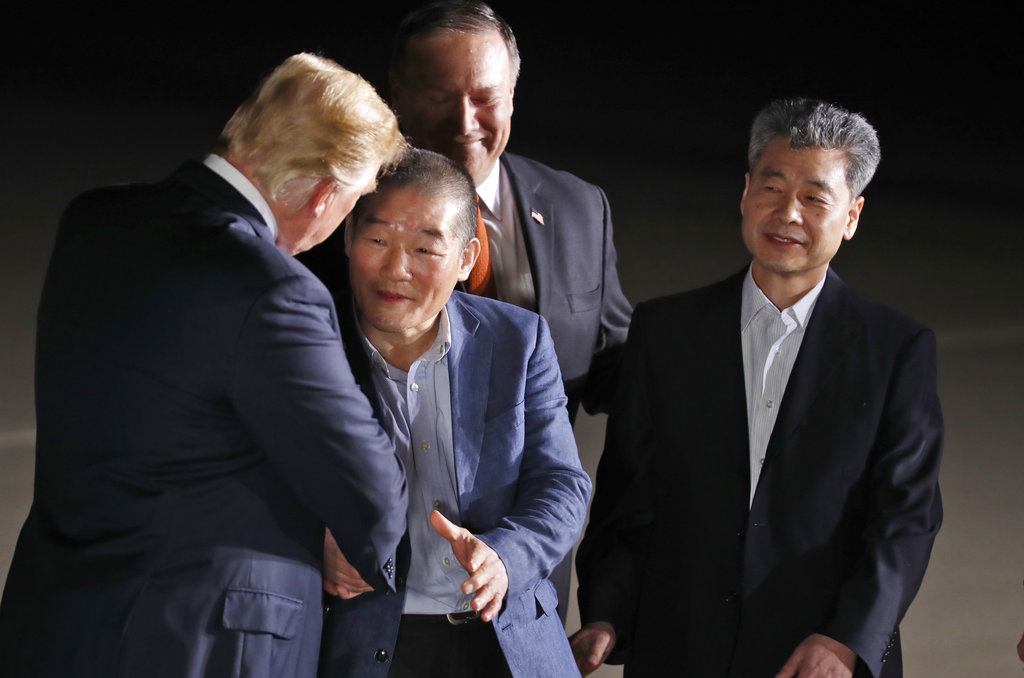