The first woman to have ever officiated men’s rugby matches in Samoa, Avii Faalupega Magele, is encouraging younger generations of Samoan referees to keep representing women on the football field.

Magele says that the career while challenging is rewarding.

"I want to share a message, not only to young women and girls that they can do anything just like men,” she said.

“What I'm trying to say is - I'm trying to get the message out there to all our young girls and women - not only them but also the young boys, on the match official side that they can do it.

“I know from my point of view since I've been involved in the officiating side that it is a challenging career for me, you'll face a lot of frustrations on the field, you [have] gotta work hard, I think the key message for our young generation is that you have to work hard and use the opportunity.”

Magele was selected to officiate the main game of the Samoa Invest Lakapi Championship on Friday night, between Apolima and Savaii.

She says she has been working around the clock to ensure that she can rise to the challenge of officiating mens’ matches.

"I am grateful for the opportunity, and [...] before the tournament started I worked really hard for it so that I can be in the men's most dominated sport especially as a referee,” she said.

“That is something that I am really grateful for and I'm really proud of myself that I worked really hard to get selected to officiate [Friday’s] game.

"The biggest challenge is it is the men's most dominated sport so people always look at me as a woman but I worked really hard to make sure that I'll perform my best [...] on the field [...] so that everyone would agree that anyone can do the job and get it done.”

During Friday’s game several frustrated players sought to challenge some of Magele’s calls without shaking her faith in her decision; she stood her ground and controlled players’ frustrations.

"Realistically, this is all part of the game,” she said.

“It's always part of the game, just because both teams and both players are all hungry for the ball and wanna get there, they want to win.

“So for me, as long as I'm there [and] make the right decision [I] make sure that I manage everyone so that was my biggest goal for this game.” 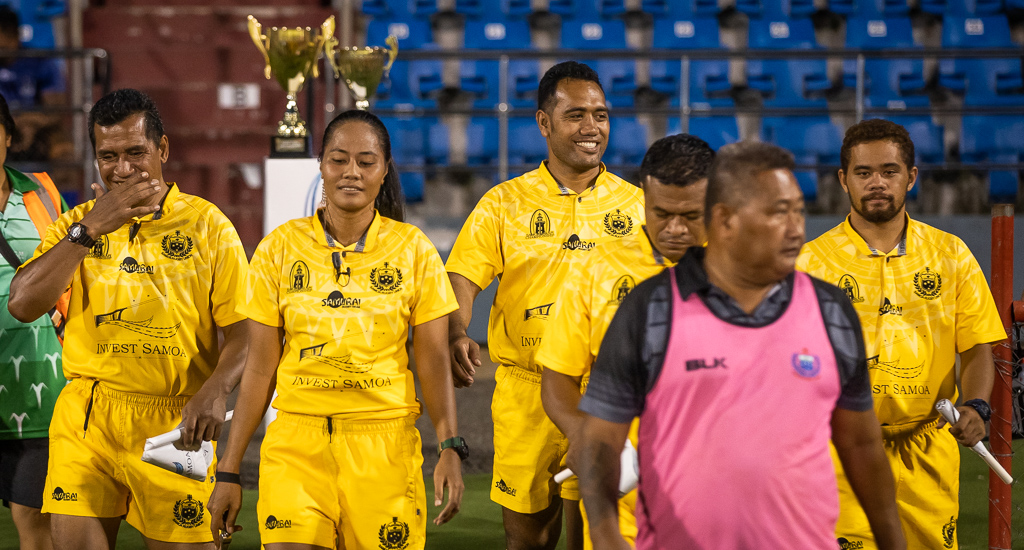 Magele reflected on the difference between controlling men’s and women’s matches.

For her, it is much easier to impose order on male contests.

"The difference between the men's and women's match is that men are more experienced [at playing] the game than the women but still the women are very hard to manage and control because most of the girls are inexperienced [at] rugby but the men, because of their experience [in playing] rugby, it causes them to challenge me on the field,” she said.

“But the difference from a referee's point of view, it's much easier for me to control the men than the women just because of that inexperience between men and women. But it is a massive challenge to be in the men's arena.”

Magele had been training and looking forward to being a match official for the men's contest ever since she heard the Samoa Invest Lakapi Championship was taking place.

"[I] work hard, train hard, and make sure I prepare myself physically, mentally, and spiritually,” she said.

“You gotta work hard, as long as you're working hard and controlling the game then you'll do good.

"I knew about this competition about a couple of months ago, that's when I started. We had several tournaments, the Vodafone Sevens and everyone was fighting for a spot to get selected to officiate a sevens match.

“I worked really hard for it and I'm grateful to Heavenly Father for his protection and guidance. I believe that my faith and I know nothing is impossible with God.”

Her passion for becoming a match official began when Magele was still young and being surrounded by a family who loves rugby and which was a part of the rugby arena.

"Ever since I was a kid, I was around rugby enthusiasts,” she said.

“I come from a family where [everyone is] really good at rugby: my dad is a match official himself; he was also a rugby match official educator; my big brother was a Manu Samoa Sevens player; and all my other brothers played rugby.

“I was looking forward to an opportunity to play but I never had the opportunity but then my Dad actually saw me having an interest in rugby so he wanted me to become a match official. So that was basically how I became a referee [...] that support from my parents, and also my brothers, my siblings.”

Her journey as a referee started in 2008 while she was still working as a teacher in high school but her first official match was in 2016.

"About five years later on, I went overseas to study to further my education, and then I came back and started again in 2016,” she said.

“In the same year (2016) I got my first international appointment in rugby as a referee to referee in the sevens."