A brave effort from the Manu Samoa Sevens has seen them beaten in the semifinals of the Dubai Sevens, with their performances dedicated to victims of Samoa’s measles epidemic.

They scored first, but lost 38-7 to South Africa in their semifinal, and will playoff for third place against England at 4am Samoan time.

An uncharacteristic error from Justin Geduld saw him put South Africa’s opening kickoff out on the full.

From the subsequent tap on halfway, Samoa got the ball to Tofatuimoana Solia who beat two defenders with a strong carry.

Just a phase later, Paulo Scanlan picked the ball up from the base of the ruck and sniped round the side, cantering in to score under the posts in the third minute.

But then Samoa made the first of a few key errors, with skipper Tomasi Alosio’s kickoff not travelling 10 metres.

The Blitzbokke pushed the ball wide to Zain Davids, who bumped off a couple of tacklers easily to level the scores.

Samoa took the resulting kickoff, but Elisapeta Alofipo dropped a pass cold on the 22 metre line to hand back possession.

Chris Dry scored for South Africa to make it 12-7 with two minutes left in the half.

Dry followed that up with an even more impressive effort; batting the kickoff back brilliantly to Ryan Oosthuizen as South Africa rolled into the 22.

That made for an easy try to captain Sipiwe Soyizwapi on the stroke of halftime.

Samoa contested the restart but knocked the ball on, and gave away another free kick from the resulting scrum.

Rosko Specman almost scored a spectacular 70-metre solo try for the Blitzbokke, but couldn’t quite recover his grubber and knocked on just short of the tryline.

It was an opportunity for South Africa’s aggressive defence to shine though, and they turned the ball over for Ruhan Nel to make it 24-7 in the 10th minute.

Any remaining hope for the Manu was extinguished when the Blitzbokke recovered the kickoff, before quickly scoring through Seabelo Senatla.

And fellow substitute Selvyn Davids completed the victory with a brilliant chip and chase try, as South Africa’s depth on the bench was on full display

Samoa opened the match with back to back penalties for being taken in the air at the kickoff and the Australia tackler not releasing at rucktime.

A nice switch pass from Paulo Scanlan sent his skipper Tomasi Alosio into the 22. Belgium Tuatagaloa beat his man one-on-one with a fend to score under the posts in just the second minute.

With their first possession of the match, Australia advanced the ball to halfway before earning a couple of penalties.

Elisapeta Alofipo was somewhat lucky not to receive a yellow card for what was fairly cynical offside play.

With Australia knocking on the door, Joe Perez was carded for knocking a pass to the open man on the wing out of the air.

The offence also drew a penalty try from the referee, tying the scores at seven.

Samoa did well to hold onto possession until Perez’s return from the sin bin with 20 seconds left in the half.

But they undid that good work with what was a gift try for Australia on the hooter, thanks to a brain fade from Belgium Tuatagaloa and Tofatuimoana Solia.

Solia knocked on, and both players just stopped without the referee blowing his whistle.

He was playing advantage, so Australia pounced on the ball and Maurice Longbottom scored under the posts to give his side a seven-point lead.

Paulo Scanlan opened the second half with a strong penalty win for holding on.

Solia then went on one of his trademark busts, bashing through three defenders to get the ball 10 metres from the tryline.

However Australia counterrucked well a phase later, forcing a penalty at the breakdown.

They went for a lineout on the 22 metre line, but threw the ball in crooked to turn it back over.

Samoa gave it to Joe Perez from the scrum, and he lost his man with a dummy and jump step to go through the line and under the posts with little over two minutes played.

They recovered the kickoff as well, and things got worse for Australia when Joe Pincus received a yellow card for taking the man in the air.

Tomasi Alosio got the ball over the line, although the TMO ruled his grounding was actually held up millimetres above the Dubai pitch.

Samoa were under advantage for offside though, and they spread it wide for Joe Perez to get his second try with the extra man advantage.

The Manu 7s kicked off up five points with 45 seconds to play, Alosio slamming the ball deep.

It bounced out just 10 metres from Australia’s tryline for a lineout.

With time up, Australia advanced the ball over halfway and drew a penalty for not rolling away.

They tapped and kept the pressure on, but Tofatuimoana Solia redeemed his mistake on halftime by getting over the ball at the breakdown and forcing the holding on penalty that sealed Samoa’s win. 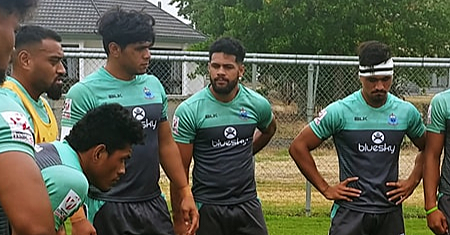