Fiji scoring one of their six tries in the 41-13 win. (Photo: Oceania Rugby)
Rugby union

While noting the strength of the victorious Fijiana in the Oceania Rugby Women's Championship World Cup, Manusina coach Ramsey Tomokino has been left to rue the factors that led to Saturday's loss.

Fiji's 41-13 win at the World Cup qualifier at Churchill Park in Lautoka means Samoa have to settle for a chance at the repechage tournament next year.

“We could see that we had them under the pump," he said.

“We were getting back to back penalties, so the pressure was going on them and we could see them getting flustered."

But the coach said all of a sudden his side were being penalised for offside frequently by the Fijian assistant referee, with the home team not subjected to the same scrutiny.

Tomokino said the inconsistency extended to quick tap penalties as well, with the referee holding up Samoa when they wanted to play quickly.

“Every time [Fiji] got a penalty, they were allowed to tap and go," he said.

Tomokino said the inconsistencies made one question why a neutral refereeing team was not used, and the Manusina expected better given the standard of the head referee:

"She should have realised that the AR calls were very one sided."

Regardless, the coach felt at 24-8 at halftime that a try would get them back in the contest. 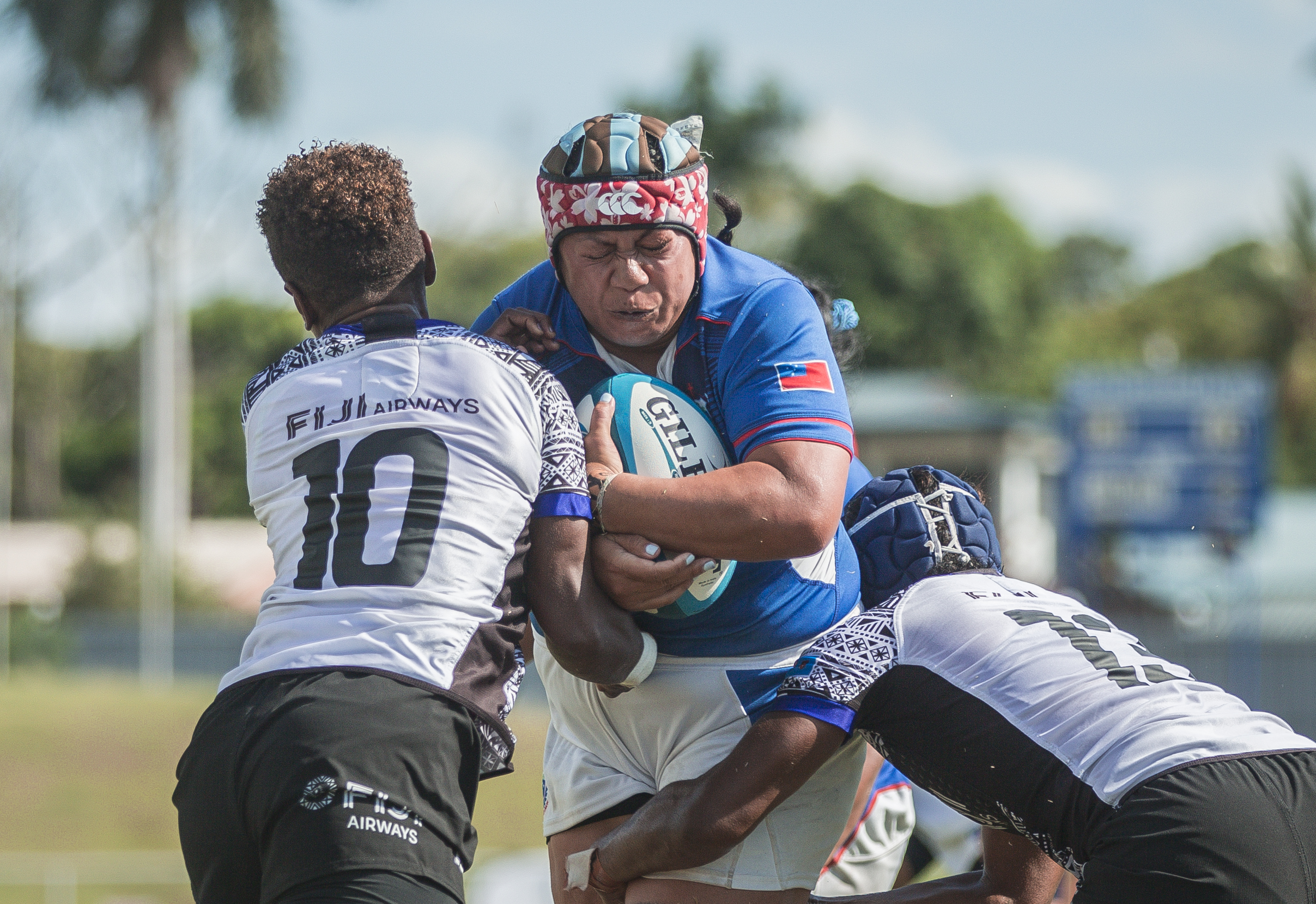 “Then that last 20 minutes, whether or not being that fourth game started to take it’s toll, against a fresh Fijian team," he said.

The Manusina had played against Australia A that Tuesday, while Fiji's last game before the qualifier was their previous match against Samoa the Friday before.

On top of the quick turnaround and mounting injury toll, Tomokino said the Manusina had to cope with sub-par accommodation that was a full hour and 15 minutes away from Churchill Park.

He said there were myriad examples of where the Oceania Rugby-provided hotel fell short, some of which were addressed after initial complaints but the service went downhill again.

“We should have just upped and left after the first week and said na, this isn’t good enough," Tomokino said.

“On the day of our final game, the restaurant failed to deliver a breakfast.

“Honestly it was appalling, the equivalent of prison food; porridge and baked beans that were off.

“It certainly made you appreciate that we actually do a really good job in Samoa in the hotel industry, especially around team sport."

Tomokino said to his players' credit, they didn't complain.

"[But] you shouldn’t expect that stuff at this level," he said.

The team were also rocked by the deaths of seven family members during the tour, because of and in addition to Samoa's ongoing measles epidemic.

Tomokino said all those external factors contributed to the disappointing result of his team missing out on their goal of automatic World Cup qualification.

Despite it all, the coach said Fiji were well deserving of that berth.

“Fijiana is a good team and they certainly deserved to get there," he said.

The tournament hosts have been playing together for the last two months in preparation for the tournament.

“The Fiji women’s game is strong. The fact that they could run out a development team to play PNG and beat PNG," Tomokino said.

“They’ve got massive numbers playing the game, and they’ve obviously got the benefit of all the girls living in Fiji."

That stands in contrast to the makeup of the Manusina, who fielded a mixture of women based in New Zealand, Samoa, Australia, the United States and Hong Kong.

Sunwolves out of Super Rugby after time runs out in pandemic

Sunwolves out of Super Rugby after time runs out in pandemic