Evalda Mika-Nansen, is the daughter of Krista Nansen and Lolesio Mika, and the fifth of nine children.

Born in New Zealand, Evalda told the Samoa Observer her parents do not allow her and her siblings to speak English at home.

"My parents forbid us to speak English at home, because they want us to speak fluent Samoan," she said.

This, she attributed for her success, saying she spent many late hours in the night spent preparing for it.

"I was up late many nights preparing for it. I also had a lot of help from my teachers, and my family, especially my mom," she said.

The young lass firstly acknowledged the mercy and help of God in her venture of intellect. 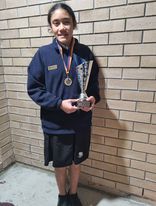 " I have to thank God first for without his help and blessings, I would not be able to achieve my goal to win the speech competition," she said.

" I also want to acknowledge our Church: Livingston Evangelism Ministry at Mangere. And I want to thank my dad Kuki Aloali'i and mum Lupe Aloali'i mo le tatalo mo a'u ma la'u aoga, for their prayers for my education," she said.

Asked what she wants to say to children of Samoan heritage, she encouraged them to speak Samoan.

"I want to encourage younger kids to still use their Samoan language to speak with. Because when we know our own mother tongue, we can become better professionals, such as lawyers, engineers, teachers and so forth," she said.

"I also encourage our young kids to learn their Samoan culture. It helps us when we get older to understand the good values that our families carry."

When asked by this paper for what profession she wants to work as when she grows up she alluded to being a journalist or an investigator.

" I want to be a journalist or an investigator when I am older," she said.

The young teenager also made reference to a popular media channel in Auckland New Zealand, Radio Samoa, with a tribute to the radio host Seumanu who had contributed to her love of the Samoan language since she was very young.

" I always like to go on the Radio Samoa to talk to Seumanu because he teaches us children a lot about our language and culture," she said.

Krista Nansen also made reference to another kids program by Radio Samoa hosted by Natasha Vaaelua.

" Saasia kids program is one of the kids program my little one 7yrs old, 6yrs old twin boys and my 3 yrs old including Evalda they love watching on Raido Samoa on Facebook. One of my good friends Natasha Vaaelua is running that program,  so that kids program helps my little one too," she said.

According to Evalda's mother, Krista Nansen, her daughter was a fan of the Radio Samoa show host.

"  So I witness that our Samoan Raido for our kids program that it helps my kids to learn new things everyday. So for me as a parent I encourage our Samoan parents to speak Samoan at home," she said.

" All our kids were born here but as a mother, I do not want my kids to loose their Fa'asamoa,  and that's why every night we do our lotu afiafi, we read the Bible, and say their prayers in Samoan. I forbid them to speak Samoan at home after school. Now their obedience shows fruit," she said.

" I want to thank the Principal Mr Esera, the deputy Principal Mr Lemalu and the rest of the blessed teachers for teacher Evelda and helping her in her efforts," she said.

Ms Nansen also made reference to her children's families in Samoa.