Samoa
The Talafalu tree held up by the British High Commissioner David Ward and the MNRE ACEO Seumalo Afele Faiilagi before they plant it. (Photo: Junior S. Ami)
By Victor Ale •   06 June 2022, 10:07PM

Her Majesty The Queen’s Platinum Jubilee – the 70th Anniversary of Her Majesty’s accession to the throne of the United Kingdom – was marked in Samoa on Monday with a tree planting ceremony.

The ceremony was held at the Vailima Botanical Gardens and was attended by the British High Commissioner to Samoa, David Ward together with the M.N.R.E. Assistant C.E.O. Seumalo Afele Faiilagi, the Samoa Conservation Society President, James Atherton and a Nuanua o le Alofa (N.O.L.A.) representative and guests.

The event started off with formalities before proceeding to the planting of the talafalu plant led by Mr Ward and Seumalo. The plant choice made by the event’s organisers – to mark the Queen’s Green Canopy and the World Environment Day Tree Planting in honour of Her Majesty’s Platinum Jubilee – was the talafalu. 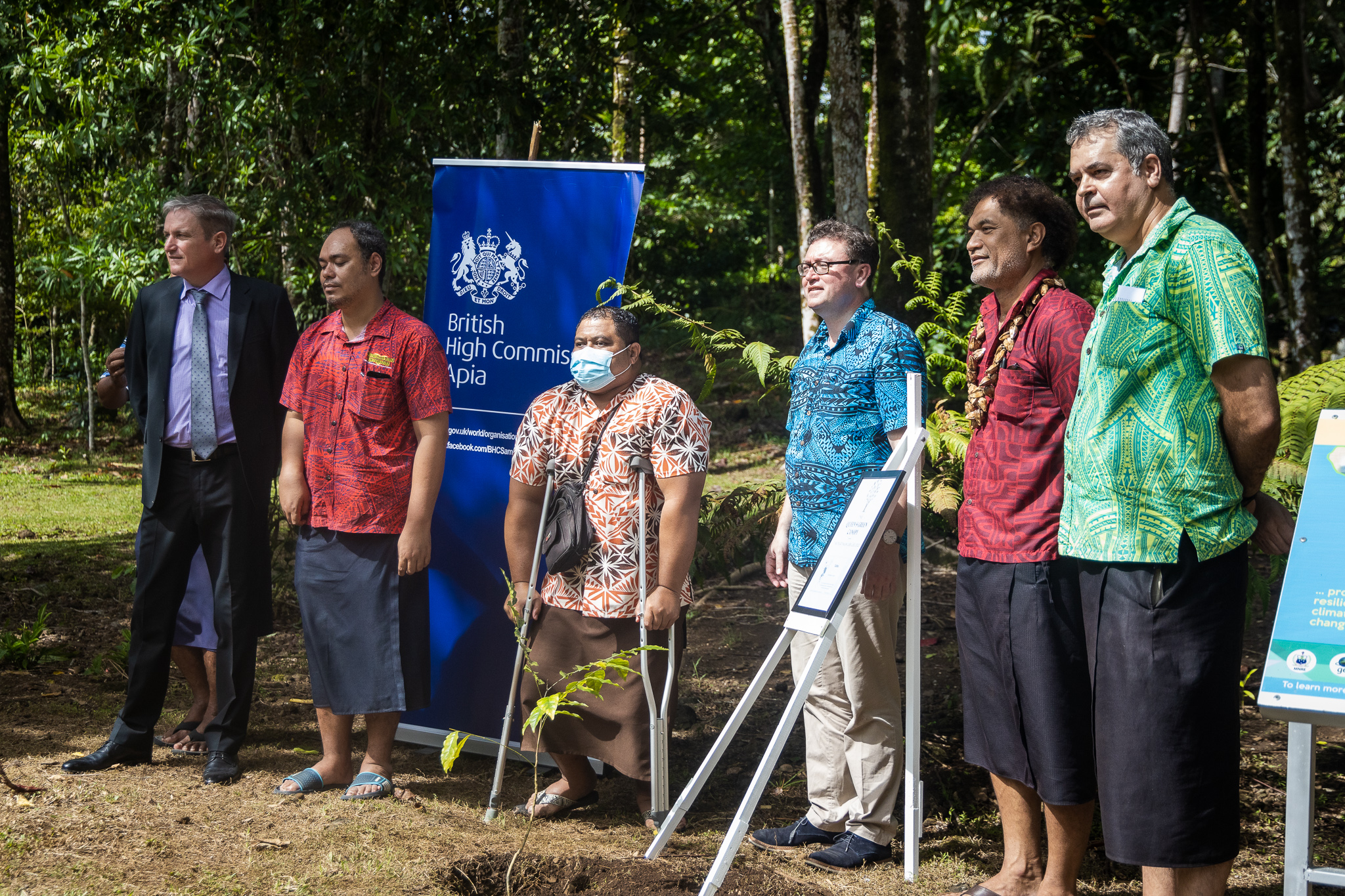 Mr Ward said Her Majesty The Queen’s Platinum Jubilee was marked in the UK and people celebrated the 70th anniversary of her accession to the throne.

[Her Majesty] has become the longest reigning monarch in British history and has been a model of service—of voluntary service—and also a great supporter of conservation work,” the High Commissioner said on Monday.

“[Her Majesty] and her family including her late husband who was President of the Worldwide Fund for nature for many years. 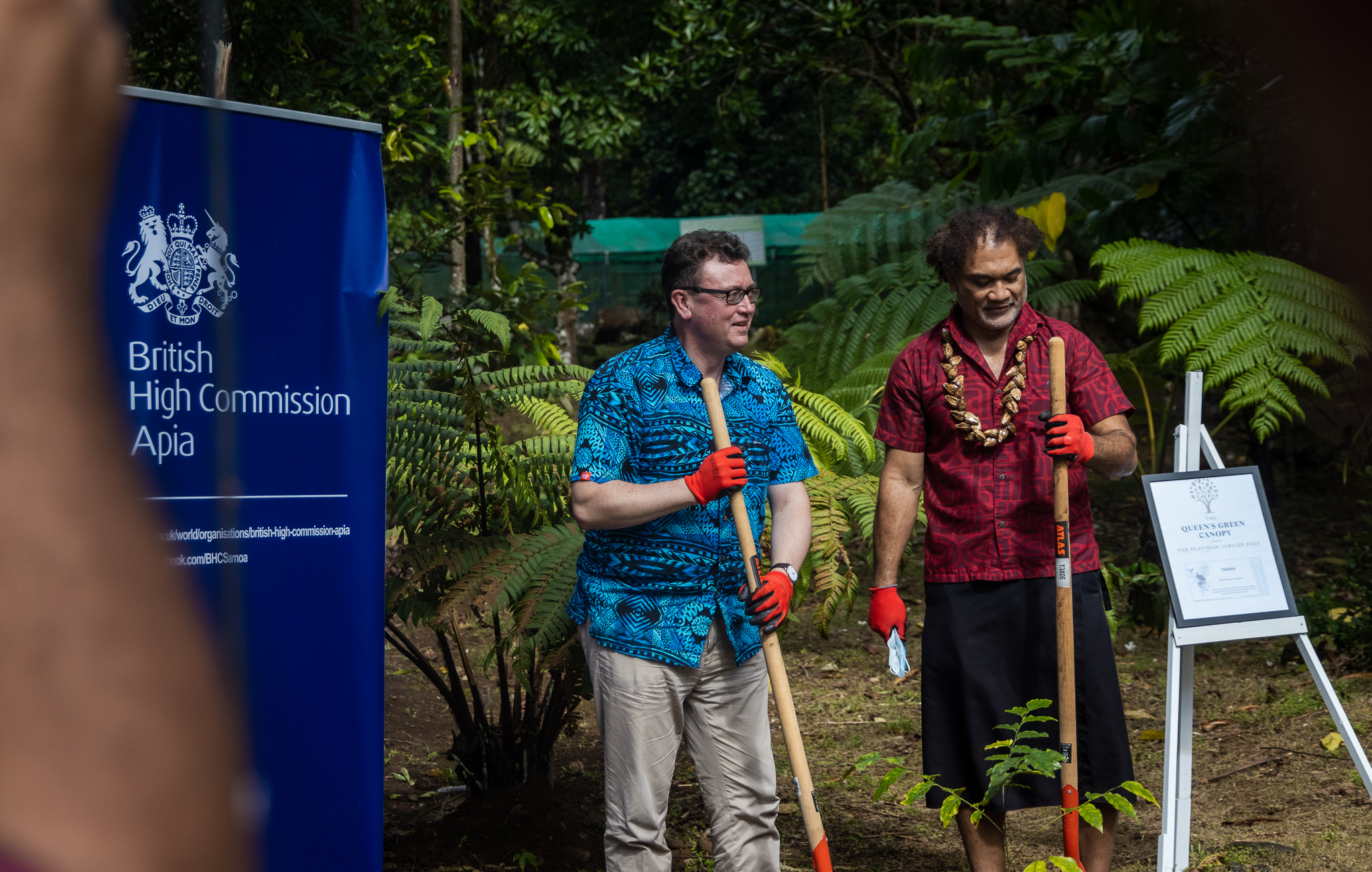 “[Her Majesty] would approve very much, I think, of us being here in Samoa where she herself planted a tree on her Silver Jubilee in 1977 when she visited, perhaps in the very grounds of this Botanical Garden.

“So it’s a great honour for me to be able to represent her here—45 years later—to plant another tree and follow in her footsteps.”

The British diplomat said the celebration of The Queen’s Platinum Jubilee is also a celebration of the environment and all the work being done to preserve the biodiversity of the planet as well as tackle climate change.

“We are celebrating Her Platinum Jubilee but we are also celebrating the environment and the importance of all of our work to preserve the biodiversity of the planet and to tackle the challenges which the world faces—the world environment—including climate change. And by planting a tree today we contribute to solving those problems.” 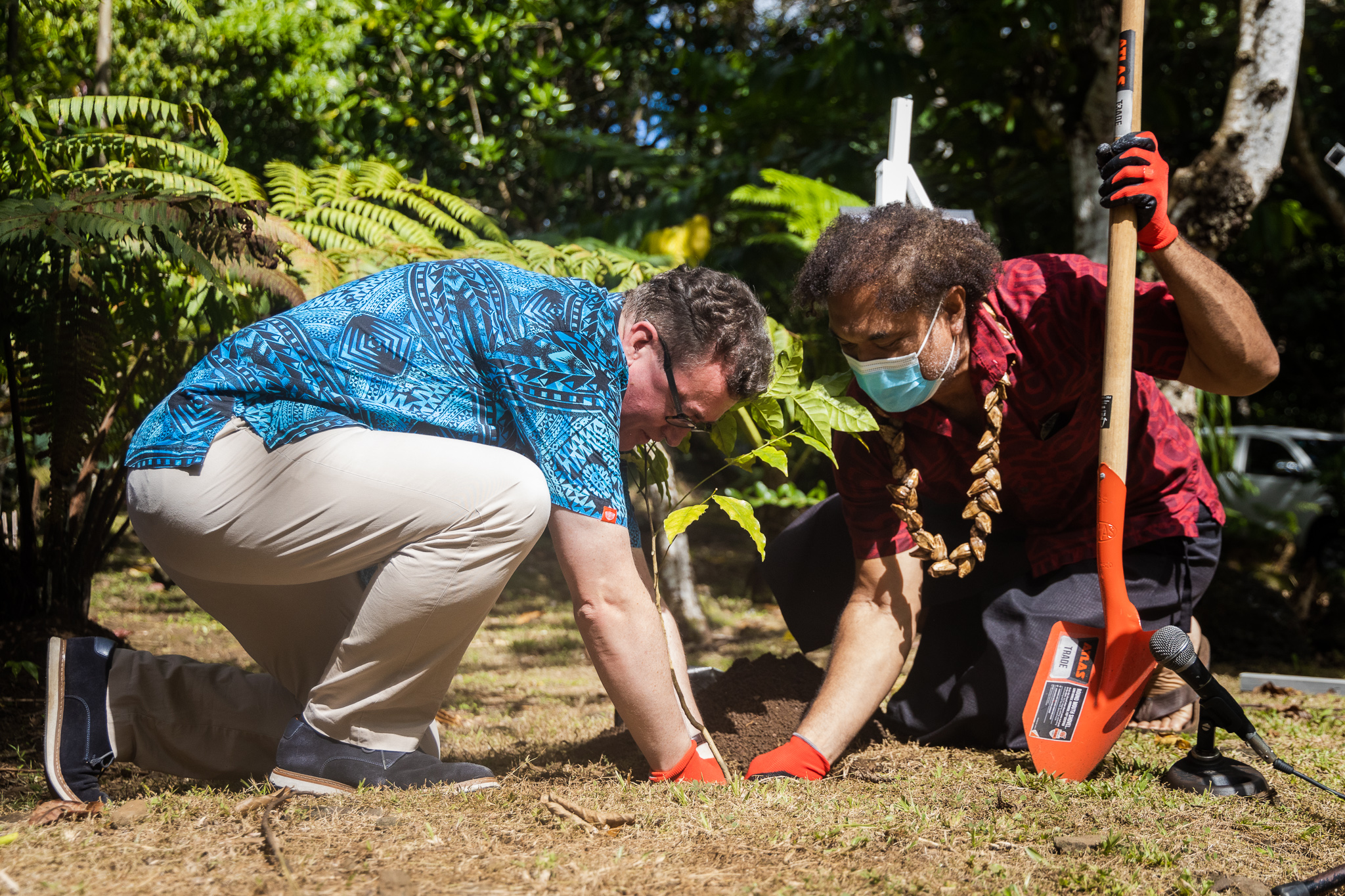 Mr Atherton said the talafalu (micromelum minutum) is in the citrus family and is related to oranges, mandarins and lemons. It is a coastal plant but is no longer common in Samoa, due to the loss of coastal tropical rainforests.

The plant used to host Samoa’s now extinct swallowtail butterfly the “pepe’ae”, added Mr Atherton, which disappeared around 1980 from Samoa but was re-discovered in 2009 in American Samoa.

According to the S.C.S. President, the butterfly species had a wingspan of about 10 centimetres.

“We hope to re-introduce it back to Upolu and Savai’i from Tutuila, but we need to plant more of these first because these are the host-plant,” he said. “So what we hope is this is the first of what we hope to be a concerted effort to plant more talafalu here and elsewhere.”