The Ministry of Agriculture and Fisheries marked World Bee Day 2022 this week by celebrating the contribution of the bee-keeping community and raising awareness on their importance.

The Ministry will also educate people on why the protection of bees is vital to the existence and survival of humanity. The theme for this year’s celebration is “Bee engaged: Celebrating the diversity of bees and beekeeping systems.”

The M.A.F. released a statement recently highlighting the significance of the celebrations focusing on bees and their link to food security and agriculture in Samoa. 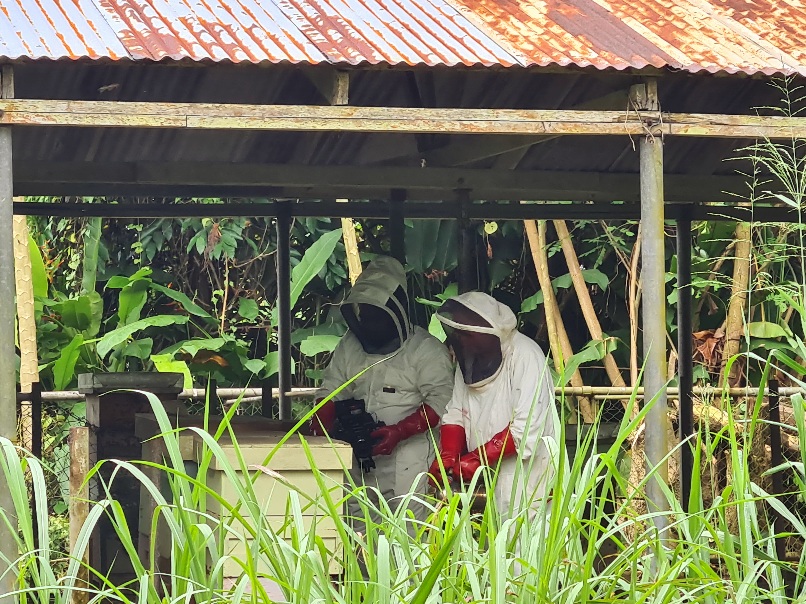 According to the Ministry's statement, the beekeeping community have slowly recovered over the last five years with honey products appearing on store shelves in the country, since the near decimation of the honey industry in the aftermath of Tropical Cyclone Gita in 2018.

Despite the slow recovery, a founding member of the first Beekeeping Association of Samoa in 1976, Raymond Voigt of Pesega said it is encouraging to see a revitalised interest in the honey bee industry with more farming organisations looking to work together to lift the number of hives in Samoa.

“We started the Beekeeping Association of Samoa back in 1976,” said Mr Voigt. 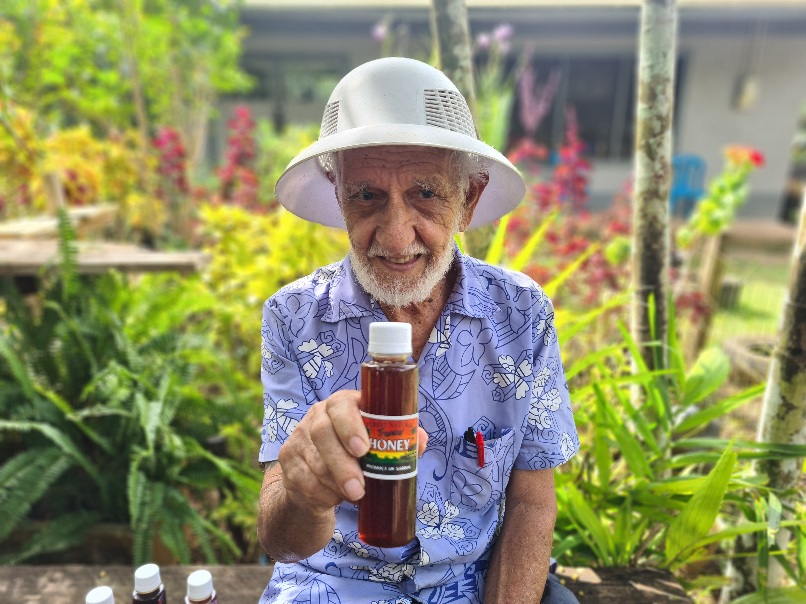 He added that they reached about 50 members but eventually people lost interest, because they realised it’s not a quick money scheme, and didn’t want to take a “hands on” approach to caring for bees.

“The whole thing dwindled and now there’s just a core group of people who are interested in carrying it on so we discontinued as an incorporated society and continued as a community based group,” he said. 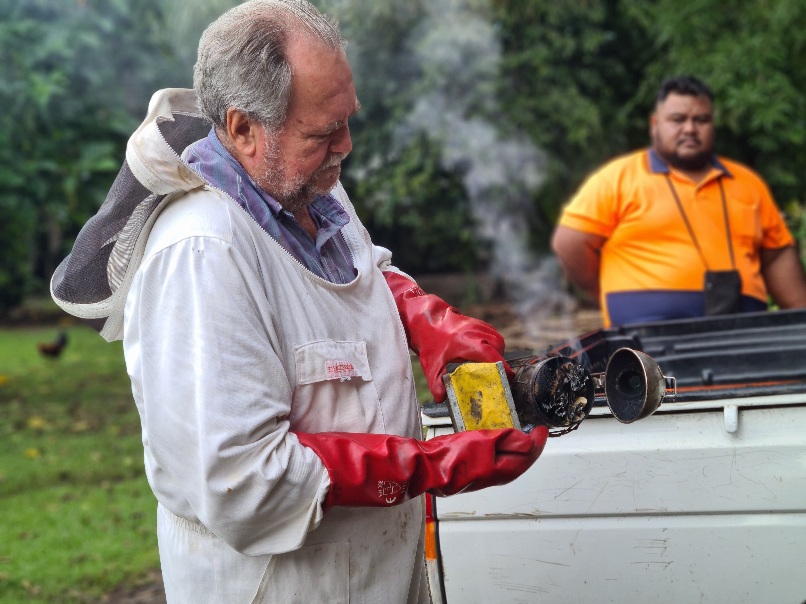 “We now hear they want us to incorporate as a society so we’ll try that route again and see how it goes.

“There are various organisations that are interested in bees such as the Samoa Farmers Association, Samoa Federated Farmers Incorporated and Samoa Womens’ Association of Growers.

“It’s encouraging to see a renewed collective interest and we would like to see people take a more hands on approach.” 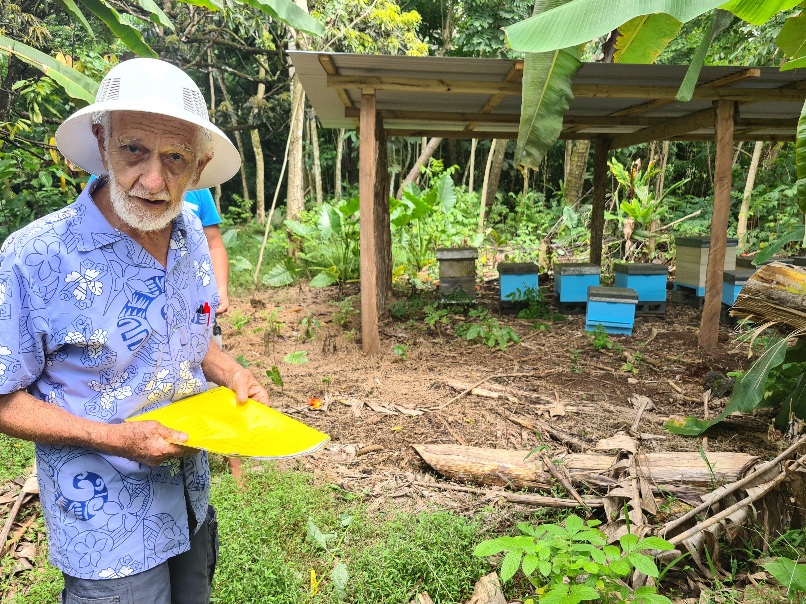 The C.S.S.P. funding will enable the building of an extraction facility in Magiagi village for those interested in harvesting their own honey.

With only just over 400 beehives in Samoa, Mr Voigt said this will encourage growth in the industry, attract more people to take up beekeeping, address the honey shortage in Samoa and ultimately move the beekeepers industry closer to their long term vision of exporting.

“We are finalising the process of building an extraction facility in Magiagi  which means beekeepers can go in and harvest, extract, put back their frames and sell their honey” he said.

“There’s a shortage of honey because of the small amount of beehives so we need to take that number up to 1500 hives. Then we can realise a larger harvest of honey like back in the 1980s when Samoa German Bee Company was operating. They had 1500 beehives and exported honey to Europe.

“We are looking long term at exporting because right now the market in Samoa is four tonnes and its growing - we can’t keep up. We’ve experienced a good harvest from Savaii.

“This is why we are increasing hives there because of the large forest, vast amount of blossoming plants and uninhabited areas.”

With Samoa celebrating World Bee Day for the first time this year, another early founding member of the Samoa Beekeepers Association, Lester Dean of Saleimoa, said he had never heard of an international Day for Bees before.

But he said he feels encouraged seeing more awareness in the media about the plight of the bees and their invaluable impact on the environment.

Mr Dean and members of beekeeping community want to remind us that bees are not just a good source of natural food.

Bees also play a critical role as pollinators in our agriculture sector by increasing crop yields and promoting food security. Without bees, various flowers and vegetable crop numbers would decline.

“The fact is, the more bees pollinate your fruit and vegetable crops, the higher your yields and size of fruit,” said Mr Dean. “Without the bees there would be a lot less food to eat and it’s the same throughout the world.  If bees became extinct, there will eventually be no life on earth.”

In addition, organic farmer and beekeeper, Mele Mauala said there are multiple ways Samoans can get on board with protecting bees and keeping them off the extinction list.

“Let’s preserve our wild bees, don’t kill them,” she said. “There are potentially 20 different species in Samoa who contribute to pollination of native species and agricultural crops.

“Pesticides and herbicides are deadly to bees and other pollinators. They are also not good for humans. We should all try different ways to protect our crops, animals and our communities.”

Feebee Honey producer, Sione Alailima of Vaoala has been a beekeeper since 2017, and says the visible impact of bees to his surroundings cannot be underestimated.

He started beekeeping as a way to earn extra income to support family and village commitments after relocating permanently from the United States of America to Samoa in 2017.

“Without bees we would basically starve,” said Mr Alailima.

“Which is why, we are very adamant in maintaining as much of the natural environment as we can because this is where our bees forage and feed from.

“If we don’t maintain it then the bees would have nothing and in the end we will have nothing.”

Mr Alailima keeps his bees in two locations in Siusega and Vaoala on family properties and currently has a total of 15 beehives and plans to increase to 25 beehives by the end of the year.

His goal is to reach 40 hives and hopes the government will support the industry in creating pathways to export markets.

Although beekeeping requires a lot of work especially in the beginning, Mr Alailima says it can be rewarding if you’re prepared to put in the hard work.

“To become a beekeeper and honey producer, it’s important to understand that it’s not a quick money operation,“ he said.

“You have to have patience and diligence but the reward is there at the end when you see your harvest from the bees.

“It’s hard to describe the feeling except you  feel very happy because you see the fruits of your labour and you’re doing a lot good for the environment too.”

World Bee Day is normally celebrated on 20 May every year.