Samoa
A photo of Prime Minister Fiame Naomi Mata'afa when she dyed her hair pink in support of Pinktober (Photo: Supplied)

Prime Minister Fiame Naomi Mata'afa has been challenged by the opposition leader to "go bald" in support of Pinktober, the month dedicated to raising breast cancer awareness.

Tuilaepa Dr. Sa'ilele Malielegaoi laid down the gauntlet while responding to queries from the media on Thursday morning, on whether his party had anything special planned in commemoration of the lives lost to cancer.

The month of October is recognised as the month of "Pinktober", during which individuals and organisations support and raise breast cancer awareness. It is designed to promote awareness and encourage women to get tested so that breast cancer can be detected at an earlier stage.

While Tuilaepa said that wearing pink was important to the cause, he said the Government needed to be more active in its support. 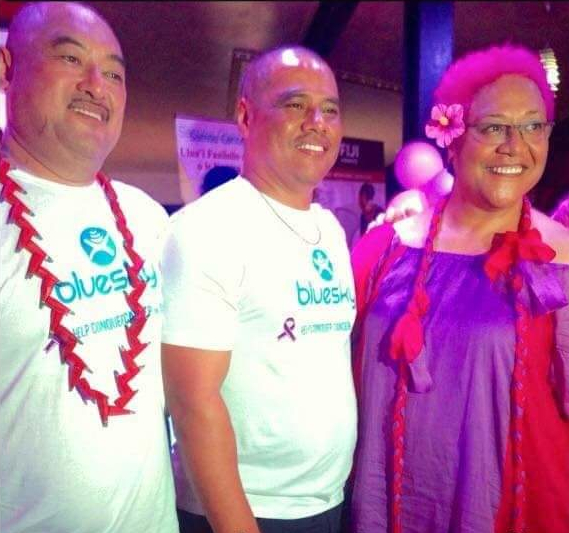 "We can wear pink all we want, but it all comes down to what is done by the government to assist and support (cancer patients)," Tuilaepa said.

"For many years, I have been very supportive of the efforts and programmes in place for cancer.

"I ended up shaving my hair for one year because of that. I could be the only leader in the world who has done something silly like that.

"I had to shave my hair and it made me look unattractive. It was quite an experience, because as I was having my hair shaved, I turned around and saw women crying so I had to look the other way.

"And I think we raised over $100,000 tala at the time and I said to the Samoa Cancer society, they should've informed all the businesses in the country that the Prime Minister was going to shave his hair, they would've raised a million tala."

Tuilaepa's head-shaving stunt was followed up by the then-Prime Minister tie-dying his hair for the same cause, one year later.

In 2017, Samoa became the first Pacific Island to paint a national monument pink to promote cancer awareness, joining other famous monuments around the world including the Empire State building, the White House, the Eiffel Tower and the Sydney Opera House that have been illuminated with pink lights to raise awareness on breast cancer.

With Tuilaepa's approval, the Samoa Cancer Society painted the war memorial clock in downtown Apia pink to commemorate Pinktober back in 2017.

(It was illuminated this year in memory of those lost to cancer).

"If this is important to you, shave your hair.

"But I don't think any (other leader) who would do that does not matter anymore."

When contacted for a comment, Prime Minister Fiame giggled: "Doesn't he have anything better to do?”

"Is he going to shave his hair too? I dyed my hair pink when he shaved his hair.

"I opened the launching of Pinktober this year, our Cabinet wore pink on the first Wednesday of October and I will be attending a fundraiser for Cancer tomorrow night."

At the beginning of this month the Fa’atuatua i le Atua Samoa ua Tasi (F.A.S.T.) Cabinet declared their support behind the Pinktober Cancer campaign to support the Samoa Cancer Society and its stakeholders.

In supporting the Samoa Cancer Society and residents battling cancer, the Cabinet Ministers led by Prime Minister Fiame Naomi Mata’afa were decked out in pink attire to symbolise the start of the PinkTober month.

The Government Press Secretariat recently said the Cabinet would wear pink every Wednesday this month in support of the cause.

“Pinktober is invaluable for education and advocacy and driven by the Government, the Samoa Cancer Society and stakeholders to encourage the public to take preventative health measures and use assistance rendered by the Society and the Ministry of Health,” the statement said.

One of the projects that the Cancer Society is working on in collaboration with the Ministry of Health is to set up a National Cancer Registry – to record every cancer diagnosis in Samoa along with crucial biological data and information about the patient's gender, age and the specific types of cancer.

Every year in October, the world comes together to mark the month commemorating cancer and its victims.

The Prime Minister officially launched the Pinktober month commemoration with the Cancer Society at the A.N.Z. Bank business premises on the 7 of October.

Besides awareness and advocacy programs on cancer rolled out over the duration of the month, the Cancer Society will also be running a number of fundraising initiatives with the funds raised to support their current programs.