A rugby team in a rural village involved in a mass assault on a referee are among more than 30 players to have been banned from playing in national rugby tournaments.

Twenty five players from the Levi Saleimoa rugby club that were involved in assaulting referee Posi Isamaeli have been banned for the next five years from any rugby tournaments and even being seen at the field during matches.

Subsequently the village council of Levi Saleimoa has dissolved the rugby club saying the team will no longer be represented.

The names of the players were released in an internal memorandum on Wednesday from the Lakapi Samoa Events and Competition Coordinator, Seiuli Salesa Seiuli to all rugby union clubs.

The memorandum highlighted five rugby players that have been banned for life from the tournaments most were involved in allegedly assaulting referees during tournaments in 2020 to 2021.

In the confidential communication to the clubs, Seiuli noted the players on the "black list" are forbidden from participating or even being seen on the fields where any rugby tournaments are held.

The memorandum comes ahead of the Vodafone Iva Savaii 7s rugby tournament that will attract hundreds of spectators and clubs to the event that begins on Friday this week.

The most recent players that are listed are 25 members from the Levi Saleimoa club that are banned for 5 years except for one player – Uluaipou Ioane that is hit with a life ban.

A village matai and representative on the dissolved rugby club confirmed that following the incident where a referee was assaulted by the players the village agreed they will no longer have a rugby team.

In April this year the club was up against the Tufulele team in a Tuamasaga rugby tournament when a referee that officiated Oceania rugby matches was assaulted by the players.

Lakapi Samoa at the time provided support for the referee and condemned the actions from the men and will take disciplinary actions on the players.

Videos of the brawl showed the referee running to a church minister’s home for refuge while the players and some of the spectators were chasing after him.

Meanwhile, the Lakapi Samoa Events Coordinator has informed all rugby clubs in the districts to take note of those being banned by the union from any matches.

Seiuli had urged the President of all rugby clubs for their support and send in their list of those being disciplined and their penalty so they can notify other rugby teams in the country.

The list of those banned from the tournaments are listed below: 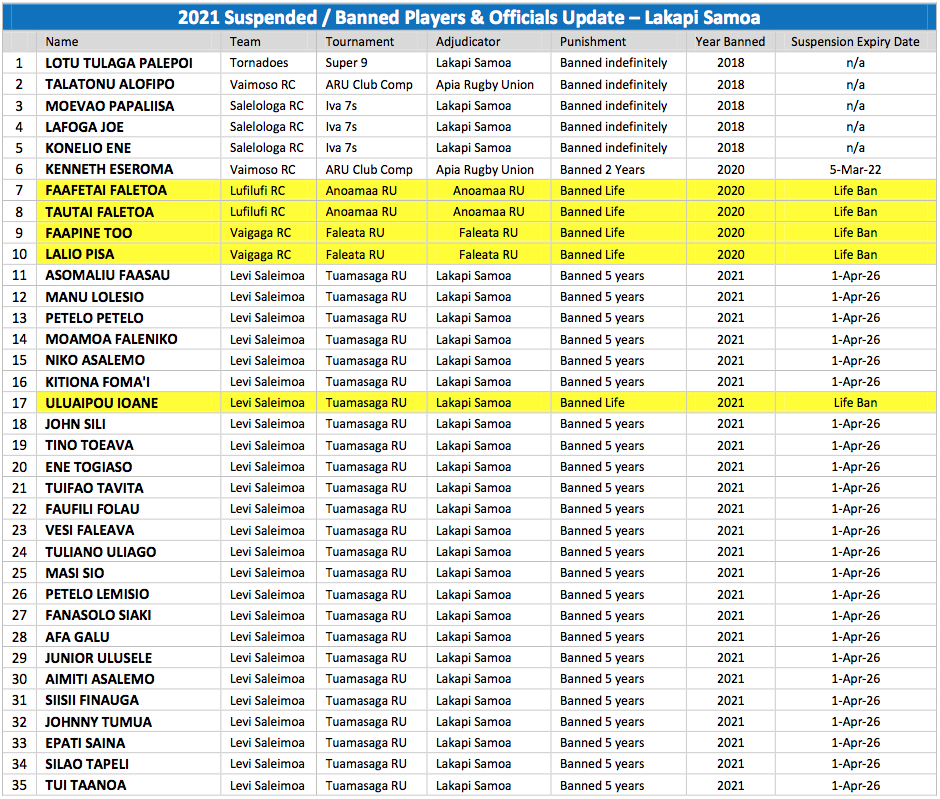