The United Kingdom’s High Commission in Samoa found that they emitted 11.5 tons of carbon dioxide last year after completing an audit of their environmental footprint, an amount they now aim to offset.

The diplomatic mission will plant trees to offset its impact on the environment.

A carbon audit is a means of measuring and recording the amount of greenhouse gas emitted by an organisation.

About half of the power in Samoa comes from diesel-powered electric generators.

Each kilowatt-hour of electricity generated produces around 2 kilograms of carbon dioxide.

The diplomatic outpost recently conducted a carbon audit with the assistance of the Samoa Conservation Society (S.C.S) which found that approximately 50 per cent of their emissions stem from the use of air conditioning.

Computers come in second accounting for 22.73 per cent of power consumption while fluorescent lights accounted for 8.79 per cent.

The Acting UK High Commissioner to Samoa, Ian Richards, told the Samoa Observer on Tuesday that they were motivated to conduct the carbon audit as the UK is hosting COP26 this year,

The High Commission had done the work with the environmental group the Lanulau'ava Student Association.

Mr. Richards said that they wanted to do something to show their substantial commitment to reducing global emissions.

"We decided to do something that will be useful for us that hopefully will mean that we become more conscious of our own carbon footprint and therefore can do something to reduce that,” he said.

“But at the same time [it might] hopefully be something of a model [for] other diplomatic missions but also companies, organisations in Apia and other parts of Samoa.” 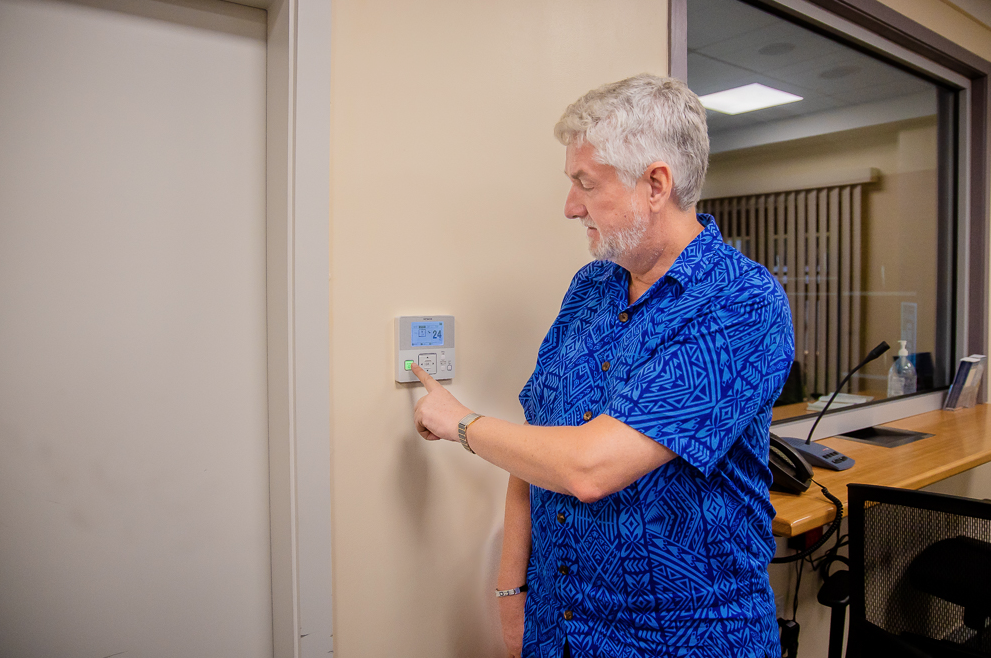 The U.K. High Commission in Samoa Corporate Services Manager Leusogi Amelia Ape told the Samoa Observer on Tuesday that after the carbon audit, they had realised that the cost of running the office was actually cheaper.

"But we could have never realised these things until James [Atherton] did his research," she said.

Mr. Richards said that the carbon audit revealed that they are estimated to have contributed 11.5 tons of carbon dioxide last year.

"Simply the fact of going through this process, I think, is a very important learning tool because I think every one of us will now be a little bit more careful," he said.

The Carbon audit had also shown that some of the lights used in the office are old-fashioned and are not energy efficient. In the future, they will also be looking into more energy-efficient vehicles.

One of the recommendations of the carbon audit is to install office fans and promote the use of natural ventilation during cooler months with the aim of cutting-back on air conditioner use by at least 1 hour per day over the course, which Mr. Richards explained they have started doing.

Based on calculations from the S.C.S, the Uk High Commission in Samoa will need to plant 69 trees to offset their carbon emissions, and already have a date set for that.

"So what I would like to see us do is have a kind of target in our minds, we haven't yet set that target, that by the end of the year we will have reduced the carbon footprint, let's say by 25 per cent just for example, and then we'll think of the ways we're going to achieve that. then we will plant trees and I imagine we'll plant trees next year as well but I hope that there will be let's say 50 or even 40 trees rather than 69," he said.

Mr. Richards encourages other diplomatic missions to conduct a carbon audit and would be willing to share our experience.

"because it has to be the right thing to do. Simple. We're all talking about the problems of the environment and that COP26 is almost the last chance to sort out these problems," he said.

"I'm not going to lecture the other High Commissions and Embassies but I would certainly encourage all organisations in Samoa to be thinking about this."

Leusogi also stated that they have discussed this with other UK High Commission in the Pacific and are planning to do the same with Samoa.