The silver van allegedly involved in the crash with another vehicle. (Photo: Junior S Ami)
BP
By Bethel Peato Ale, 25/09/2021

Witnesses have claimed an allegedly sleepy driver was the cause of an oncoming car crash at the Vaimoso traffic lights on Saturday afternoon at 12.45 pm.

The accident, witnesses say, involved a silver van ramming into an oncoming car and continuing to run down the iron perimeter fence at the SouthPac Rentals business before it collided with an oncoming vehicle. 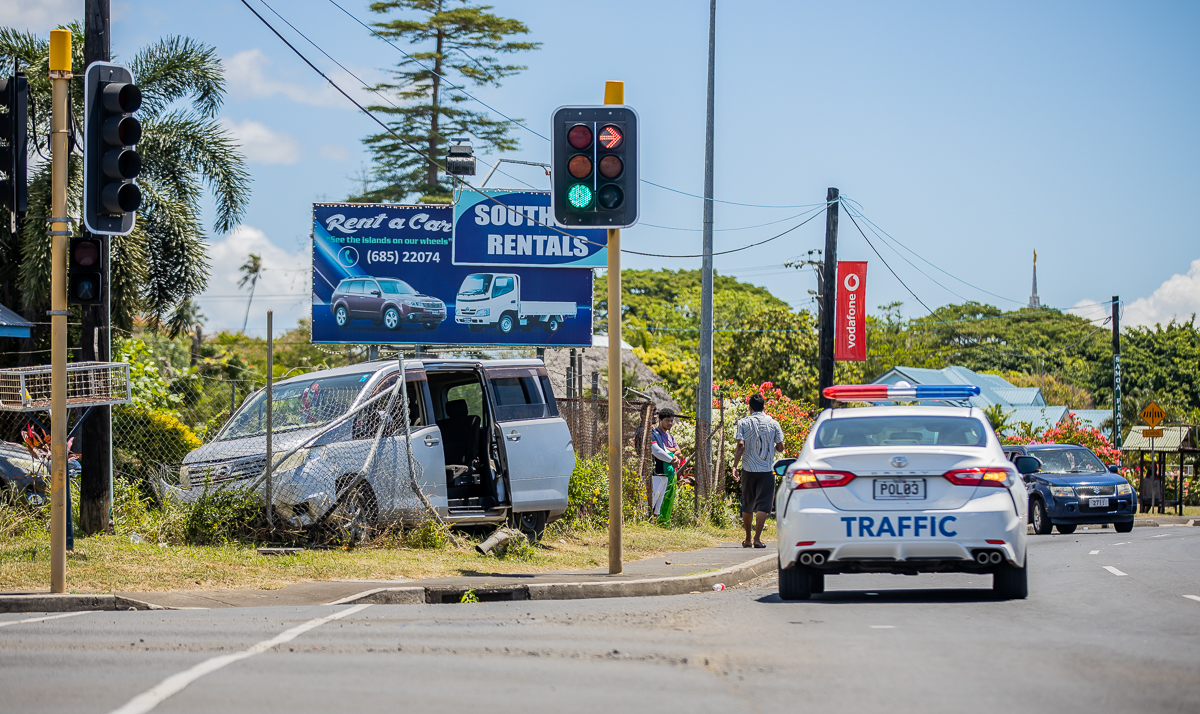 Police personnel at the scene of the crash, who declined to be named because they were not authorised to speak to the media, said that the accident was caused by the driver falling asleep momentarily before colliding with the incoming vehicle.

The incident delayed traffic for a full thirty minutes.

The van was headed towards the town area when it is alleged by witnesses to have swerved into the opposite lane where it is alleged to have rammed into an oncoming Sports Utility Vehicle (S.U.V.) before continuing onto overrun the SouthPac Rentals’ iron fence.

No one was injured in the incident; the vehicles involved suffered significant damage. A tow truck was later at the scene.

“We asked the driver of the silver [van] about what caused him to swerve into the opposite lane and he said that he had been running family errands since 4 am,” a Police officer said.

“Other passengers inside the car with him were his wife and four children who escaped the crash unscathed.

“He said as he was nearing the junction in Vaimoso at about 12.30 pm when he suddenly dozed off due to exhaustion.” 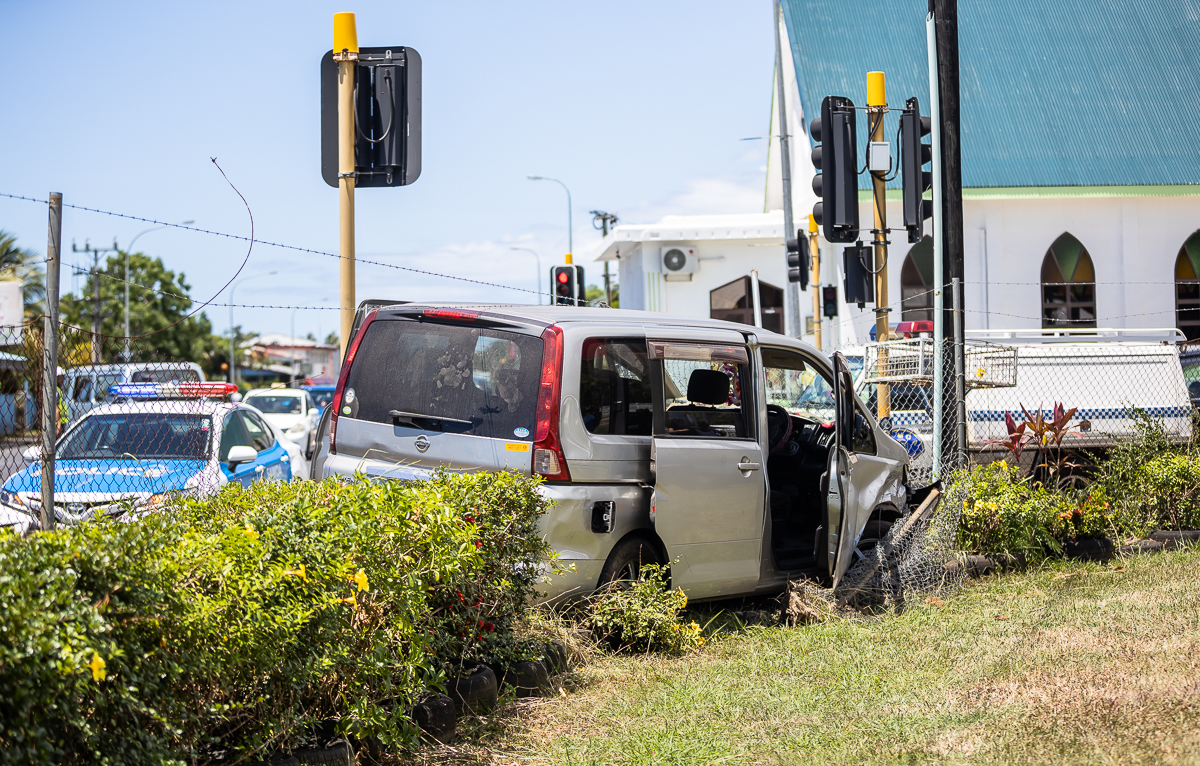 A witness at the scene who declined to be named corroborated the Police officer’s version of events.

“I was waiting for a bus at where the St. Mary’s intersection is when I saw the [van] jump over from the other lane and hit the side of the [other vehicle], before it rammed into the iron fence of SouthPac Rentals,” he said.

“I ran over to see if anyone was hurt, but thankfully no one was injured or was in any fatal condition.”

Police present said that alcohol consumption was not a contributing factor.

“We arrived on the scene and conducted a breathalyser test on the drivers of both vehicles involved and found that they were not intoxicated,” an officer said.

“Apparently it was just a lack of sleep which caused the vehicle at fault to crash into another vehicle and into the iron fence.

“We will be taking them both to the station for further questioning regarding the matter.” 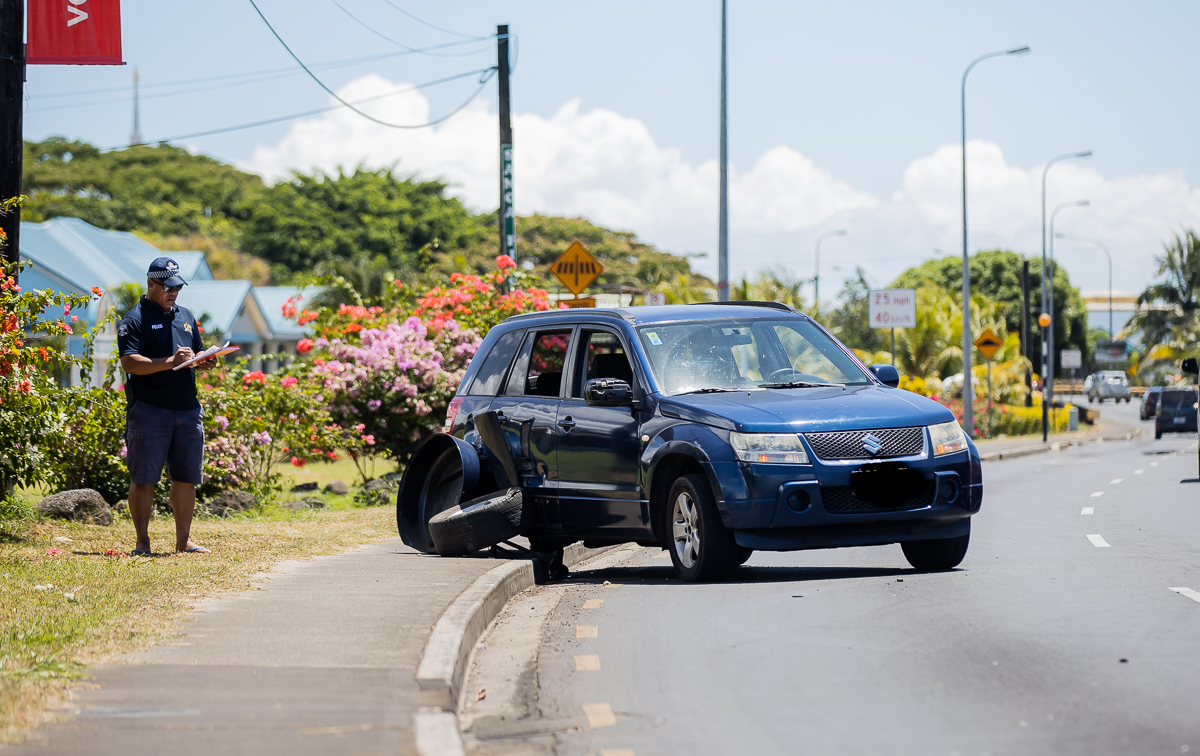 The driver of the navy blue S.U.V. said he was surprised to have found himself at the scene of the crash.

“When he suddenly was coming in front towards me I tried to avoid him,” they said.

“I’m just dumbfounded no one died because the other car was travelling at a high speed, thankfully only the vehicle's right back wheel and side were damaged but no lives were lost.”

Works to eliminate violence against women and girls needs a concerted effort by all parts of a society, the community, women’s movements, churches, villages, government, civil society organisations and in particular work with men and boys.