Two of the nation's most senior public servants were conspicuous by their absence on Saturday as the newly declared Government met the heads of all Government Ministries on Saturday.

Several sources have told the Samoa Observer can reveal that the nation's Attorney-General, Savalenoa Mareva Betham Annandale, who was central to the fight to keep the previous administration in power said she would not be able to make the meeting with the new Government.

But several sources have told the Samoa Observer she phrased the matter slightly more pointedly: saying she would be too busy drafting her letter of resignation to attend.

As of Saturday afternoon, it is understood that she had not tendered her resignation letter to the new Administration.

Attempts to seek comment from Savalenoa have been unsuccessful. But if she does end up quitting she will have only lasted one year as Samoa's principal legal officer.

It was this week last year exactly that Savalenoa was announced as the new A.G. of Samoa, succeeding former A.G. Lemalu Herman Retzlaff.

Also absent was the Clerk of the Legislative Assembly, Tiatia Graeme Tualaulelei, who only months ago played a starring role in what has become known as the "tent event": the ad-hoc swearing-in ceremony that was held on 24 May on the lawns of Parliament House.

Tiatia and the new Prime Minister famously exchanged some terse words on that day, on which he said he was merely following orders to keep the Parliamentary precinct locked.

The meeting is currently underway at the Maota of Samoa Event Centre at Vaitele fou between the F.A.S.T. Members of Parliament and the Chief Executive Officers of all State Ministries and agencies.

Well placed sources told this newspaper that all Ministry and agency heads were present except for the Legislative Assembly Clerk Tiatia Graeme Tualaulelei and the Attorney General, Savalenoa Mareva Betham-Savalenoa.

Everyone, with the exception of Leasiosiofa’asisina and the Acting and Deputy Police Commissioners, took their private vehicles to the impromptu meeting on Saturday morning with the new Government.

Photos posted on the official Facebook page of the F.A.S.T. on Saturday showed various Government heads of Ministries and agencies meeting with the party leader and Prime Minister, Fiame Naomi Mata'afa and her Cabinet Ministers. 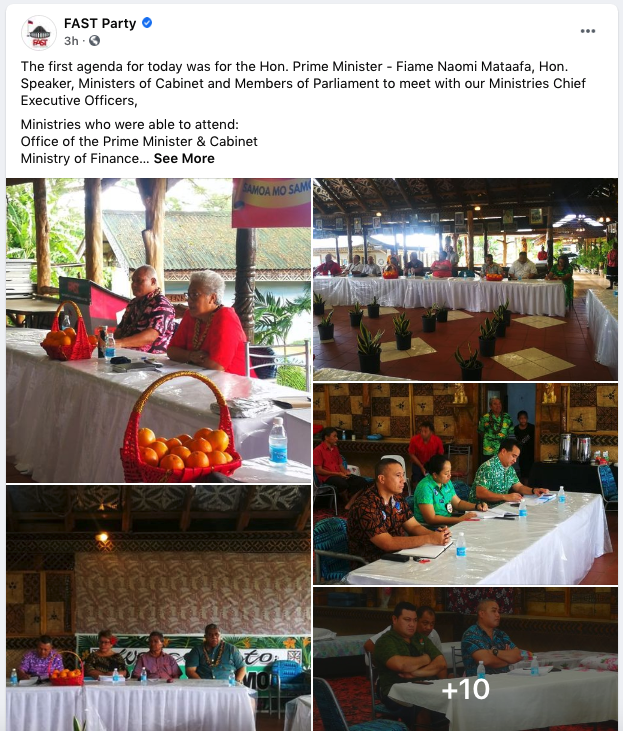 The meeting between the new Administration and the senior officials comes a day after the Court of Appeal ruled that the F.A.S.T. party had been Samoa’s official Government since 24 May, after the ad-hoc swearing-in under a tent outside the Parliament House in Mulinuu due to the House being locked.

The Appellate Court found that a Government swearing-in ceremony conducted by the party itself on the lawns of Parliament on 24 May was in fact legally binding.

That conclusion had the effect of immediately installing F.A.S.T as the nation's new Government, and declaring that it had been so for nearly two months, with the Court also ruling that the Human Rights Protection Party (H.R.P.P.) had been unlawfully occupying the office as "caretaker Government".

The decision by the Court of Appeal apparently brings to an end the 22-year reign of Tuilaepa Dr. Sailele Malielegaoi as Samoa’s Prime Minister.

Under the court's order he will be succeeded by Samoa's first female Prime Minister, Fiame Naomi Mataafa.

In their conclusion, the Court of Appeal said that for the avoidance of doubt, Samoa has had a lawful Government since 24 May, namely that led by the F.A.S.T. party.

• This story was updated to include social media post details extracted from the official page of the F.A.S.T. showing Fiame and her Cabinet meeting with the various heads of Government ministries.