The Tiapapata Art Centre is tackling the issue of domestic violence in Samoa from a new perspective.

It did this yesterday with a seminar called “The Anxiety and the Cycle of Violence” led by the Manager for Primary Health Social Work and Mental Health in Tasmania, Tua Agaiava.

Studies conducted by U.N.I.C.E.F have shown that Samoa displays among the highest levels of violence and aggression in East Asia and the Pacific.

The prevalence of domestic violence and child abuse in Samoa is concerning, with the Samoa Family Health and Safety citing 46.4% of women between the ages of 15 – 49 experiencing some form of physical, emotional or sexual violence by an intimate partner.

Yesterday’s seminar focused on engaging with the topic in a new way, by suggesting approaching the topic of domestic violence before aggression occurs.

Seminar organiser, Steven Percival is enthusiastic about similar future programs such as community dialogue workshops within villages that will hopefully lead to a reduction in violence.

“A lot of initiatives are focused on dealing with the incident and post-incident phases of an explosive angry situation, but this phase is pre-incident. This is where people can recognise anxiety and begin to navigate that minefield before it becomes an angry outburst,” Mr Percival told the Samoa Observer.

“This problem is as much a Samoan problem as it is a Canadian, an Australian and an American problem. It’s a global pandemic we’re dealing with.”

But the team assured the seminar guests that the model they were providing was very much based on Samoan culture and custom.

“This model shows that much of what makes up our culture, if we actually go back and do that we’ll be a much better society,” Mr Agaiava states.

“For example when I was growing up we had evening prayers. And we came together as a family; there was a sense of unity, a sense of community, a sense of togetherness and it gives people a chance to talk about their day. The model we’re providing today is basically just that. We’re giving them a way to become more mindful, to reduce anxiety and stress levels and become more peaceful people.”

He also mentioned the role language plays in the resistance to human rights campaigns in Samoa. “People have become oppositional to the concept because we literally translate the words from English to Samoan, whereas there are actually more culturally appropriate topics.”

He says that it is important to reframe themes in a way that Samoan people can more clearly identify with and to address issues through Samoan language and Samoan values.

This week the team will set up community dialogue workshops at the village level right across Samoa, starting in Savai’i this Thursday and Friday. 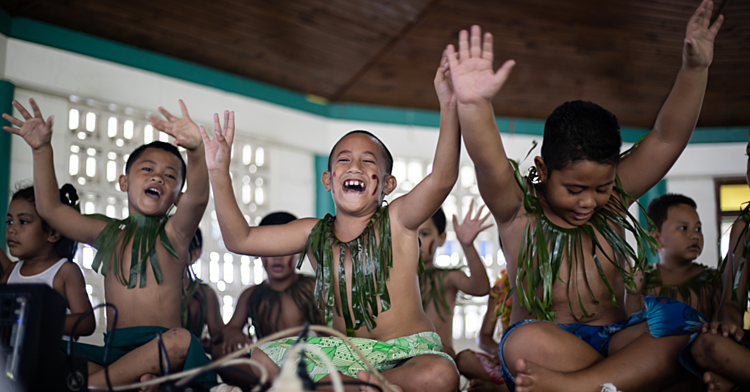