Seven arrests were made following the raid at Fasioo uta and Faleatiu (Photo: Aufa'i Areta Areta)

The Samoa Police Service seized guns, drugs, and ammunition, and money in a pre-dawn raid in Fasitoo uta and Faleatiu on Monday.

According to Police and Prisons Commissioner, Fuiavailiili Egon Keil, fifteen Police cars including a Fire and Emergency Services Authority (F.E.S.A.) vehicle and about 60 police officers took part in the tactical plan that started as early as 3 am Monday. 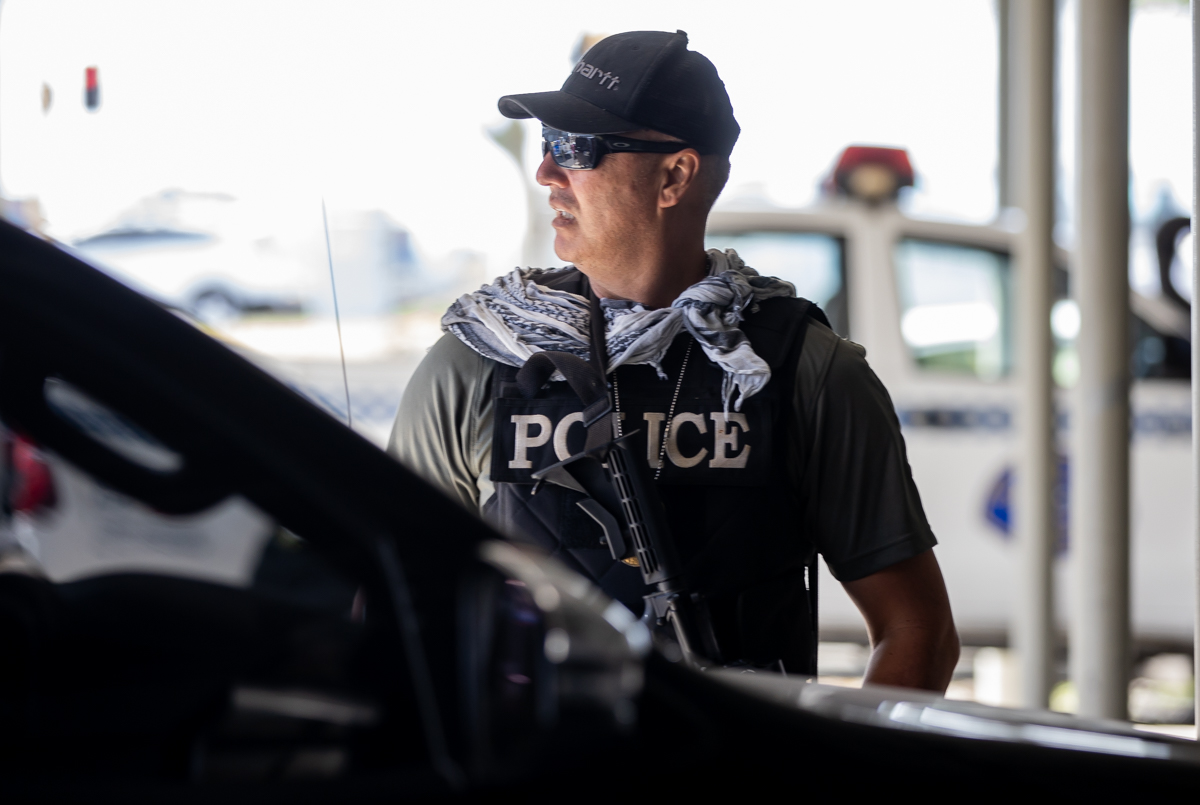 At one location children were seen rushing to flush drugs down the toilet as they saw the approaching officers.

Seven arrests were made, including three women who will be facing charges including the cultivation, possession, and distribution of marijuana, possession of illegal firearms, and ammunition amongst others.

“These are familiar faces amongst those arrests,” said Fuiavailiili.

“Some of these individuals, all they do is narcotics; marijuana, methamphetamine, cocaine and we have seen all of it. But once you mix hard drugs and these guns, it gets very dangerous.” 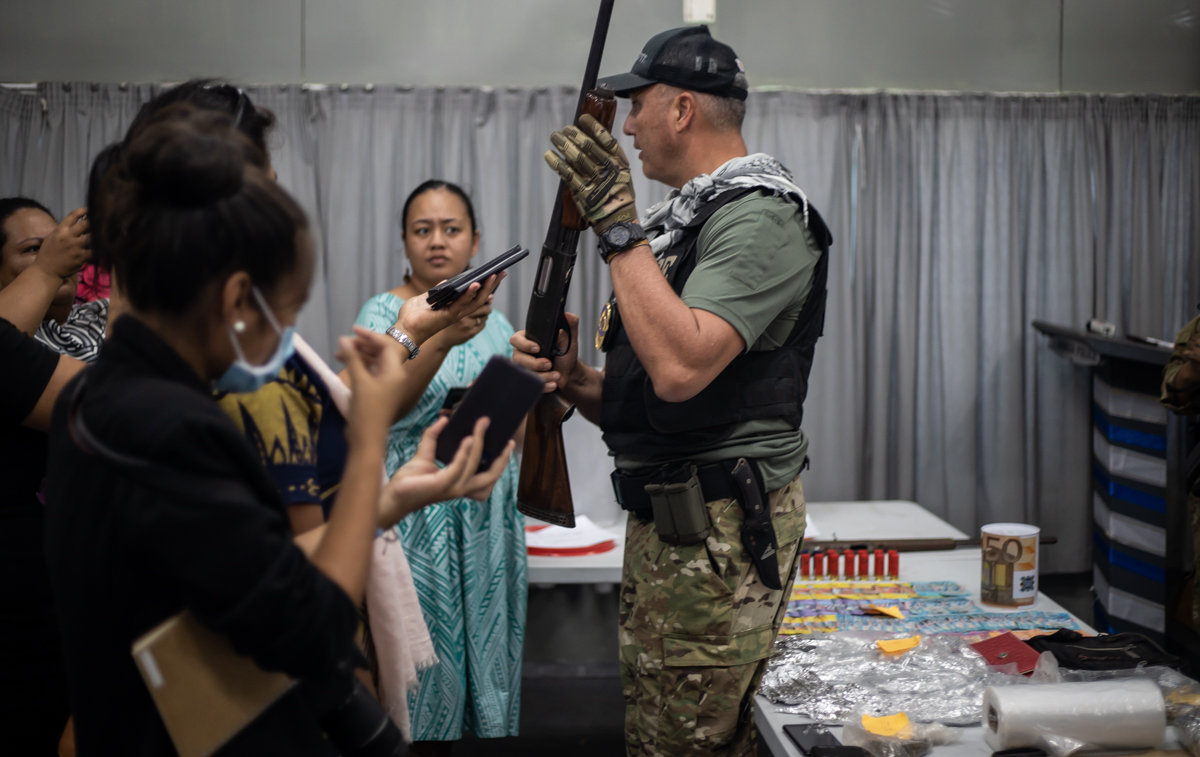 Fuiavailiili said the plantation they raided at Fasitoo uta is not new, however, is emerging fast as more people learn about it.

The team returned to their Apia Headquarters on Beach Road at 2.30 pm with a total of 1054 marijuana plants worth $160,000 alone, excluding three buckets full of the dried branches totalling 1,916.

Among the seized items were 457 bundles of marijuana rollups ready for sale and many baby marijuana plants still in pots.

Other items seized in the raid include money, utensils for smoking methamphetamine, many scissors, cellphones, laptops, two shotguns including an unlicensed “perfectly working” 12 gauge shotgun and ammunition.

Money in the form of notes and coins totalled up to some $2,000. 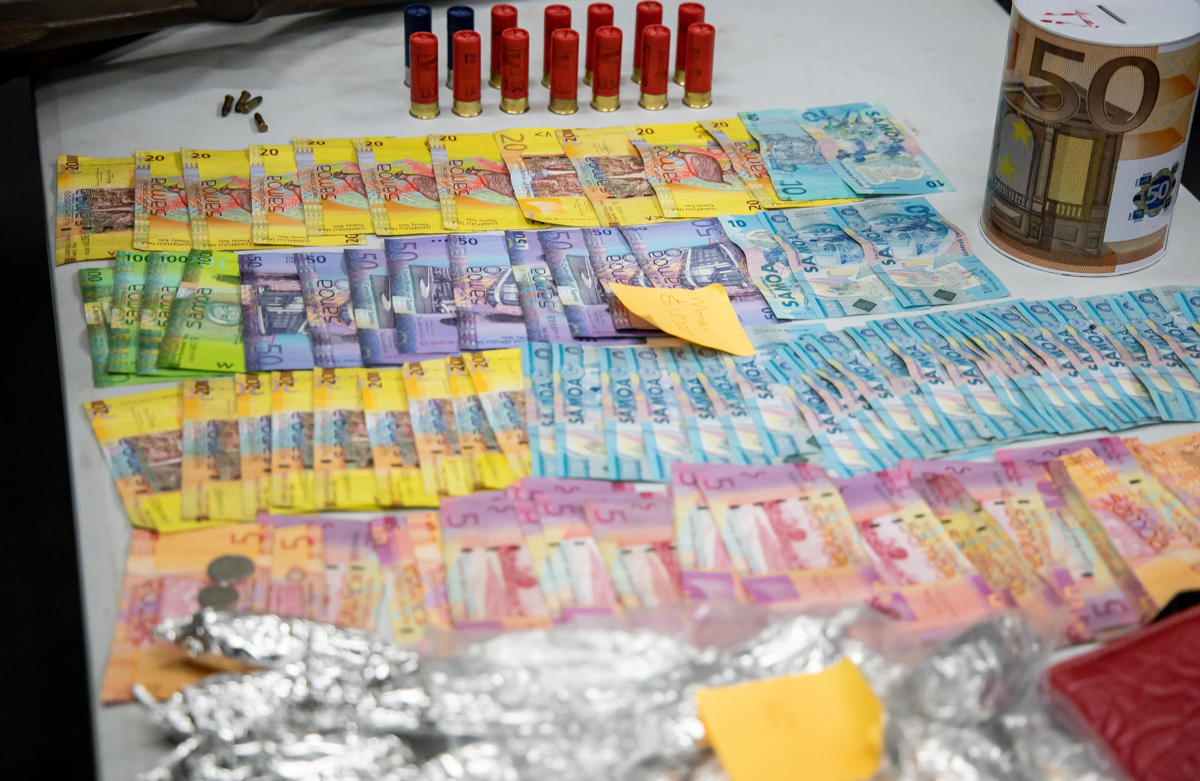 “We have received so many reports of selling marijuana up in those areas as well as shootings to intimidate civilians and so we couldn’t wait any longer but to do something,” said Fuiavailiili.

“We had a search warrant and we did a tactical plan involving about 60 police officers and 15 cars.”

Fuiavailiili noted that during their raid in Faleatiu today, they saw fewer efforts to replant the drug up there.

“The plantations we have raided before, we just went around there again looking if they have started replanting more, but there aren’t any more marijuana for the most part up there [Faleatiu],” he said. 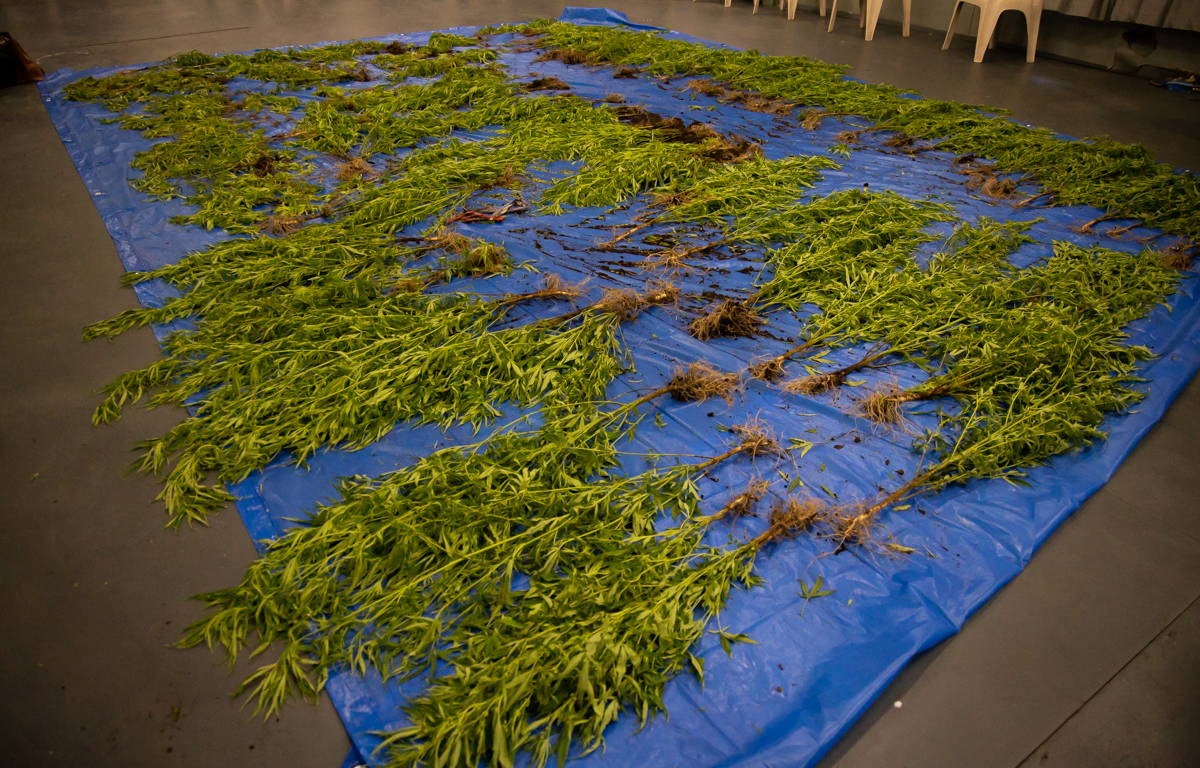 “But they have moved further [inland] and we used our drones as well and walked up there and it is very difficult but we were determined to get up there.

“And just to make a plantation up there, you have got to be very determined, you must be making some good money and that’s where we got these.

“And at the homes of those who were arrested, we found rollups (pulu), wrapped and ready for sale, and if you see on the other side, you see what we’re getting at Faleatiu, all the way up, we got utensils used for smoking methamphetamine.”

“But we see that efforts have moved to Fasitoo uta to cultivate plantations and who knows where else these are at,” he said.

“So while the Police are very busy with its other services, the Police do not rest in ensuring that our families and children are safe because others who operate marijuana syndicates are users of methamphetamine [ice].

“Now we’re finding out that there’s some ice up there in Faleatiu, plus guns. So to keep our families and friends in Samoa, the Police continue to do this amongst many other things.” 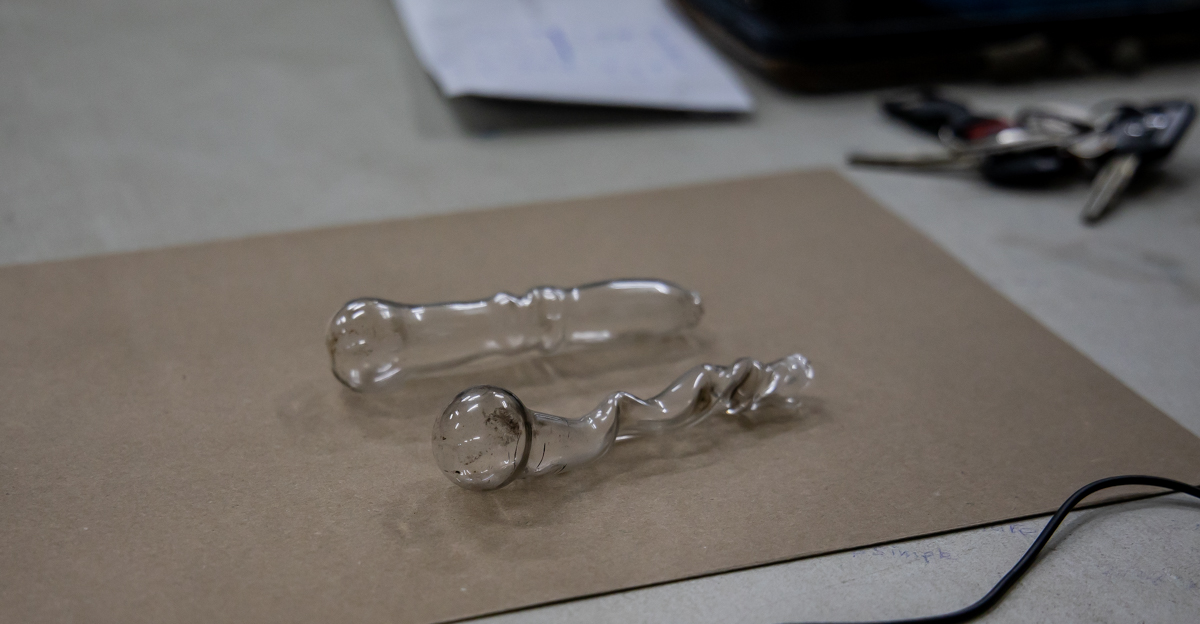 He continued to thank the members of the public and villages for their assistance, especially his team, including those who were ready to go at 3 a.m. as well as those who stayed to coordinate behind the scenes. He also acknowledged the support of the F.E.S.A. who stood by to ensure there was a medic nearby.

The Commissioner again issued a reminder that whilst some look at marijuana and think of quick money, marijuana is illegal in Samoa.

“There are some people out there who think [marijuana] is harmless, maybe so, maybe not, I don’t know; the only thing is that in Samoa, it is illegal,” said Fuiavailiili. 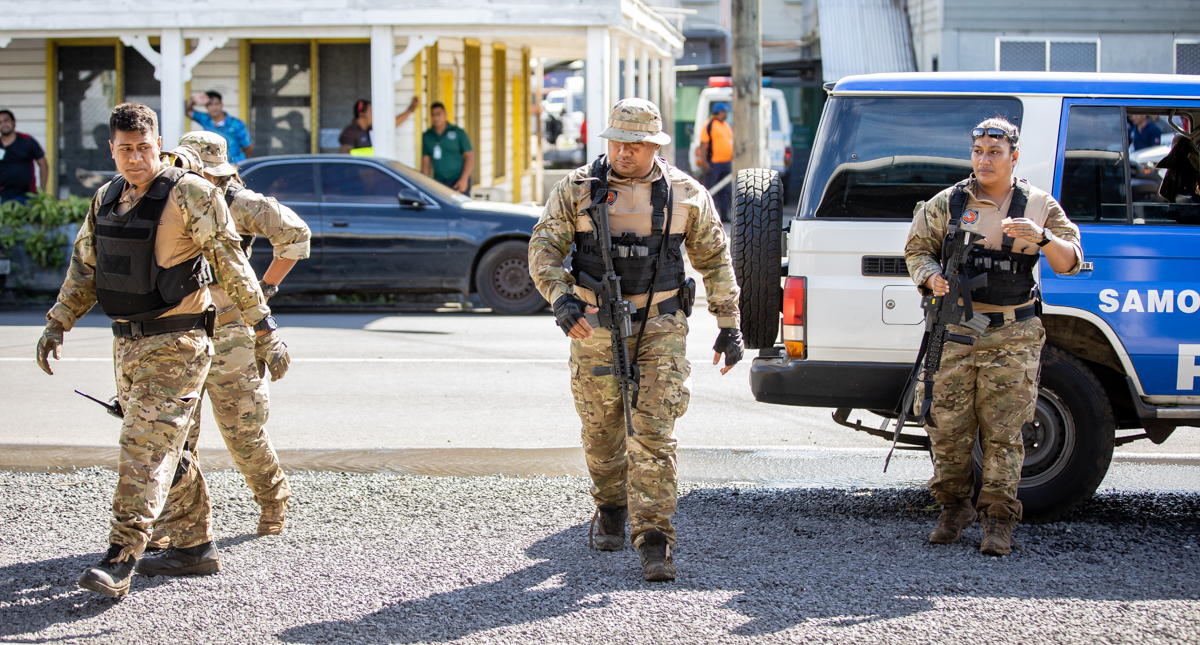 “Doesn’t matter what I think and what people think, in Samoa marijuana is illegal and as long as it is illegal, we will continue to do our work.

"It is not the whole of Faleatiu and Satapuala, even Fasitoo Uta who are doing this, there are so many good people there but there are a few who continue to do this for fast money.

"Instead of planting cabbage and taro, they plant marijuana. But once you do this, you are running the risk of getting locked up, charged and maybe go to Tanumalala prison.

"So if you're involved in something like this or maybe a casual user and you think it's okay, you're running a risk of getting locked up."