Unasa Iuni Sapolu and a group of protesters piuctured at the courthouse on Wednesday. (Photo: Aufa'i Areta Areta)

Protesters gathered at the Mulinuu courthouse on Wednesday morning to condemn what they described as a hijacking of the rule of law following an order to revoke the results of last month's elections.

The leader of the Samoa First Party and lawyer Unasa Iuni Sapolu, who led the protests, said the snap election call effectively undermined an ongoing court case that could resolve a 26-seat draw between the parties. She alleged the decision was politically instigated to undermine the legal process that would have likely determined the Government of the day.

The group that also had several teenagers waved around banners saying “[Head of State] we are not fools” and “We are equal under the law” written in Samoan.

In an interview, Unasa called upon her legal colleagues to stand up for their constitutional rights.

She also urged lawyers to help “our people that are confused” about the kerfuffle.

“I’ll be short of my obligation as a lawyer if I just sit back and do nothing,” said Unasa in tears.

“This is communist and clearly ignorance of the law.

“F.A.S.T. is the rightful Government of the day but they have used their trickery and manipulation to make sure no one else can rise above…” 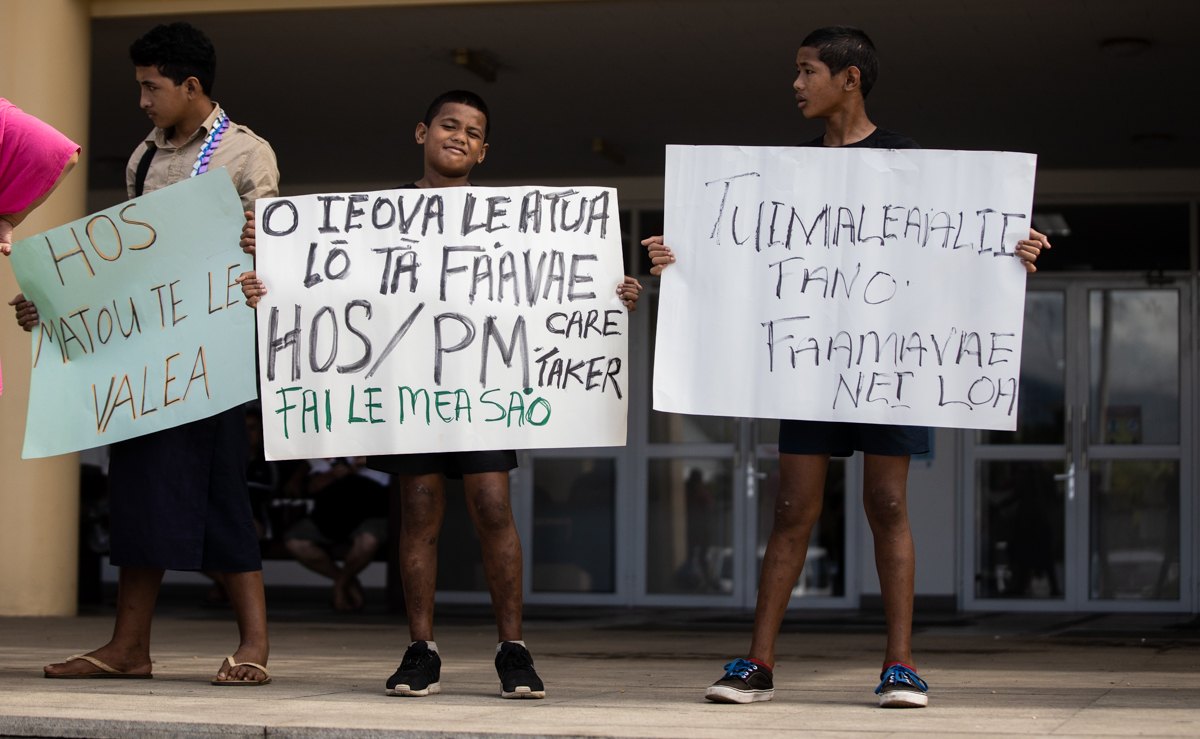 Unasa said she would support the call for a fresh election if the proper process was followed.

That process, she said, is allowing the Court to determine the case that is pending until a further decision is made.

“Personally the fresh election call is illegal, unlawful, and made in ugly faith.”

A young protester at the peaceful march, Sootino Autagavaia missed school to join the group.

“I wanted to miss school so I can be part of this and understand my constitutional rights,” she said the college student.

“This is not right and people need to stand up for their rights…I now know the dirty dealings behind these events.”

The peaceful march was conducted while matters pitching the Fa’atuatua ile Atua Samoa ua Tasi (F.A.S.T.) party against the Electoral Commissioner were underway in Court.

Caretaker Prime Minister, Tuilaepa Dr. Sailele Malielegaoi had acknowledged the Head of State for consulting him and Fiame Naomi Mata’afa about his intention for a fresh election.

Tuilaepa said he was unaware of what the Head of State would decide as the party leaders were told to inform His Highness later on Tuesday about their position in the matter.

Accordingly, he said the H.R.P.P. caucus had agreed to support whatever the Head of State will decide.

Furthermore, he said he was shocked with an announcement made by Fiame prior to that from the Head of State broadcasting their decision to reject the fresh election call.