There was heavy security and screening outside the Courtrooms on Thursday as proceedings on the electoral challenge were called (Photo: Vaitogi A. Matafeo)

The change in courtroom entry policy, in an area where the general public freely walk in and out of courtrooms without the hassle of a metal detector, was new for a lot of visitors on Thursday.

The new screening process was specifically for those attending the electoral challenge scheduled before the court.

Uniformed police informed the public that the court hearing the electoral challenge has ordered that electronic devices are prohibited from being taken inside the courtroom.

A metal detector was used to search individuals that headed to attend the brief challenge proceedings that lasted no more than 20 minutes.

Media representatives who applied to use voice recorders were granted permission to use them but on the condition that the court hearing is not live-stream and the gadgets should be placed on the media bench.

The lawyers were exempt and free to pass through without having to go through the metal detector checks.

The challenges were filed by the Fa’atuatua i le Atua ua Tasi (F.A.S.T.) party against Ali'imalemanu Alofa Tu’uau and Peseta Vaifou Tevagaena.

The party filed a motion for declaratory orders to declare the warrant on the additional seat awarded to Ali’imalemanu unconstitutional and void the seat of Peseta Vaifou Tevagaena. 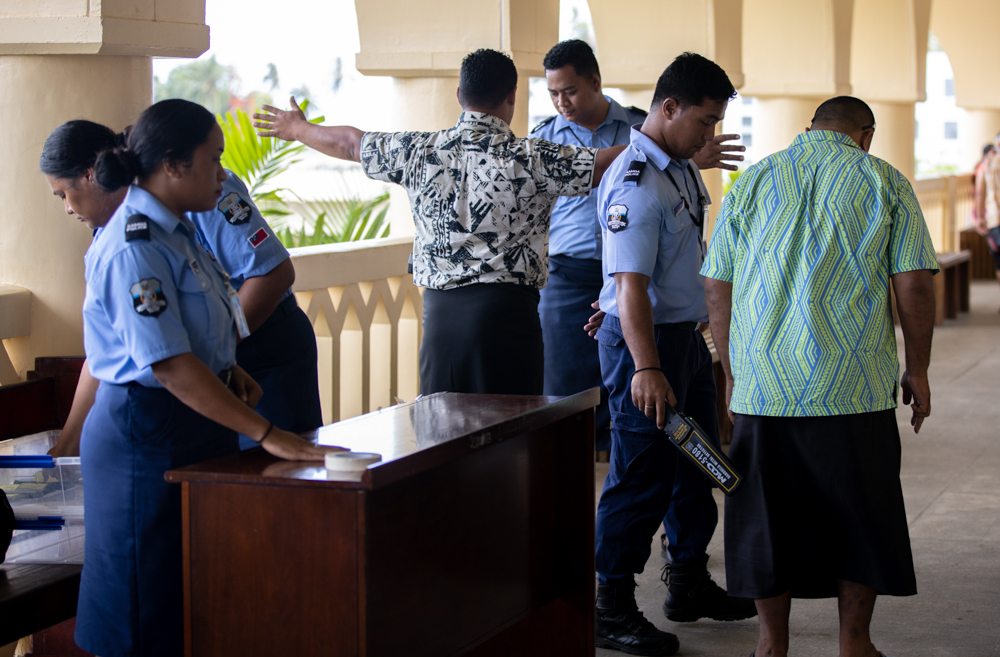 The proceedings didn’t start without a few hurdles in the courtroom, before the session officially commenced.

A media representative was asked by a senior police officer to vacate the press bench as her name was not on the approved list.

He was referring to a letter signed by the Ministry of Justice Courts and Administration, Chief Executive Officer, Moliei Simi Vaai on “application for in-court media coverage”.

The content of the letter referred to the Acting Chief Justice granting the media’s application on the condition that there is no live streaming only recording of the proceedings.

All recording devices excluding laptops were to be placed on a media table where the media sits.

The senior officer told the media that the instructions given to him is that only those who had their names listed on the letter were allowed to cover the case.

A senior journalist Autagavaia Tipi Autagavaia then advised the officer that the letter was intended for recording only and there is no restriction on media representatives sitting in an open court.

The matter was later resolved.