A well known British educationist in Samoa over a period of almost 50 years, the late Charles Richard Dick Bishop (Pisupo) was honoured and laid to rest on Thursday. (Photo: Vaitogi A. Matafeo)

Commonly known in Samoa as “Dick Bishop” with the Samoan name “Pisupo", he passed away at the age of 95 at the Tupua Tamasese Meaole National Hospital last Friday.

The funeral service of the late teacher and school principal was held at the All Saints Anglican Church, Leififi. 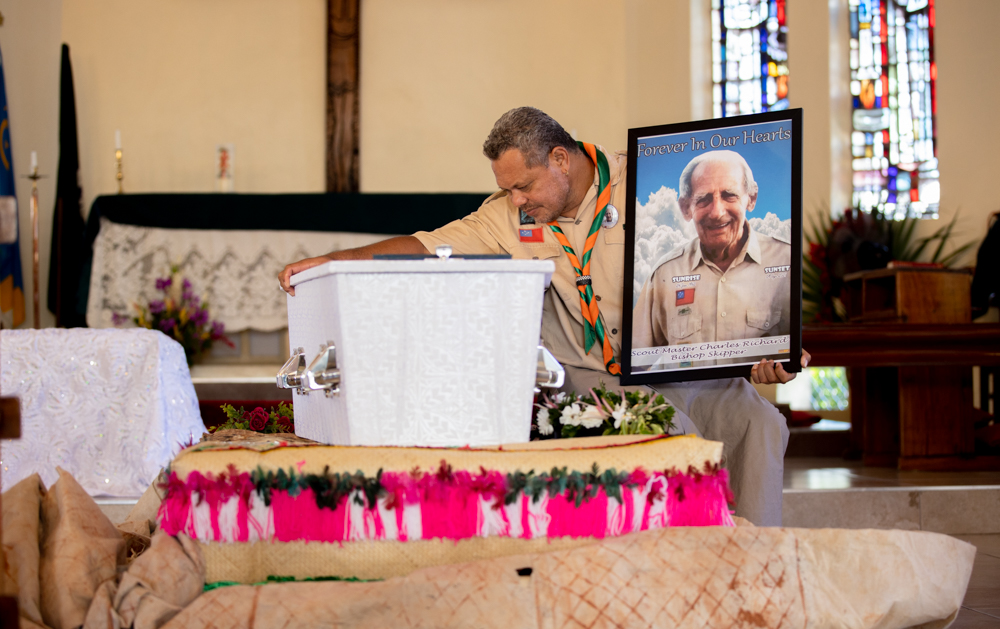 The Head of State, His Highness, Tuimaleali'ifano Va'aletoa Sualauvi II; the caretaker Minister of Works Transport and Infrastructure, Papalii Niko Lee Hang; the British High Commissioner to Samoa, David Ward; and the Police and Prisons Commissioner, Fuiavaili'ili Egon Keil was among those who attended the service.

Representing the caretaker Government at the funeral service, Papalii presented the Samoan flag to a representative of the Anglican Scouts in honor of Bishop’s service in Samoa. 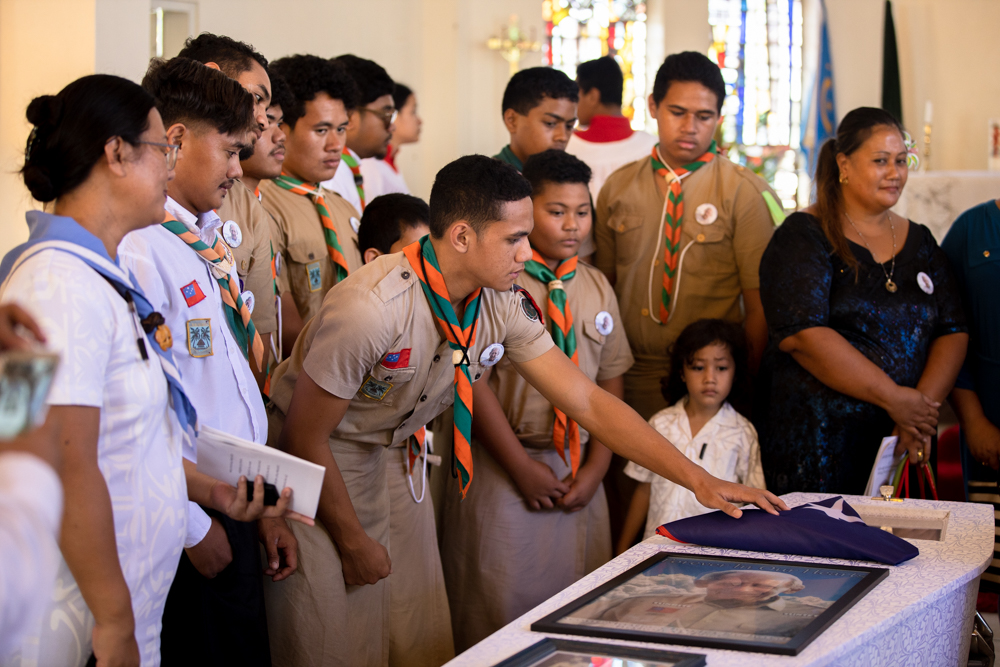 “We are gathered here to pay tribute to the life of a dedicated and hardworking servant of the Lord,” said the caretaker Minister.

“His milestone accomplishments in his service to Samoa culminated in the conferring of the government of Samoa’s esteemed award – the Samoa Certificate of Excellence in 1993, in honour of his contribution and achievements in education and youth development in Samoa. “On behalf of the [caretaker] Government of Samoa, we acknowledge with utmost gratitude and appreciation – Mr. Bishop’s service to our nation and our people. 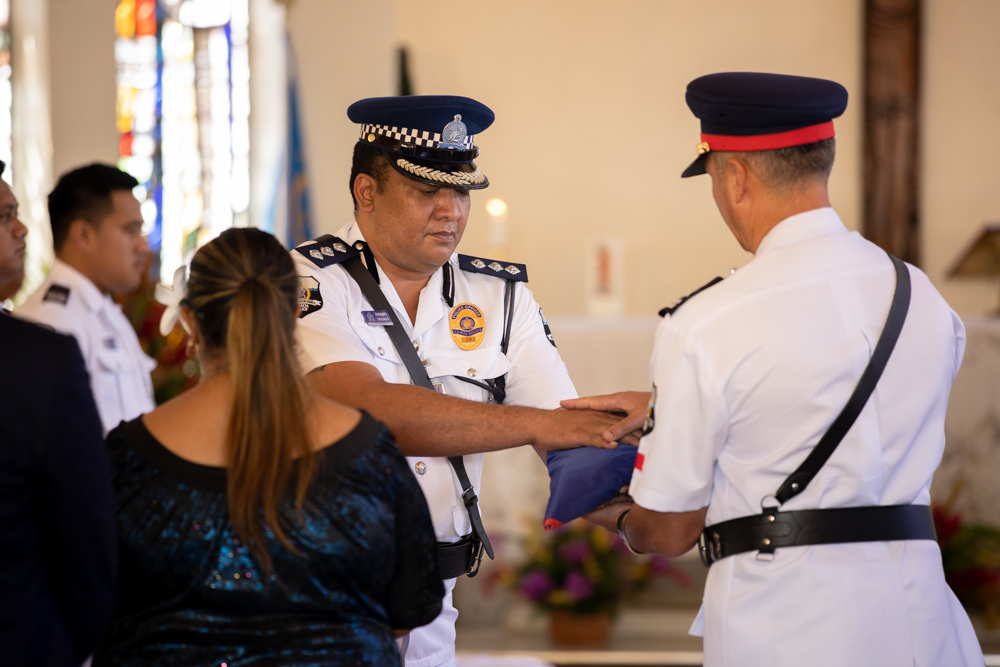 “He lived life to the fullest, he poured out his heart to serve, he nurtured, taught, and mentored, and he accomplished and led many lives to do good for the country.”

Papalii added that Bishop’s contribution to the development of the country in the field of education, and his commitment to equipping and grooming the youth through the Anglican Scout movement in Samoa, were immense and was a lifelong influence for many. 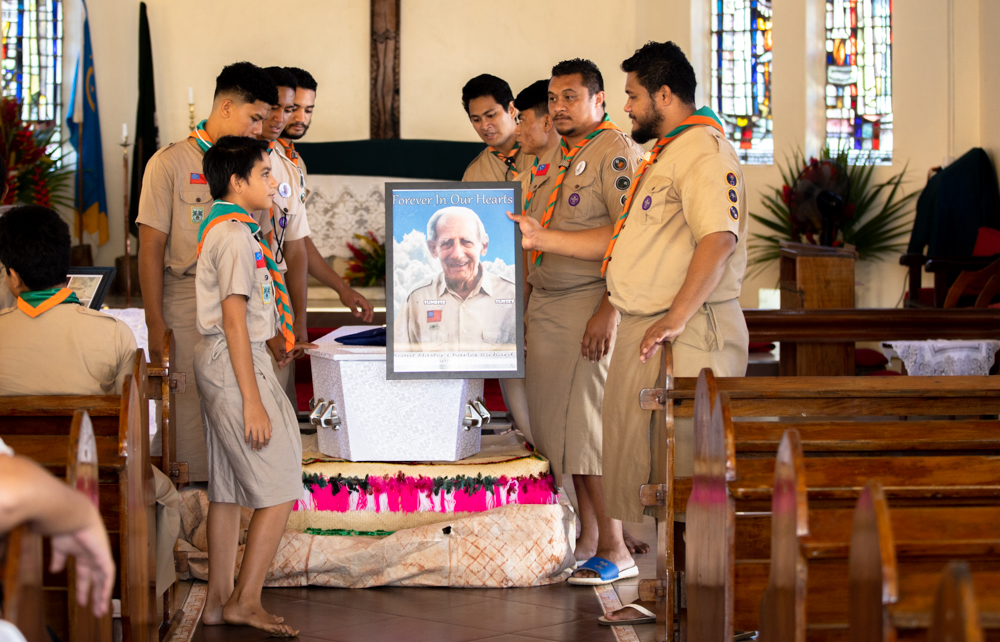 A former Anglican Scouts member who was with Bishop during his last days, Pei Viliamu Falasii, said that he was like a father to him.

“During our last conversation he said to me ‘I pray that God will bless you always’.”

Speaking during the eulogy at the funeral service, another former Anglican Scouts member, Royce Taualapini said Bishop had a passion for education.

“The development of students, that’s why he turned out to be an educator. I have known him for more than 20 years,” he later said in an interview with this newspaper. 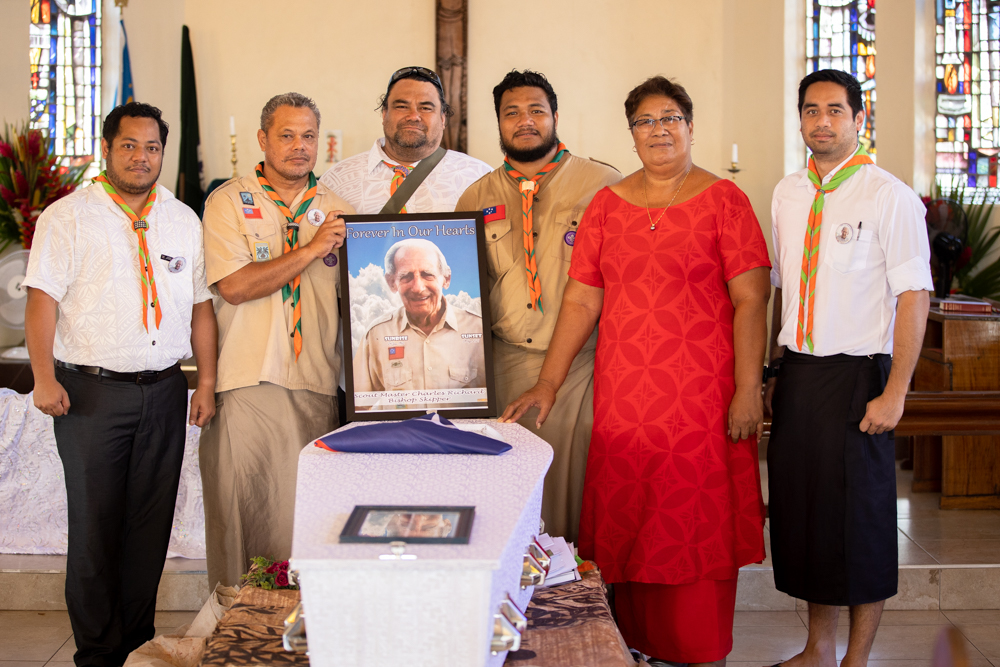 “He taught me a lot of things, such as your approach to issues or problems. His favourite words to me were your commitments, getting your priorities right.

“I am grateful for all the times we spent together.”

The British teacher, who later became a naturalised citizen of Samoa, first arrived on the shores of the country in 1953, having served in the British Army during World War II and was also a qualified meteorologist.

Mr Taualapini said having arrived in Samoa, Bishop became an assistant teacher in Apia Primary’s Form 1 and Form 2 classes from 1953 to 1955 and his students including Samoa’s former attorney general Neroni Slade.

"Bishop said that at the time he had Neroni Slade, William Schwalger and others as his students,” said Mr Taualapini. 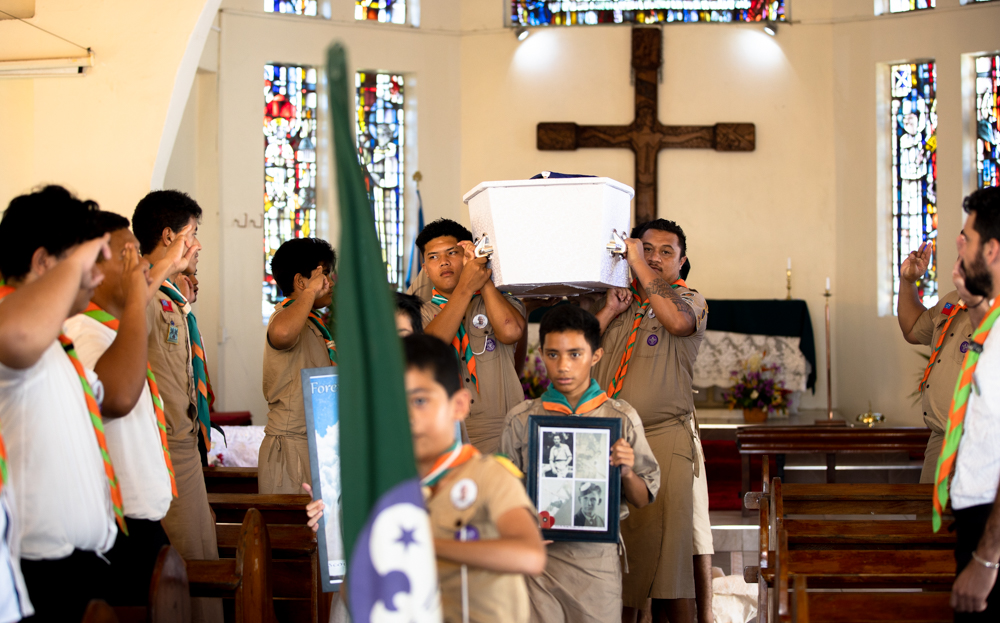 “It was the first time that 70 per cent of the Form 1 and 2 levels passed the national exam in Apia Primary education history.

“It was the brightest of the bright that attended Apia Primary in those times."

In 1955 Bishop was affiliated with the Scouts as a sea scout trainer and also assisted Felix Davit with the coordination of the movement, to later take on the leadership role when Mr Davit for Savaii.

A year later he travelled to New Zealand and flew back to the United Kingdom, but was soon on his way back to Samoa according to Mr Taualapini.

“But he came back immediately, in his own words ‘he missed the kids so much that he wanted to come back’ so he flew back here.

“He was hired back by the Ministry of Education on his return and was made officer in charge for the intermediate education in Samoa for three years under the leadership of director of education at the time. 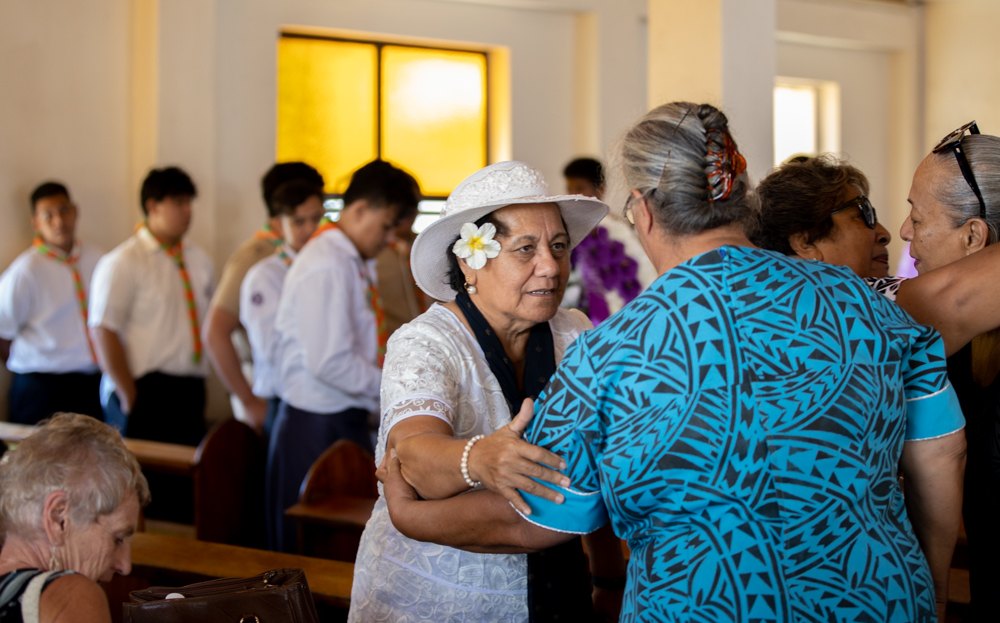 "From 1956-1957: the first palagi to ever worked with district schools as a district schools inspector and had lived among the families at the time when out in the communities visiting schools.

“He even travelled to Savaii as an inspector, and visited schools on a motorcycle.”

In 1959 Bishop he was the acting principal for Avele College for a year as an english principal, and Faulalo Sagapolutele as a Samoan principal.

Mr Taualapini said he then ended up at the Samoa College which was when the government introduced reforms to upgrade the college.

“From 1960 – 1962 he was a senior teacher for the intermediate department at Samoa College under the leadership of Principal Gordon at the time,” he said. 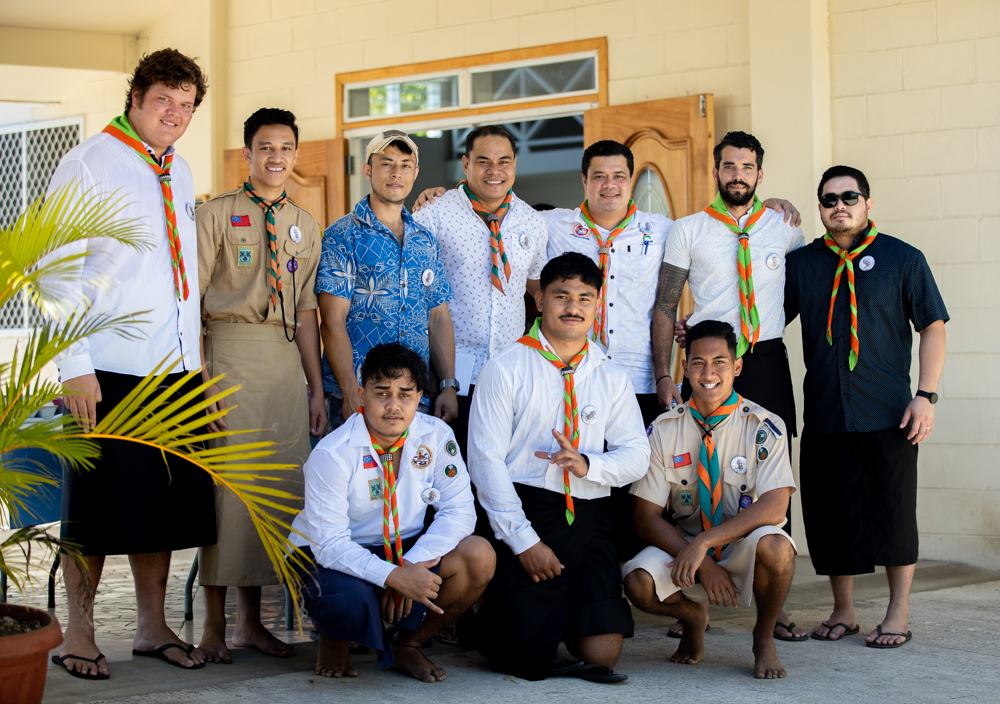 “It was during his time at Samoa College that the government decided to separate the intermediate level from the rest of the school and called it college which it is to this moment."

And it was at Leififi where Bishop clocked over a decade as the Principal of Leififi Intermediate School from 1962 to 1979 and then in 1980 he was appointed the deputy director of education for close to a year.

“He travelled to Tuvalu and even here and was tasked to integrate environmental programmes into social science, language and science subjects. 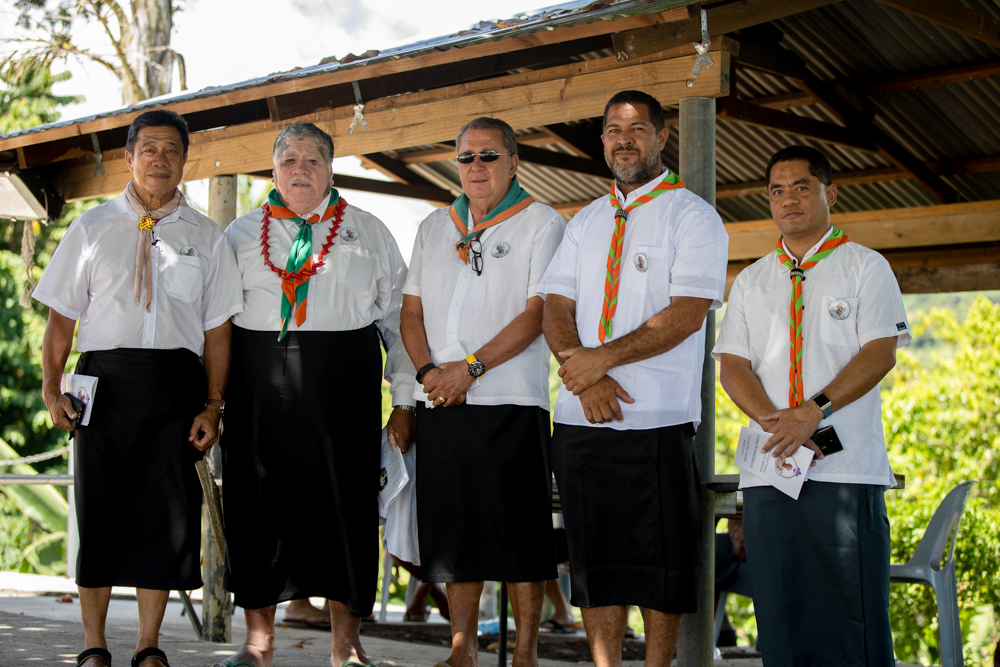 "In 1986, he served his second term in Samoa at U.S.P. Campus and later on retired on superannuation.

“At the time: Lisi Vaai became the Chairman of PSC after being a Principal of Leififi Intermediate.

“Whilst on superannuation, he was asked to assist convert Leififi Intermediate School into a Secondary School.”

In 1987 he assisted to set up the Robert Louis Stevenson School and became the first principal of the then new school.

“His first full retirement was in 2002 and only became a board member to the RLSS executive board until his last moments,” according to Mr Taualapini.

The body of the late Bishop got cremated on Thursday at Sefo Pa’u Funeral Parlor at Tafaigata in line with his wishes with the Anglican Scouts also hosting a memorial service for the late educationist on Friday.

Private remittances for March 2021 rose by $10 million to reach $51.1 million according the Central Bank of Samoa's “Visitor Earnings and Remittances Report March 2021” which was issued this week.

Telecommunications firm Vodafone Samoa has announced the winner of its "Upolu Car for the More For All Promotion” with a father of four walking off with a brand new car.