The O.E.C. Elections HQ at Tuanaimato will be the centre of operations for Samoa's 2021 General Elections (Photo: Aufa'i Areta Areta)
Politics

Samoa’s Electoral Commissioner says his office is “going overboard” to ensure that the integrity of elections are being protected at the highest level.

In an interview with the Samoa Observer, Electoral Commissioner Faimalomatumua Mathew Lemisio has admitted that much of the work undertaken by his office is tedious, but necessary, as preparations are being made in the final stretch before elections.

“We are probably 90 per cent complete, and the last 10 per cent will be next week [Monday],” said Faimalo. 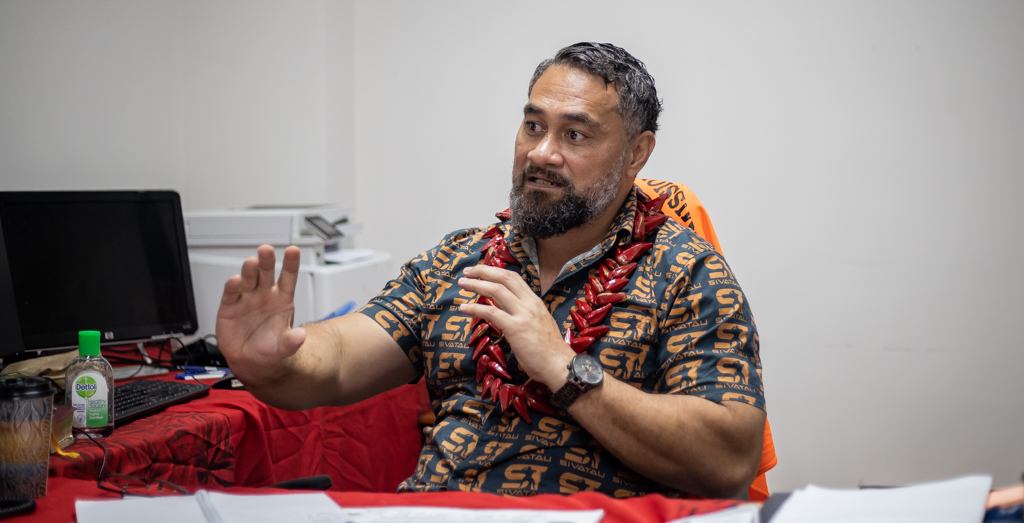 “We’ve done all the training for scrutineers, for polling officials, now we’re focusing on getting all the ballot stations sorted for pre-polling.”

The Commissioner said they have been preparing for elections since 2016; developing a strategic plan for work that has unfolded over the last five years.

Part of that was the introduction of pre-polling.

The new initiative allows for specific groups of voters such as those in essential services, persons with disabilities, those travelling the week before elections, and the elderly aged 65 years and over to cast their votes ahead of the General Elections on 9 April.

Registration forms had been made freely available to the public from last year, but were stopped in February this year due to worries over their misuse.

“You saw those three people who were charged. The intention of the form was to make sure it reaches maximum members of the public, to get people involved,” said the Commissioner.

Police charges were eventually filed last week against three people affiliated with a political party who have been accused of forgery in relation to pre-polling registration forms.

An incredulous Faimalo said he was disappointed at what happened.

“Look at what they did. It cost us a lot of money and put our plans four weeks behind because we had to engage the whole team to go out. But these are the challenges we have to go through.

He said that even though their backs were against the wall, he feels it was the right decision to send teams out to complete registrations for pre-polling.

“It’s a good thing we found out earlier, so we made the hard call to stop it there, and allow our team to go out.

“Sitting here now, looking back at that decision, I think it was the best decision we made under the circumstances.”

The Commissioner confirmed that pre-polling stations will open from 9am until 4pm, Monday to Thursday.

Once closed, a preliminary count immediately takes place under the watchful eye of candidates' scrutineers.

“We have asked candidates to ensure that they have their scrutineers sitting throughout the process. We need them to scrutinize the process, witness the [preliminary] counts."

He said it was important that scrutineers do their part for transparency. They are encouraged to ask questions and check ballot boxes, to avoid mistrust.

“Like the allegation that the ballot boxes have compartments at the bottom – it’s crazy that people would react to these kinds of allegations, and not just the civilians but political leaders too. By doing so, they are validating that nonsense.”

“It’s like we’re exhausting all these avenues to try and eliminate all the possibilities of people spreading misinformation but they aren’t utilizing it.”

He went on to say one of the key moments of the elections is at the beginning, before polling, where the presiding officer will open a ballot box and show it to scrutineers to confirm there are no ballot papers placed inside, prior to votes being cast.

“These are the tedious processes we have to go through to ensure that the integrity of our elections are being protected at the highest level.”

A breakdown of the pre-polling process includes a 4pm preliminary count in front of scrutineers, with ballots placed in special envelopes allocated to each candidate.

“We tally and put them in the envelope. We don’t put the ballots back in the box. 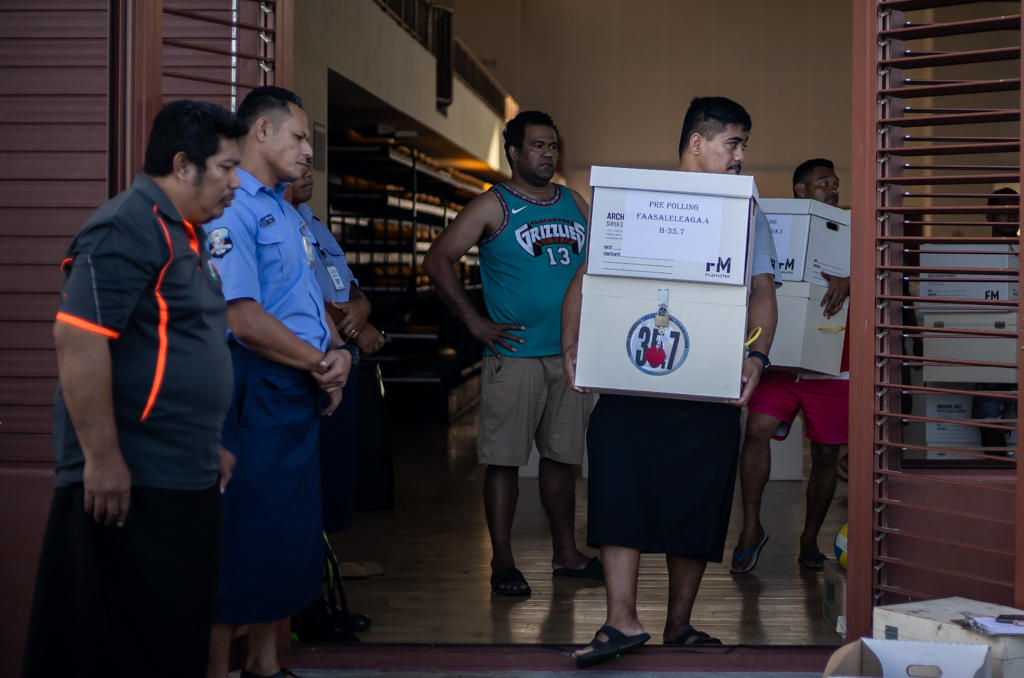 He admitted that they are going overboard with security, but it was by design.

“The only time we ever open those sealed envelopes is when we come to do the final count, and that’s here [O.E.C. Election Headquarters in the Multipurpose Stadium at Tuanaimato] in front of scrutineers, they get to assess the whole process.

“The officials count the ballots in front of the scrutineers and they get to see who has been voted for, one by one.”

On the question of privacy for voters, the Commissioner is adamant that there is no way anyone can know who a voter has chosen on their election ballot.

Faimalo confirmed that aside from the electoral rolls that list the names of all voters, there is no way you can be identified, adding that there are no forms or ballots that ask you to write your name or indicate who you are.

“The secrecy of voting is paramount under the law,” he said.

Once you have entered the polling station and you have been identified on the roll, your name is crossed off the list. A new system being used for this election, Votecaster, will help the O.E.C. to identify a voter quickly, said the Commissioner.

“We have a system now where a person comes in, we type in their details like date of birth, then a profile pops up – even their roll number – then that person is checked against their photo and once the official is sure that this is the right person, they then cross them off the roll. 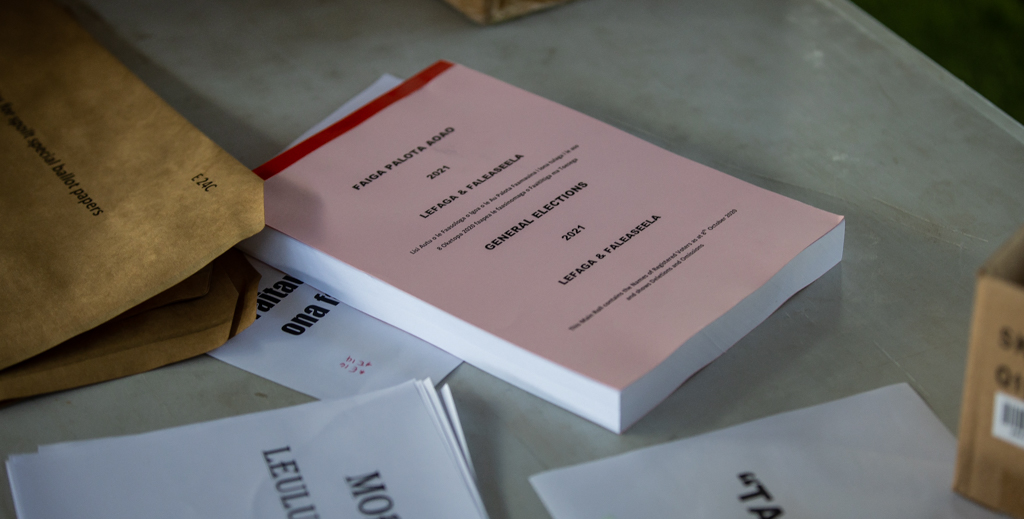 From there, you take a generic ballot paper and cast your vote for your chosen candidate before leaving the polling area.

“The roll we use for these elections is destroyed eventually. Once the final count has been done, everything is handed over to the Court [Ministry of Justice and Courts Administration] and then after 12 months, everything has to be destroyed.”

In clarifying the voting process, he said that while there are no more special voting booths, the special vote is still there.

“Out of necessity, because we can’t have polling officials allocated to a booth from within their own place of voting, for example, you can’t place someone [as an official] from Vaimauga within the Vaimauga district. Because of the conflict. So we have to take them somewhere else, and from there, they should cast their vote. So that is a special vote.”

Others identified as special voters under the law include those working in essential services, those in shelters and those in hospital.

Faimalo said aside from the preliminary count, these special votes are only counted on Saturday, the day after General Elections.

He also confirmed that a Final Count will be on Saturday, as it would be impossible to complete on Friday.

“The whole process is really transparent… we’ve been to other countries and the way we do it, it’s extremely controlled.

“Once [preliminary] results are all out, we have to wait until the boxes get back to the Election Headquarters and at that time, the whole place is under custody of Police.

“We are placing our trust in the Police. It will be under 24 hour surveillance.

“Even at the police stations, where the pre-polling boxes will be kept in custody [during the week] it will be under 24 hour surveillance.”

The Commissioner confirmed that he met with Police Commissioner Fuiavailiili Egon Keil and his team to discuss the operations and systems to be used.

“We’ve seen the systems, we’ve met with Egon and his team, they can monitor everything from Apia. They also have teams monitoring, 24 hours.”

With more than 100 locations for pre-polling, and 430 locations (an increase of almost 200 from last elections) for Friday’s General Election, Faimalo said in addition to his O.E.C. team, about 2300 officials will be deployed.

“There are so many polling booths in all constituencies, so there is no excuse for voters not to vote.”

The Commissioner confessed that at one point, he doubted the decision to allow pre-polling.

“When the political games started up, questioning the pre-polling option, it actually crossed my mind whether this was a good idea or not.

“So one Saturday I took a team out in the field and we visited families.

“Every elderly person I spoke to said thank you, and appreciated being given the option.

“That confirmed for me that it was the right thing to do."

He said for some, they appreciated that they wouldn't have to stand in lines because it is uncomfortable or difficult for them.

“We want our elections to be free, fair and inclusive."

Faimalo said the O.E.C. has translated their Act in to Braille and made sure all polling booths are wheelchair accessible.

“We have a healthy relationship with NOLA [Nuanua o le Alofa] who have shared data with us regarding locations of those who use wheelchairs so we can make sure we have a polling station that can be accessible for them."

On challenges in preparation for the biggest day on the O.E.C. calendar, misinformation being spread online has come to dominate much of the political discussions for the voting public. 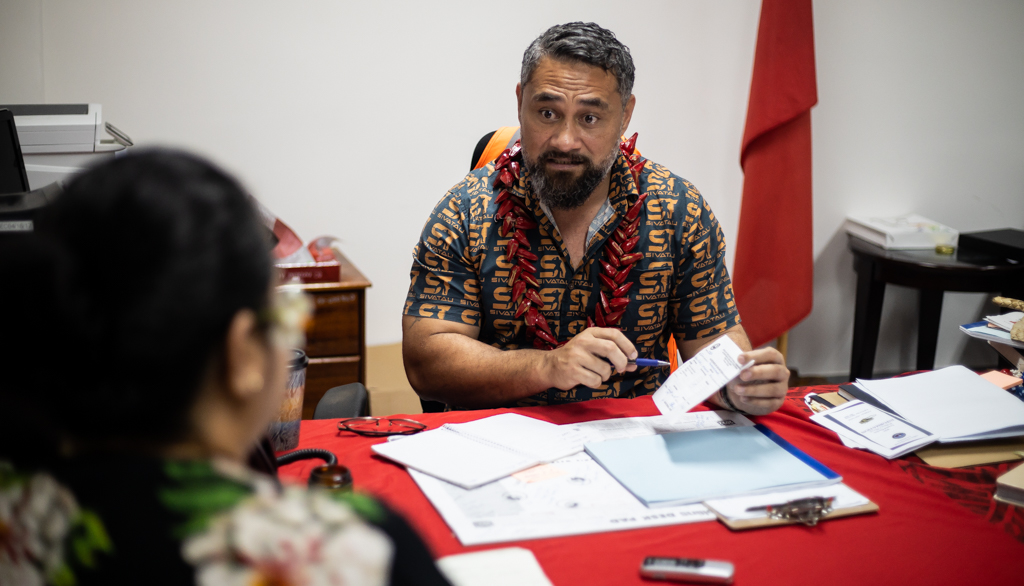 Social media has played a huge party in the dissemination of information, and Faimalo said the O.E.C has tapped in the power of Facebook to battle misinformation.

“We are now in direct contact with Facebook. They’re pretty big on integrity of elections… they’ve probably realized from past experiences on their platform..”

He said a team will assemble at the O.E.C. on Monday who are working on identifying all the laws that could possibly be violated by content or users on Facebook.

“Facebook has opened a special channel for us, where we can contact them directly with the content and they will deal with it. They will also have a taskforce, available 24 hours, for Samoa’s elections.”

The Commissioner said the partnership with the global social media juggernaut would go a long way towards ensuring the integrity of elections.

He said there had been discussions surrounding a block on Facebook during the election period, but there was legal advice about that option being unconstitutional.

“Those people who hide behind fake pages, be accountable.

The Facebook-O.E.C. partnership is an exclusive deal, as confirmed by Faimalo.

When asked if Facebook were going to work with the Government, he said no.

“It has to come through us, we assess it, and then we accelerate it through that channel.”

“Let’s have a fair election. All these tricks happening, I’m urging candidates… everything has to stop – advertising, Facebook," he said.

The Electoral Commissioner said he had an important message for the public, and that was to dispel any misconceptions that his office is pro-Human Rights Protection Party.

“Our office is often seen as pro-H.R.P.P. The fact is, we are employees of the government of the day.

“We are called to do a job – to ensure the electoral process is fair.”

As to why he felt the need to share his message, Faimalo said he cared about comments being made because it undermines the O.E.C.

“When we start making decisions, there are no personal affiliations that come in to it.”

Adding yet another voice to the current political debate, the Tautua Samoa party has urged the Faatuatua i le Atua Samoa ua Tasi (F.A.S.T.) party to honor their “discussion and agreement to partner after election”. 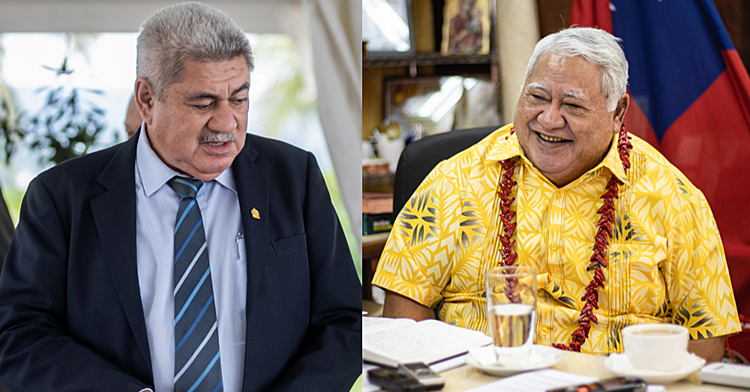