The family of Tiapili Gaono Tusani-Moe'ai and Tapuitea Sa'eu from Falealupo-Tai are still fielding questions and seeking answers about a rock they say fell from the sky and onto their property.

In an interview with the Samoa Observer at Tapaua, Falealupo-Tai on Wednesday, Tapuitea said they are seeking answers and are hoping someone could explain where the rock came from.

Reflecting back on 3 February, the day when the unusual event took place, Tapu'itea who was not at home at the time said she was "shocked" when she got home and saw the rock. 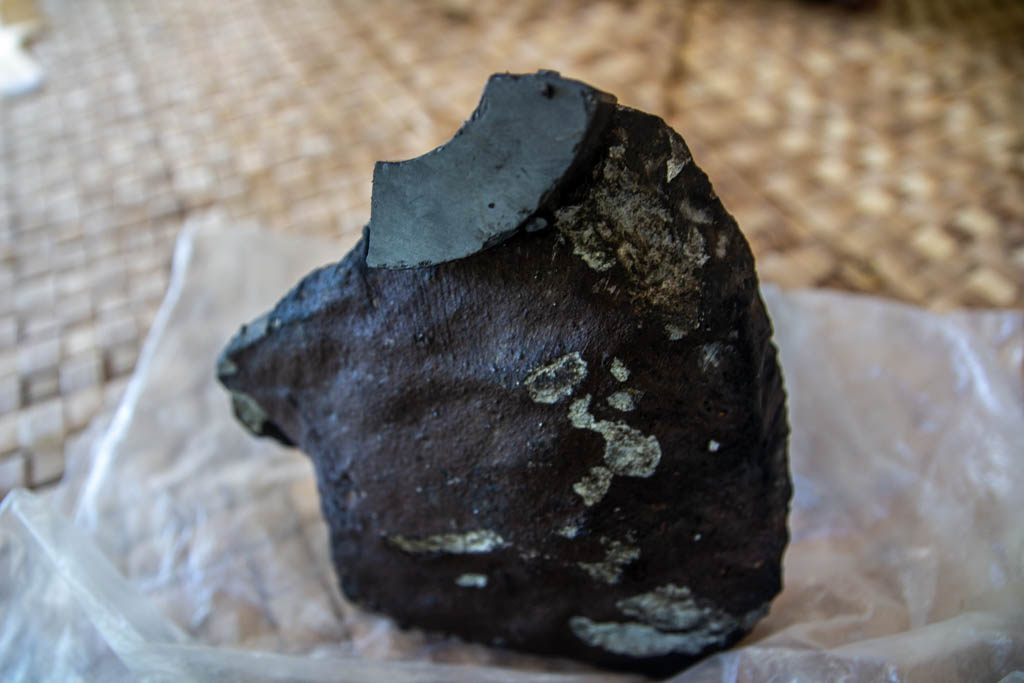 "My husband (Tiapili Gaono Tusani-Moe'ai) was here at home with another matai from our village," Tapuitea told the Samoa Observer.

"The head of this family is a mechanic so they were trying to fix our car that day while I was at school waiting for my daughter to finish school so we can come back home. 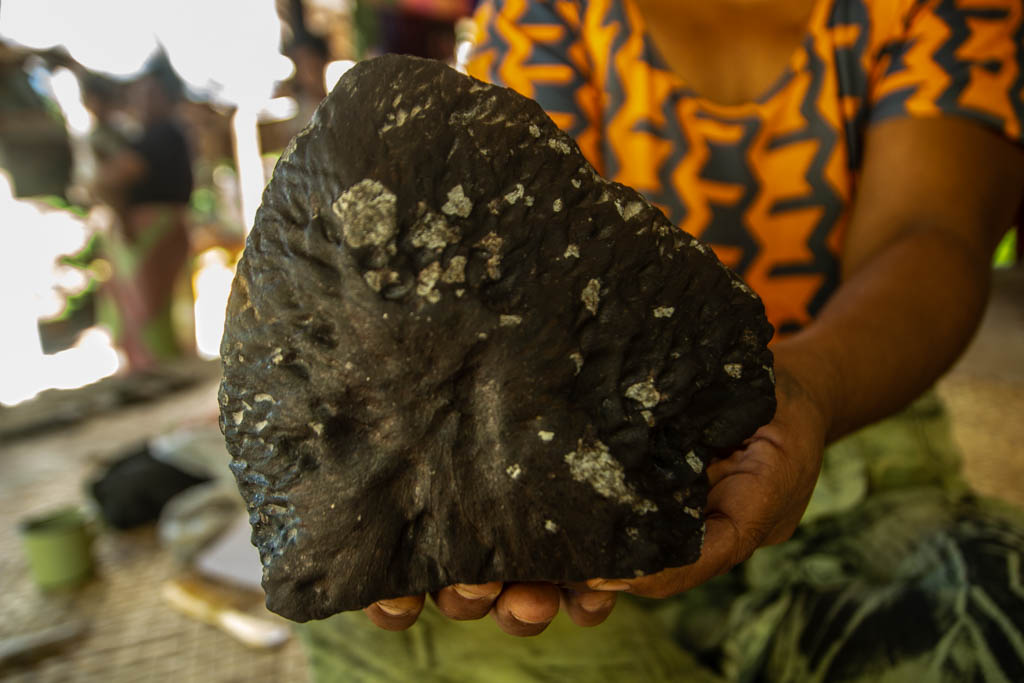 "I did hear an unusual sound from the school compound. It was a rumbling sound; it sounded like thunder, but it was not. I did not pay attention to it until I got home.

"We got home that day and I saw the rock, and I was shocked because it was the first time I've seen such a rock. It looked different and not like the normal rocks we have around our house."

Tapuitea then questioned her husband, Tiapili, who relayed the events of the day.

"My husband said he also didn't expect what happened. After that rumbling sound, there was a big dark cloud in the sky as if it was about to rain, but they continued working on the car,” she recalls.

"Then they heard a loud bang and they dropped what they were holding and ran under the coconut tree in front of our house, thinking it might've been a plane that has crashed and about to fall down to our house. 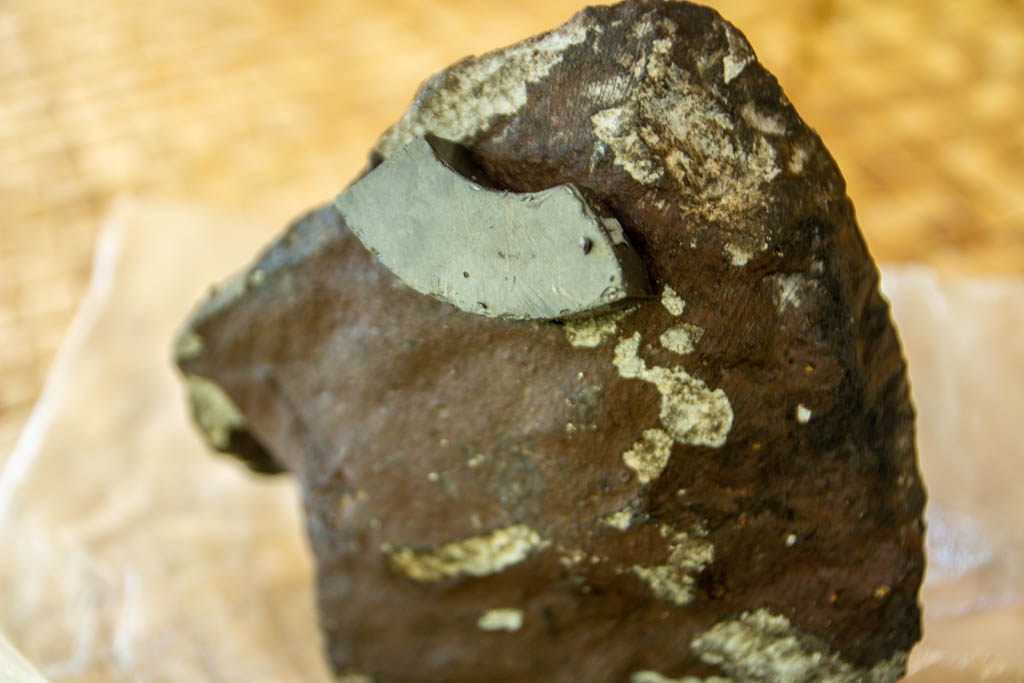 "However, they saw the rock fall onto the stacks of rocks in front of our house and dust was coming from where it landed. So they quickly ran to see what it was and saw that the rock that fell from above cracked some lava rocks, while the rock itself remains intact.

"But the rock was said to have ricocheted across the street and landed on the road not far from the stacks of rocks it fell onto.

"The rock may look small, but it's really heavy. My husband said it was as cold as ice when they first retrieved the rock."

The triangular-shaped stone has become the object of public curiosity on Facebook where skepticism about its origin story has also made it the butt of several jokes.

When asked if they are willing to take the rock for research to find out where the rock could possibly come from, Tapu'itea said: "We have been told that the people at S.R.O.S. (Scientific Research Organisation of Samoa) have been notified about the rock and we are waiting for them to come. 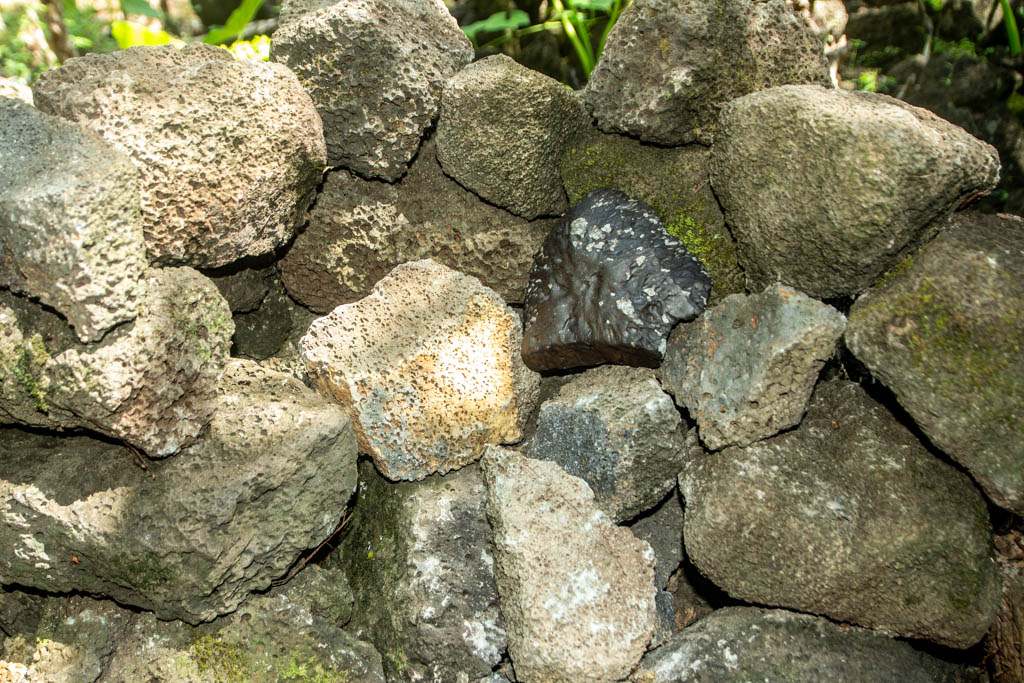 "We also want to find answers about where the rock came from and what type of rock it is.

"As you can see, if you put a magnet closer to the rock, it will stick on the rock. It gets shiny if you take it out in the sun. That is something unusual and we want to find out what it is and where it comes from."

The family has been hosting a lot of people not only from around Savai'i but also from Upolu wanting to see the rock and have their photos taken with the rock.

"Since I posted a video with the rock on Facebook, people have been visiting our house and home wanting to see the rock. Some even suggested that we take it to a scientist, while others have suggested that we keep it in a museum," Tapu'itea said.

"Others have reached out to us and said that the rock might be a blessing and could be worth millions of tala. 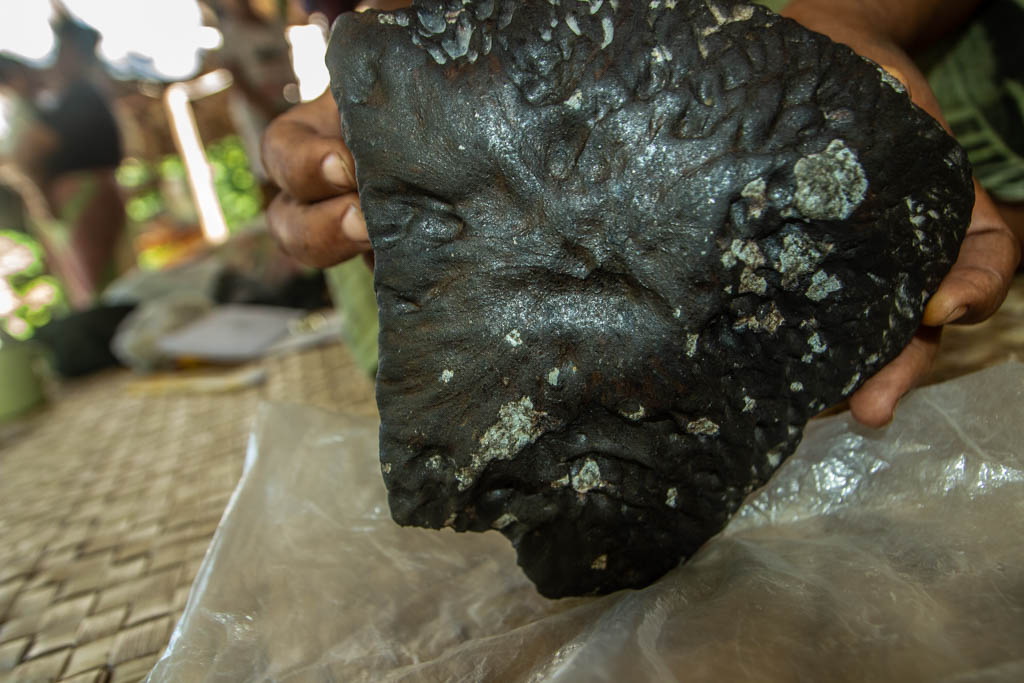 "But to me, I have no intention of selling the rock. Even if someone comes with a thousand tala, I will not sell the rock as it is rare and unique.

"I know this is worth more than a million so we will keep finding answers and we will give this to the right people to examine the rock."

When told of a 91-year-old Australian geologist who is interested in examining the rock, Tapuitea said she would be delighted to take the rock to expert geologist Warren Jopling.

"I know Warren and I am sure he remembers my husband, so if he is interested in examining the rock, then we would be happy to see him,” Tapu'itea said.

Mr. Jopling told the Samoa Observer earlier this week that he “is quite interested” in seeing the rock to determine its composition.

He said it is highly possible that rock could be a fragment of a falling star (meteorite).

“Quite frequently, rocks do fall from the sky. You have what you call falling stars. It especially occurs at night. If you look at the heavens, you’ll see one or two very quick streaks,” Mr. Jopling explained.

“The thing of it is that by the time they get through the atmosphere they are pretty much burnt up. On occasion, there will be one which will come to the earth, mainly formed by the explosion of a star usually.”

The Australian geologist has lived in Samoa for 37 years, first heard of the Falealupo rock when questioned by the Samoa Observer earlier this week.

Rocks most prevalent in Samoa are basalt, said Mr. Jopling.

But meteorites, or falling stars, are composed of iron.

“I would certainly like to see the rock. Volcanic rocks around Samoa, the hard ones, they are basalt...meteorites are made of iron so the weight is considerably greater than basalt,” Mr. Jopling said.

A trip to Falealupo would be difficult for the 91-year-old due to health issues, but he says he is hopeful someone can transport the rock to his home at the Safua Hotel for closer inspection.

“I don’t move very much. Is it possible that someone can pick it up and bring it here? It could be a little meteorite but as for being cold, I am not too sure about that. I would like to see it,” said Mr. Jopling.

“I have been thinking about the temperature of this rock and they say it was very, very cold and that is possible.

"A meteorite would burn up when it is passing through the ozone layer - that’s a layer in the stratosphere that filters out all the ultraviolet rays,” Mr. Jopling explained.

“The atmosphere, the stratosphere cools going upwards when [if it was] a falling star...there probably would be time for it to cool down and become quite cold so I am really interested to see this so I can tell whether it is basalt or iron.”