Callum Jones is remembered by those he coached as a kind, supportive man. (Photo: Aufa'i Areta Areta)

Mr. Jones, who had been battling an illness for two years, passed away in Nelson, New Zealand in November.

Ms. Apelu, who is still in New Zealand after joining her husband in October, told the Samoa Observer Mr. Jones’ health, and strength and conditioning knowledge was immense.

“Callum was a visionary, really. His knowledge and study was far advanced of your normal, run of the mill practitioner,” she said.

Mr. Jones first came to Samoa in 2007 to work with the Samoa Rugby Union (now Lakapi Samoa) and its High Performance Unit as the Strength and Conditioning Trainer.

He was employed full time there until 2008, when he returned to New Zealand to get ready to move to Samoa and build his life here, after owning and operating his own gym in Wellington.

Since then he has worked with nearly every sport in Samoa. He supported cricket clubs, the soccer federation, netball, the rugby academy and worked alongside Ms. Apelu in her own sports organisation, Apelu Sports.

“I say with a lot of pride and sadness that the sports industry in Samoa has really lost out on that knowledge, now that he’s gone. We could have hugely benefited from it.

“It was just insane, the amount of projects he was helping out with.” 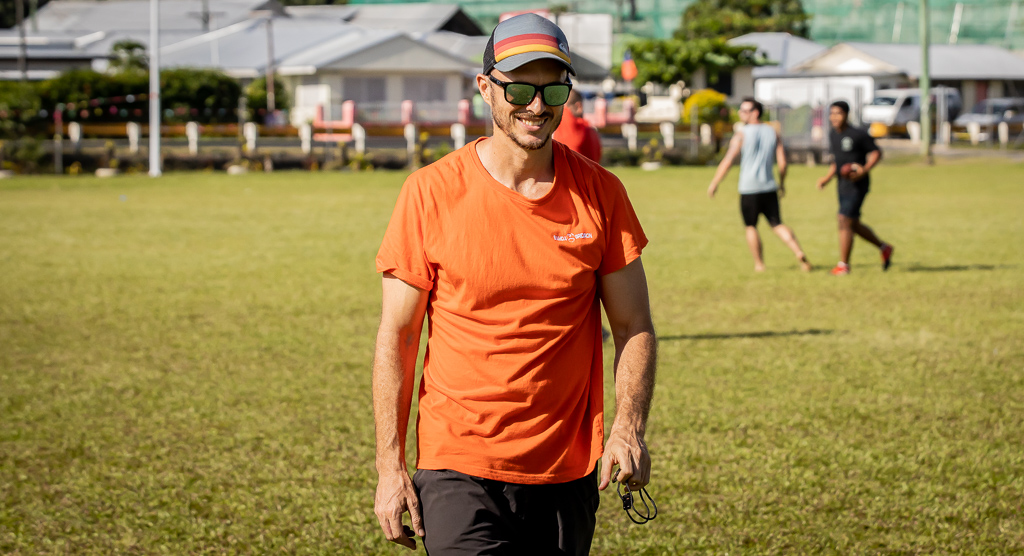 One of those programmes was Samoa Gridiron, which he joined alongside the late Agatupu Leafo. When Mr. Leafo unexpectedly passed away in July 2018, he took over the programme to deliver Coach Tupu’s dreams of helping young men into college scholarships.

And it was a success. In 2019 he took nine players on training camps to the United States, and eight were accepted into scholarship programmes (the ninth was too young).

“That was his driving force,” Ms. Apelu said. “Callum wanted to ensure the kids got the future they deserve and that they always talked about and worked hard for. It was really important to him to get those kids up and away.”

One of those scholarship winners is Carlos Keil, who studies at the College of the Sequoias (C.O.S.).

“He was a great man, he always looked after us and pushed us to work hard and try for the best. He was kind, he loved us all,” he told the Samoa Observer.

“He taught me to keep moving forward, every time I am about to give up he would push me to my limits. He helped us focus on what we want to do in life, especially playing football to help our families back in Samoa.”

Before joining the programme, Mr. Keil said he never imagined moving abroad to become a professional American football player. Now that it happened, he is not looking back and his family are hoping his siblings will follow suit, he said.

After Mr. Keil got his scholarship to C.O.S., the two stayed in touch for a while and the student shared his achievements with his former coach but as school and playing commitments grew, they fell out of touch, he said.

“I want to thank him for this opportunity, for him pushing us to achieve what we want.”

Another student, Ivan Kolone Vaai now at Cisco College in Texas said Mr. Jones was as good a coach in life as he was in sport.

“He wasn't an old man nor did he have a long white beard but man was he filled with wisdom and knowledge and I envied him for these,” he said.

“He had a genuine heart and he really did look out for us and didn't really didn't care for any personal gains.

“When we were in our tours and different camps, he coached us to becoming responsible men by giving us responsibilities and trusting that we would carry them out and if we didn't do them he would show us and demonstrate it for us.”

Another C.O.S student, Wesley Kamu, said Mr. Jones was like a father figure, best friend, and “one of the greatest guys.

“Coach Callum recruited me back in 2018 to come and try out for football and I was surprised that Samoa had a football team,” he said.

“He was an inspirational man that would not give up on anyone or even himself.

“If Callum would hear me now, I want to say thanks Coach. Thank you for the time and effort that you put into all of your students around Samoa. Don't worry, your spirit and teachings will forever live on through us and we will try our very best to make you proud.”

Ms. Apelu said she is still learning just how many lives her husband touched. Earlier this month his friends in Wellington hosted a memorial, where the number of people who arrived surprised her.

“Callum, as a teacher and a guide, for not only our family but everyone who came under his tutelage, he was committed and very caring.”

She said the way their two young children have been processing their father’s passing is a testament to Mr. Jones’ parenting and teaching.

Mr. Jones is survived by his wife Ms. Apelu and their two young children.