The nation’s finance chief has brushed off a recent historic drop in Samoa’s economy, saying he believes that the worst effects of the pandemic-led downturn are over.

A quarterly decline in the nation’s Gross Domestic Product (G.D.P.) of 16.3 per cent was reported for the September quarter of 2020 compared to the year prior, according to Government statistics released last week. The drop was the largest fall in the nation’s economy since quarterly economic records started being kept more than two decades ago.

But the Ministry of Finance’s Chief Executive Officer (C.E.O.), Leasiosiofa'asisina Oscar Malielegaoi, said he takes a longer view of the nation’s economic performance and believes the pandemic-led economic downturn has peaked.

"First of all, we are thinking very positively about this, because if you expect the economy to collapse, you will work towards that, [the same goes for] when you think of lifting the economy, then certainly that is the approach that we are taking," he said.

Leasiosio added that quarterly declines did not figure prominently in the Government’s decision making, which is based primarily on yearly statistics.

“"If you look at things per quarter, that is not right, because there is a quarter that goes up and another that goes down; what's important is the 12 months review," he said.

"Just like last year, the last financial year was when the measles [epidemic] and COVID-19 [global pandemic] occurred, but by the end of the year, all the projections from overseas and local agencies forecasted a 3.5 per cent final [estimate for negative growth while] we forecasted 3.3 per cent."

Leasiosio said that the near-alignment of the domestic and international projections proved the accuracy of Government forecasts.

The finance head said that the Government’s economic stimulus packages were front of mind for the Government steering the nation through a period of downturn.

"Instead of spending so much time thinking and worrying, it is better to use that time to push the development works which is why we had plans implemented in July, including [increasing the] pension, N.P.F. dividends and then [during] September [and] October, our $12 million National I.D. [scheme] was rolled out," he said.

"Our $150 million stimulus - that is a large injection into the economy.

“And while this does not guarantee a positive result, at least we know it is managed and the economy is controlled so it won't decline further."

The Government was seeking to do as much as possible to inject cash into the economy to provide an economic "buffer" to guard against a major "economic fallout", Leasiosio said.

But the Ministry’s C.E.O. drew the line at offering assistance for businesses that were damaged during flooding this week - the second instance of flash flooding in less than a month.

Leasiosio said that the Government was not in the business of providing handouts to disaster-struck businesses saying that doing so runs the risk of capturing them in a "debt trap".

The C.E.O. said that the only role of the Government is to empower the private sector, by creating opportunities.

"Remember, when the last flooding in December 18 hit, the people said to give money to the private sector,” he said.

“If we had set a [precedent] after that happened, then every time [disasters happen], even if we have a hundred floods, they will ask for handouts because we have gotten them used to it.

"As I have emphasised before: the Government does not give out money. The only thing is the Government helps create opportunities and create an enabling environment for businesses."

Leasiosio said that the Government is focused on repairing damaged infrastructure in areas struck by the flooding, such as the drainage system on Vaea Street, to help businesses keep operating.

Leasiosio reiterated that a "responsible" Government maintains that cash handouts do not help the businesses.

"We do give assistance when it is warranted, but not [after] each time something happens [should we be giving] cash, no," he said. 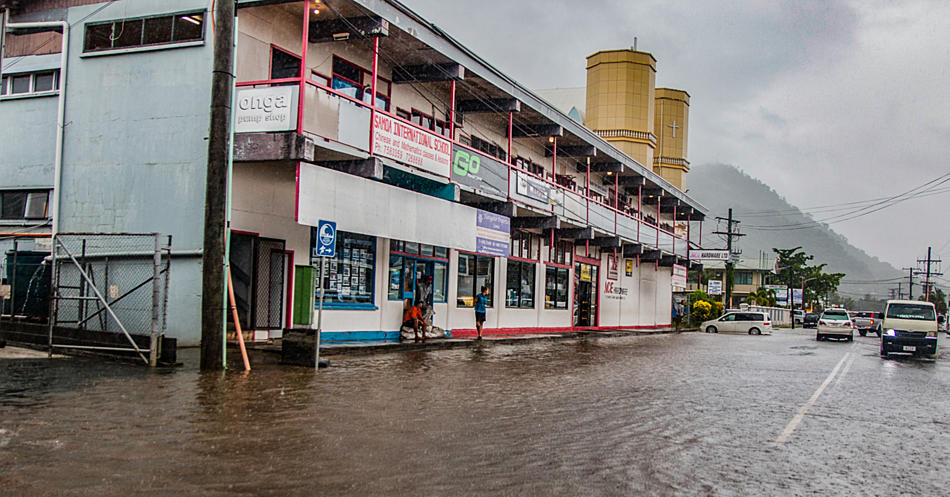 Leasiosio said the situation was similar to hotels asking for monetary assistance from Government.

He believes the Government has been generous with two stimulus packages released in response to COVID-19.

Assistance was provided through measures such as the reduction of loan interest rates to all commercial banks to the tune of $3.9 million among other subsidies for electricity and water bills for the private sector.

Another benefit that the C.E.O. noted was the assistance recently distributed for people whose employment was affected by COVID-19 restrictions.

To prove a point he referenced the many non-performing loans from some major hotels following the tsunami, as well as Cyclone Evan.

"After those incidents, the Government assisted them with good intention to not only improve their facilities but also help during the downturn at the time," he said.

"We have created a sort of debt trap for some of these hotels because we gave them the money with good intention but [it] cannot be paid back.

"And if we continue to follow these choruses that say give them some money, it means we give them more loans and we won't be helping them in actuality. It will only increase their loans when we all know there is no capacity to pay immediately."

Leasiosio compared the situation to how the Government steers the economy to improve families' standards of living.

"By lifting the standard of living of families, you need to take the kids to school because you can always give them money but they will forever remain in a low economic situation; education is the priority," he said.

"The only help we can give the less fortunate families put the children through school. But we see that the message is not reaching; the amount of children street vending is increasing when it should really be the parents that do that."

Leasiosio's analysis was contradicted by remarks made by Dr. Robert Kirkby, a macroeconomist with the Victoria University of Wellington, who suggested in an interview with the Samoa Observer on Monday that the  Government could do “more” to assist citizens impacted by economic downturn.

He contrasted the decrease in the Samoan Government's national debt with other economies in the region which had grown their debt levels in order to fund more extensive economic relief packages.