More than half of those who approach Pesega Records have plans to record themselves doing covers of other artists' music.

But music producer Uili Lafaele is instead encouraging Samoans to write their own lyrics and music.

For the holiday season, singers have been rushing to book an appointment with Lafaele to record covers of famous Christmas classics.

Most popular are time-honoured classics such as “Silent Night” and “Jingle Bells.”

Christmas tracks of various genres are being produced and released at the Pesega Records studio operated by Lafaele and his wife Epi Lafaele.

The studio is adjacent to their home where they live with their four children in Pesega, hence Uili’s DJ name Pesega Boy.

Pesega Boy’s studio is quite busy on the Saturday the Samoa Observer met him for an interview.

Upon arrival, a recording session was in progress and a familiar Samoan classic, Dave Parker’s “Tofa Lau Pele,” was being recorded in the neat and tidy and well-insulated soundproof studio.

Tasi Neemia of Vailima, a competitor in the Golden Star song competition hosted by TV1 Samoa, was recording the track for his Sunday evening performance the following day.

This newspaper learnt that Neemia is not the only artist who recorded his music at Pesega.

“A lot of the Golden Star singers come here to record their soundtracks,” said Uili.

Uili and singer and music producer Sam Choo Koon, who is also known as Mr. Cowboy, often work as a team to produce music at Pesega Records. Christmas has been keeping them busy aside from their usual music recordings. 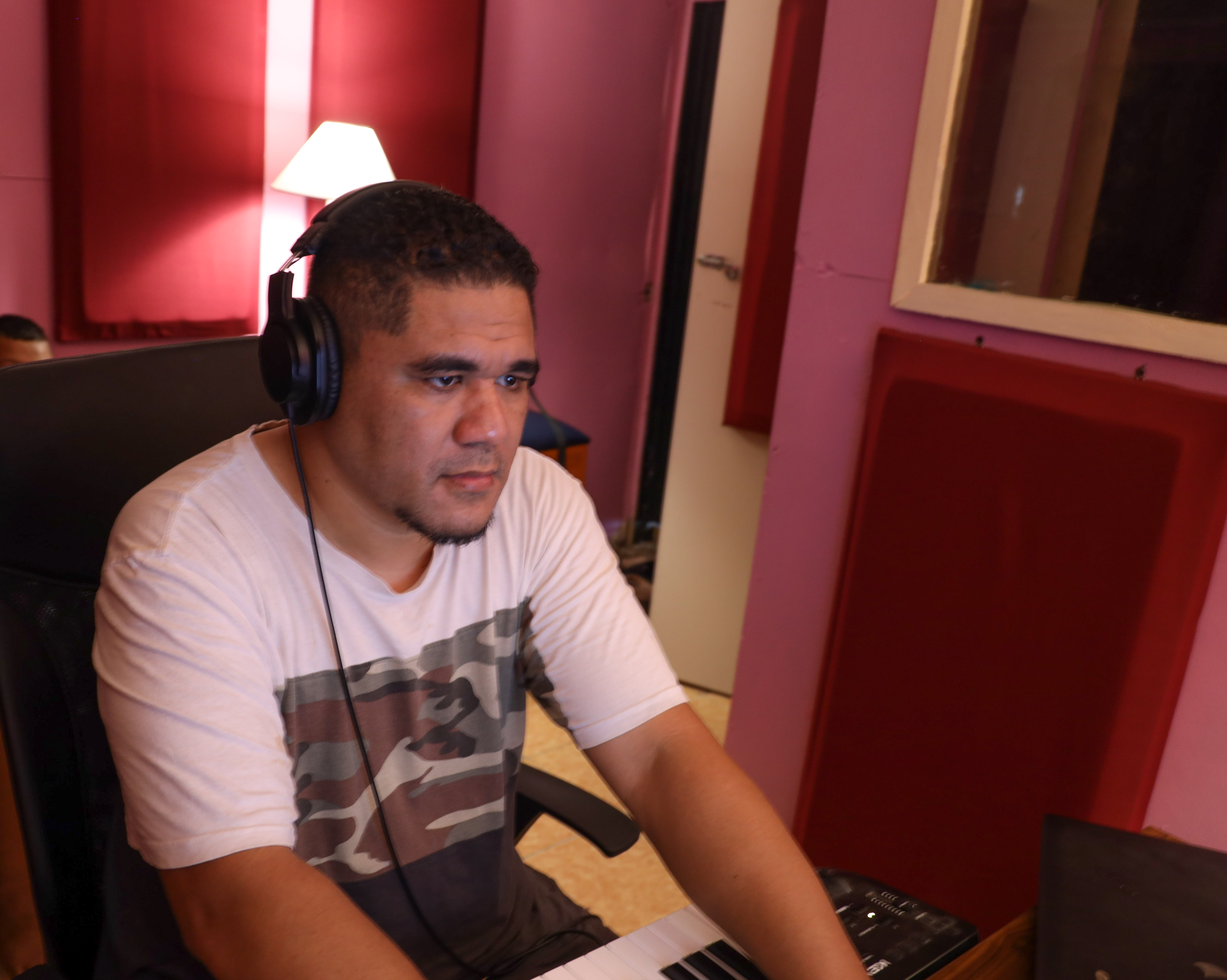 Uili showed this newspaper his sound recording studio and system and displayed a few of the Christmas music videos they’ve recorded this year.

There was a sneak peek (before they were released this week on YouTube) of a beautiful version of the spiritual hymn “Silent Night” by Yonita Tuia Tauiliili with backup vocals courtesy of Mareko Amitai and Mataipusi Amitai.

The video starts with Tauiliili, who lives in Toamua, sharing her testimony about Jesus Christ.

The video was captured by Choo Koon and the music was arranged by Uili. The video showed images of Tauiliili’s home, her Christmas tree and her family husband and children, as well as her church and The Church of Jesus Christ of Latter-day Saints Temple in Pesega.

Tauiliili and her family are members of The Church of Jesus Christ, like Uili and his family.

There is also a Christmas-jazz medley Pesega Boy fans can look forward to, which kicks off with “Jingle Bells” and some holiday reggae tracks.

But Uili points to an original song about the coronavirus called “Many Questions,” which was written and sung by Seiuli, a radio DJ at Talofa FM.

“It’s reggae. I think this is one of the best reggae tracks I have produced, it’s this coronavirus song,” he said.

The former Pesega College music teacher and pianist declare that he loves his job and is living his dream.

The studio has been doing well since he left Pesega College in 2018 after working for 12 years as a music teacher.

He thought producing music would be just as easy as playing or making music on the piano, but he discovered there was much more to it.

So Uili enrolled in music courses in Laie, Hawai’i in 2019. He has a brother who lives in Laie.

“I went and did some training in Hawai’i. I took music courses for three weeks in La’ie from a man who retired from teaching at Brigham Young University,” he said.

He explained that two types of people approach him at the studio: songwriters in search of someone to sing their words and people who write and sing themselves.

“Two types of people come here. There are people who have the talent for music writing and they ask me to recommend someone to sing their song,” Uili said.

One client, a young high school graduate, came to Uili to record a song. The artist is good at writing but he needed vocalists to make his song “Faauma Ta’ua” a reality.

“I recommended a girl to lead and a boy to rap so that song became really popular on TikTok,” Pesega Boy said.

“The other kind of person is good at both – writing and music. My advice is to write your own music. For example if you write about a teuila, your write down teuila because that song is about the teuila…you brainstorm and write down all the thoughts that come to mind when you think of the teuila then you make up a tune.”

For those who need extra help, Uili suggests you visit his studio.

“The people who come and record their music here, 80 percent are covers. You hardly hear any originals.”

Only about 10 percent of the artists he works with create original music, he noted.

Others take a popular English song and tweak the song with Samoan lyrics.

“Come up with your own melody…when I upload a song that uses the melody from [an established song] a copyright warning appears [on YouTube so if you make your own original music, you don’t have to worry about copyright issues,” added Uili. 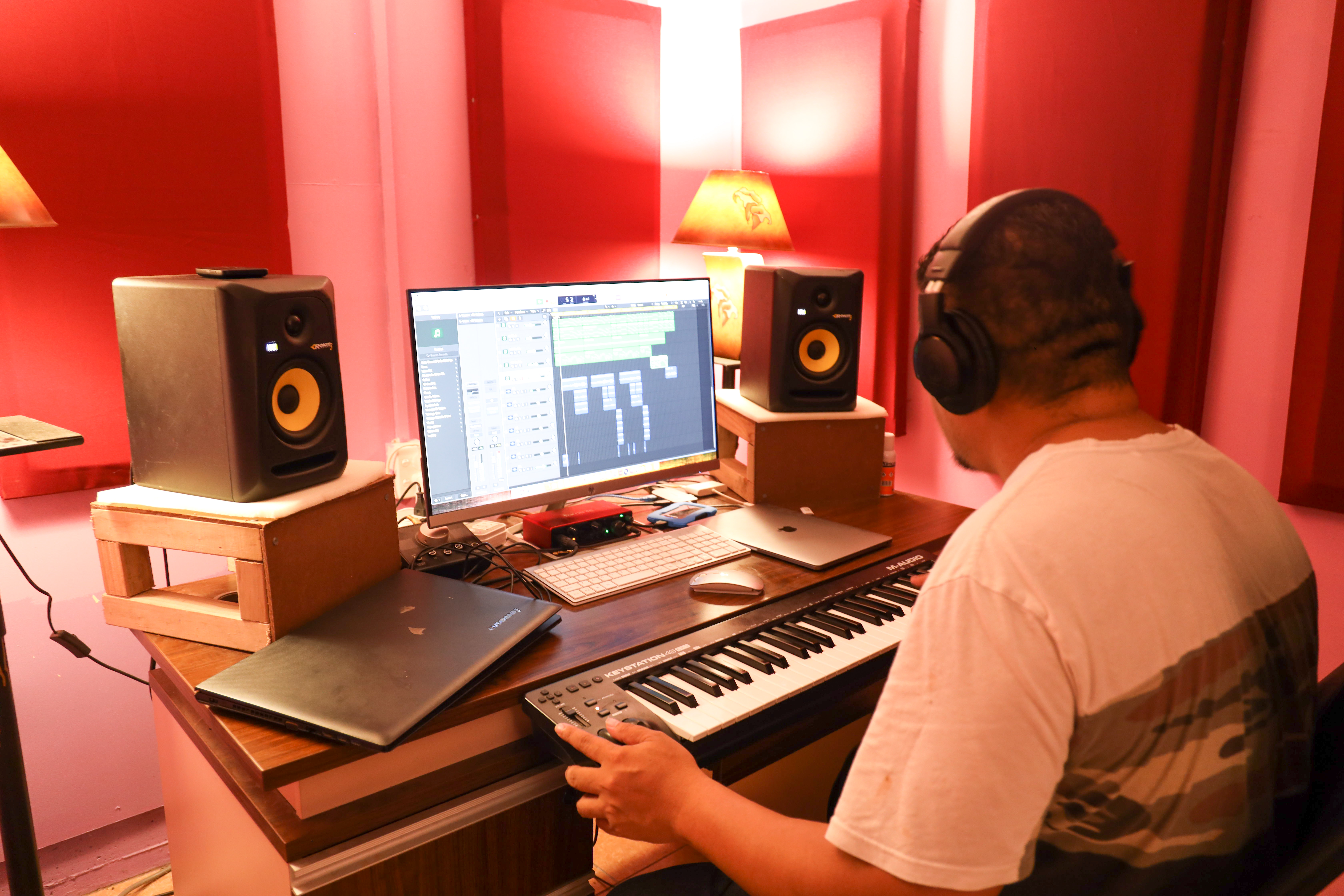 “It’s just spiritual music. The reason I did this is because so many people have been requesting church songs,” Uili said.

Songs from the Pesega Youth Choir (“Choose The Right”), Tauiliili (“Silent Night in Samoan”) and the Taumate and Carolyn duo (“Aua E te Maliu Ese”) have been published on his new channel. The hymns, and some of the chords, have been arranged by Pesega Boy.

This Christmas season, he is doing some contract work, recordings for his church, playing a small role in the worldwide Light The World Christmas campaign.

“You know there is a different type of spirit that is created by Christmas music. My wish is that we may all feel the Christmas spirit through the music,” Pesega Boy said.