The unnamed suspects arrested by the Police following the raid in Satapuala and Faleatiu. (Photo: Aufa'i Areta Areta)

Three men were arrested and Police seized 4000 marijuana plants after they executed an armed raid on drug plantations deep in the mountains of Satapuaala and Faleatiu on Tuesday.

Led by Police Commissioner Fuiavaili’ili Egon Keil the drugs were confiscated after Police had spent the morning scouring four marijuana farms from early on Tuesday morning. 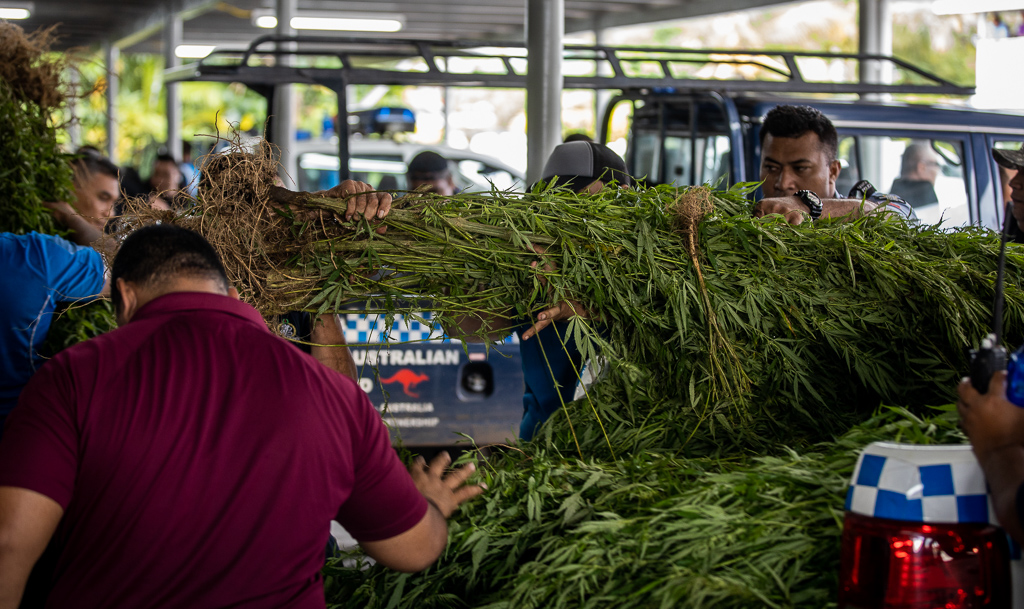 Around 2pm, Police arrived at its headquarters with seven cars loaded with marijuana plants that were up to six feet tall.

“Early this morning, we executed a search warrant following numerous complaints of narcotics being sold in the area,” the Police Commissioner said.

“It’s believed that methamphetamine is being exchanged [for] cannabis.” 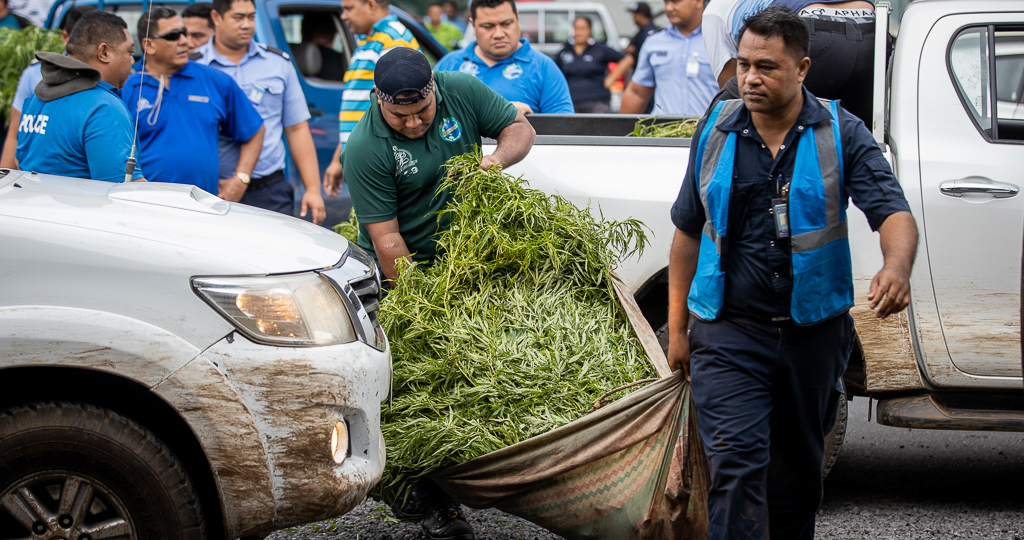 He said the Police involved 14 cars and about 60 frontline officers in the operation.

“Naturally in that area there were shootings in the past, therefore the Police were armed as well and the thing is, we’re not there to use these firearms, we had those [guns] for our protection, but not a single shot was fired,” the Commissioner said. 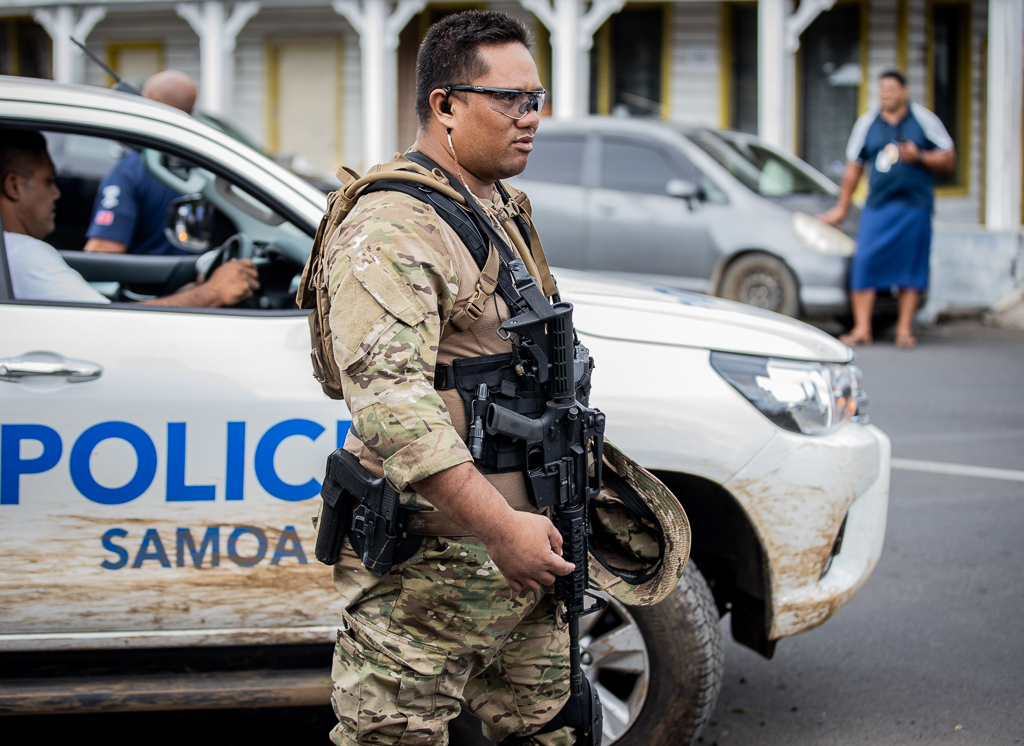 “The Police had the opportunity to use our drones for their operation and during the raid, they had footage of people living in shacks on the mountains, but they could not be located during the raid.

“Police went all the way to the top [of the mountain] using the new road in Faleatiu and Satapuala. 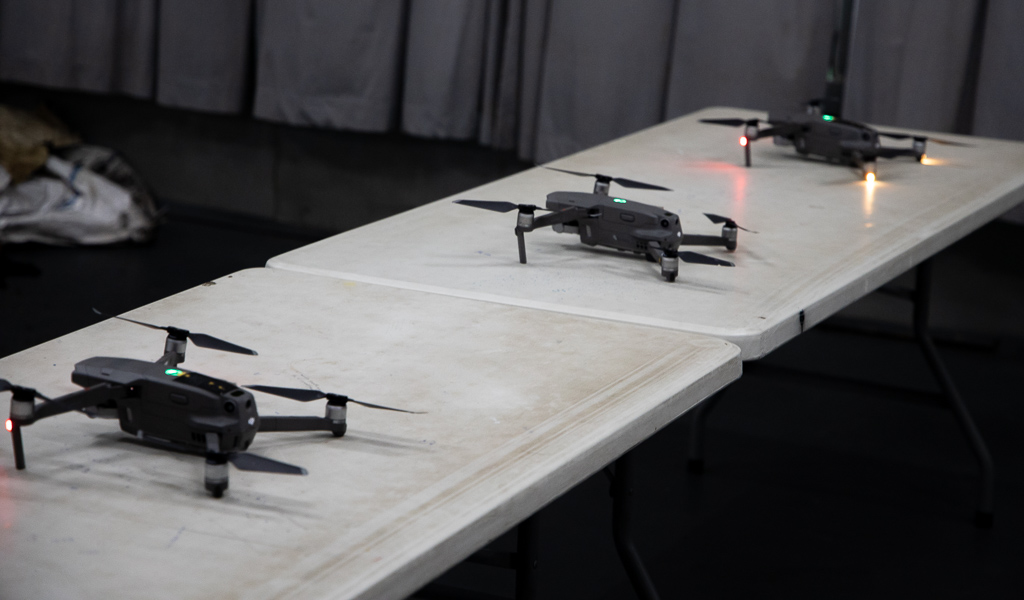 “We had to use our [four wheel drive] to get to where we [needed] to go, but it is not as much as we collected last year [in] November where we got over 10,000 plants and [this is] 4,000 plants and this goes to show that these thugs have kept their activities up there and maybe they moved somewhere else.”

The Commissioner said they wanted to clear the marijuana farms before the “Christmas sales”.

“It was a very successful operation,” said the Commissioner.

The names of the arrested men were not released.

He was thankful there were no injuries.

“And hopefully it sends a message to anyone who is selling or growing marijuana in any area, we will come and we will shut it down,” he said.

“I would like to say thanks to the Alii ma Faipule (village council) of Satapuala and Faleatiu for allowing us to go up there and helping us throughout the year on this [drug] issue.”

He said there were no weapons confiscated by the police.

The Commissioner noted that at the marijuana farms, they saw first hand how “poorly” the drug accused were living.

“They had makeshift houses [made out of] tarpaulin and tree branches. They [were] also eating tinned fish; noodles and they drank from the rain. It was very poor conditions and unhealthy,” he said.

“[However], we are very grateful for this successful operation and also [to apply] our training on drones and also our system and tactics that we have learned this month.”

In November last year in what was billed as the largest drug bust in Samoan history, dozens of undercover Police netted about 10,000 marijuana plants, firearms, methamphetamine, ammunition and cash.

The operation led to an armed standoff but ended without any weapons being fired and six suspects being arrested. That raid involved about 100 plainclothes and uniformed Police Officers.