How can you test positive and negative for COVID-19? One reason is if you were infected in the past. (Photo: USAID)
Health

For the past two weeks Samoa has been fascinated by a case of a man with both positive and negative test results for the coronavirus.

Now, a second man from the same flight has done the same, repeatedly testing negative until last Friday when he showed a positive result.

Microbiologist Dr. Siouxsie Wiles explains that the COVID-19 test can find all leftover parts of the virus in the human body, even "inactive" scraps which are no longer infectious, left over from an infection a patient has recovered from.

“People will test positive when they have high amounts of virus in their body but that when their immune system clears the virus you end up for several weeks afterwards with bits of the viral genetic material hanging around and that is picked up in the test,” she said.

World Health Organisation country representative Dr. Rasul Baghirov says depending on a person’s condition, those virus scraps may or may not show up in the P.C.R. test.

Inflammation (caused by a cough or cold) can often bring forward virus particles that were not previously picked up, which is why these historical cases don’t always test positive every time they are tested after recovery.

There are a few ways to know if someone’s positive test is evidence of an old infection rather than proof of a new one.

First, the testing machines will take a long time to deliver a result. That is because there is so little genetic material of the virus there, it takes the testing a while to find it.

Someone in the infectious stages of the virus, immediately before or while they have symptoms, will have loads of the virus in their body and the testing machine will produce a result immediately.

Second, an antibody test, also called a serology test, searches for the proteins in the blood that work to fight infection – antibodies.

If your blood shows antibodies for the disease it means you have had an infection, fought it off and won.

“These antibodies attack the virus and basically destroy it and stop it reproducing,” Dr. Baghirov explains.

Antibody tests are especially useful because they can tell if you have been infected with COVID-19 in the past and didn’t know it at the time.

Dr. Baghirov said with most COVID-19 cases only getting a mild infection, it is entirely possible to have stayed home sick with symptoms of a cold and never gotten tested for COVID-19.

It is why countries around the world are urging people who suspect they have COVID-19 symptoms to get a test, in case they are contagious and pass on the virus to others.

So, how does a coronavirus infection work?

COVID-19, the novel coronavirus that causes the disease SARS-CoV-2, infects a person through exposure by aerosols – liquid droplets carried in the air from person to person, or person to surface.

You can inhale these droplets in your nose or mouth, or carry them there on your hands.

Between first exposure to the virus and your body showing symptoms, the virus goes through an incubation period, essentially developing and growing in the body.

This is usually four or five days but can take up to 14 days. In extremely rare cases, people have incubated the virus for longer. This is why people are now being asked to quarantine for 14 days when they travel.

At the point at which symptoms appear, there is a lot of the virus’ genetic material attacking the body at once. This is called the viral load.

Are you infectious after you have been sick?

In the days after your symptoms first show up, the viral load begins to decline and the virus stops being able to replicate, or grow more in the body and cause more illness.

After 10 to 15 days, that viral load is almost nothing. People actually stop showing evidence of active COVID-19 virus in their bodies.

A study found that if you were exposed to a person with the virus six or more days after they first showed symptoms, you would not get infected yourself.

The virus however can remain in the upper-respiratory system – your nose, mouth and throat area – for 12 weeks, and some “persistently positive” cases show this can last for even longer than that.

In a massive study, Korea’s disease control agency found no one who tested positive after recovering from a previous infection had COVID-19 virus cells that were contagious.

They studied 285 people who tested positive again after having previously beaten the virus and 790 of their close contacts.

Of those contacts, no one became infected based on exposure to those 285 people.

Korea’s findings show that there is no evidence that people who test positive for COVID-19 despite having seen off the infection - or "historical cases" - are infectious to others. 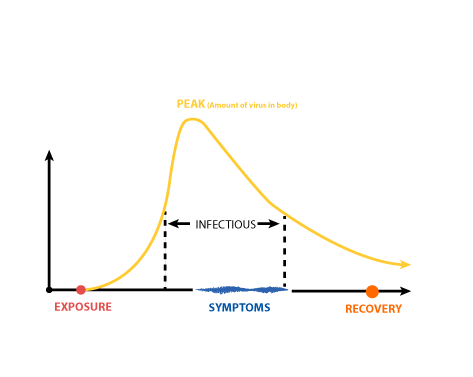 How do you identify a historical case?

In managed quarantine, Governments like Samoa’s test people for COVID-19 routinely towards the beginning and end of their managed stay, regardless of whether they show symptoms.

New Zealand’s Ministry of Health explained how they determine if a weak-positive test – a test result that takes a while to be produced – they find is historic or not.

“A weak P.C.R. result can mean that either someone is at the beginning of an acute infection or are an historic case,” a spokesperson explained.

“In New Zealand our protocol is to repeat the P.C.R. test for anyone who has a weak positive P.C.R. test as soon as practicable.

“If the repeat P.C.R. result remains a weak positive or is negative then it suggests that the person is an historic case.”

Then it’s time to look at the case history of the person being tested. Have they been previously diagnosed with COVID-19? Or, did they have symptoms of the disease – fever, dry cough, tiredness, and more – and weren’t tested? Have they been to a country with many cases of the virus?

“If serology (blood) tests also show the presence of antibodies it can provide further confirmation that it is a historical infection,” the spokesperson said.

The Ministry of Health often reports finding historical cases in its routine managed quarantine testing, though it was unable to produce a figure of how many it has found this year.

Can you get infected a second time?

So far, there is very little evidence of people becoming re-infected with COVID-19 a second time, but scientists say it is too early to say.

As the pandemic continues, experts expect to see more cases of re-infection which should help explain how or why it happens, when it can happen and how severe a second infection might be.

Though rare, some people are reporting second infections with COVID-19. This suggests the body does not develop long-term immunity to the disease, the way it does with things like measles and chicken pox.