A second person in Samoa has tested positive for the coronavirus, prompting the National Emergency Operation Centre (N.E.O.C.) to activate the country's COVID-19 alert system.

The second patient in Samoa to return a positive test was a 70-year-old man, the Director-General of the Ministry of Health, Leausa Dr. Take Naseri told reporters on Friday morning.

The father who tested positive was on the same repatriation flight from Auckland as the country's first suspected case of the coronavirus - a returning sailor who has subsequently tested both positive and negative for COVID-19. (Final results on the first patient are being sent to New Zealand for blood analysis after earlier nasal swabs returned conflicting results.)

The first patient recorded his first positive test on 18 November.

A total of 274 passengers landed in Samoa on the Friday 13 November on an Auckland-Apia repatriation flight.

An additional seven days will be added to the 14-day quarantine requirement for all 274 passengers who arrived on the Apia-Auckland flight.

Leausa said the elderly man - and his wife, who tested negative - would be isolated at the Motootua hospital. He said the 70-year-old father who came to Apia via Melbourne, Australia first tested negative for the virus upon arrival.

"He has shown no symptoms," the Director-General said on Friday morning.

However, a follow-up test for the man including all 274 passengers on Wednesday confirmed he has now tested positive.

"He has not shown any symptoms [for COVID-19] such as coughing, fever, pneumonia or flu," he said.

“His appearance is of someone that long endured high blood pressure and taken pills…he has been transferred in the control isolation [area] at the hospital with his wife.”

According to Leausa the elderly father suffers from high blood pressure and infected kidneys. He added that further testing samples will be taken to New Zealand to reconfirm the results for the 70-year-old and blood sample for the sailor.

“These cases are not easy, the elderly man has other illnesses weakening his immune system,” he said.

“There is no antivirus – we only treat the complications. “There are a lot of complications [with covid] like infected throat, chest infection causing pneumonia and antibiotics are prescribed for it…”

The Director General said it was fortunate that the two suspected cases were diagnosed within the quarantined sites during screening and testing. He stressed that the health staff are enforcing all preventative measures to ensure that there is no community transmission.

Of the change in the nation's alert level, Agafili said Level 1 reflected a situation when the virus continues to present a low risk to the public; it is activated when there are 1 to 6 cases.

He said Level 1, which was enacted on Friday, includes measures such as advising members of the public to observe social distancing and to observe all relevant hygienic measures.

“It is advised that people wear their face masks when visiting public places especially when using public transport and even in your own [private] vehicle,” said Agafili.

Members of the community including those in the villages are instructed to enforce social distance between people.

Those traveling to the town area for shopping are advised to wear face masks. 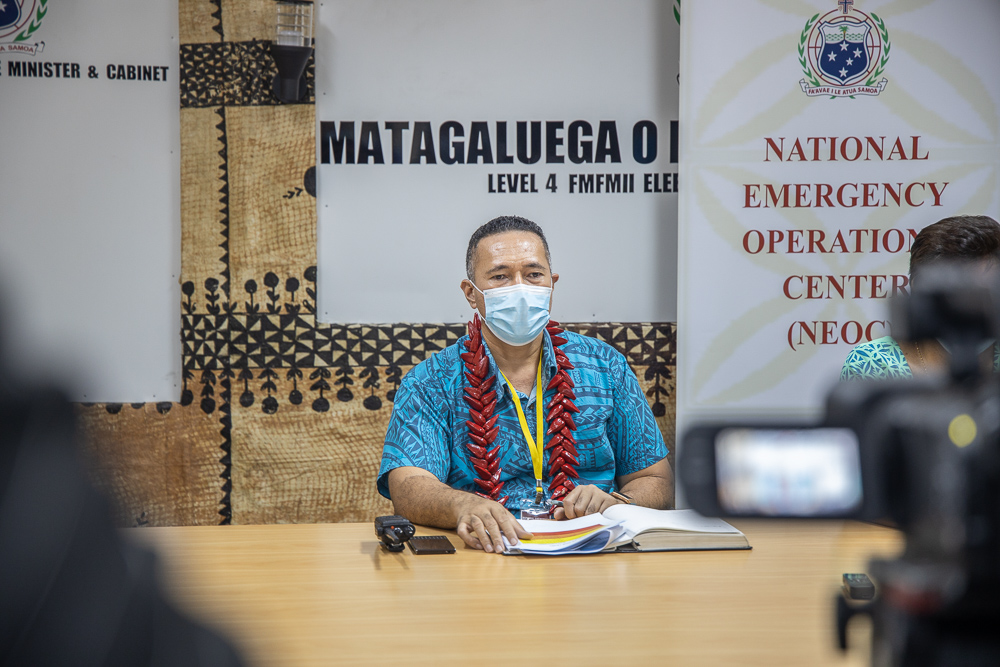 Agafili acknowledged the support of businesses who are part of the N.E.O.C. Committee for implementing the measures and providing hand sanitisers for the public entering the stalls.

He urged the businesses and shops to strengthen their actions in enforcing the preventative measures.

Level 2, which is represented by an orange alert on the COVID-19 risk level plan, is when the nation is presented with a moderate risk from the virus, the interim Chairman said.

Level 2 is invoked if there are 7 to 9 reported cases of COVID-19 and, Agafili said.

“This level means that the country must take extra protection and preventative measures limiting movements,” he added.

“The public is also warned [when] attending public gatherings [to act] with strict control.

“We are not in Level 2 but the committee will advise on when the gear should change to orange.”

Lastly, Agafili said Level 3 on the alert scale, which is represented by the colour red represents a high risk to the community and the possibility of the transmission of the disease outside quarantine sites.

“When it's red it’s a total shut down and everything closes down,” he said.

“Stay home and stay safe…everything will close from the airport to ferries and for everyone to remain at home.”

The interim Chairman said the national response plan was jointly prepared by the Minister of Health, Faimalotoa Kika Stowers, Director General of Health, Leausa, and the N.E.O.C. Committee.

He also noted the Ministry of Women Community and Social Development plays a role in the national COVID-19 response plan by relaying messages and increasing levels of public awareness among people who live in villages.

After the first person in Samoa to return a positive test subsequently returned conflicting positive and negative results, apparently with the contradictory diagnoses coming from different nostrils after swab tests were sent to New Zealand for analysis. Local tests showed similarly conflicting results.

Speaking to the media on Tuesday, Prime Minister Tuilaepa Dr. Sailele Malielegaoi said blood samples from the patient would now have to be sent to New Zealand for further analysis.

The Government expects to receive the results of the blood tests on Monday, the Prime Minister said.

The man and his roommate at his quarantine facility remains in lockdown at the national hospital.