The day is marked on September 29 with Fuiavailili describing it as a special day to recognise the hard work, dedication and the efforts of law enforcement officers including the police.

“It’s an honour to be a police officer to serve the country of Samoa or anywhere in the world. 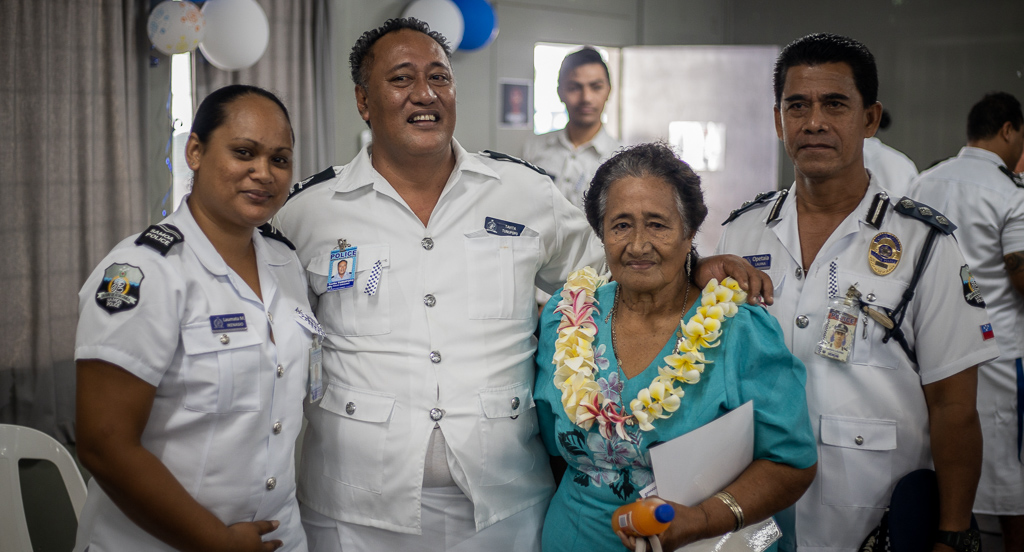 It’s a unique position, a very visible profession and it’s one of those things where you have to make decisions right away.

“And sometimes, your decision, somebody can die and somebody might live and there’s a lot of law and protocols that we have to navigate everyday to ensure that we’re doing our jobs correctly and that we don’t violate the law ourselves.”

Special mention was made of police officers who have passed on.

The son of the late Superintendent Stowers, Richard Stowers, continues his father’s legacy in the Police and has been an officer for close to seven years.

His mother and a wife to the late superintendent, Fuata’i Stowers, was invited to the celebration together with the families of other officers who have passed on.

“It’s a very special day for my son to be reminded of why his job matters to him and the people of Samoa as well as his family,” Mrs Stowers said.

“I was just thinking of how long my husband’s service was to this industry and his passion to serve the people of Samoa with the best of his abilities.”

Her husband passed on in June this year while undergoing medical treatment. 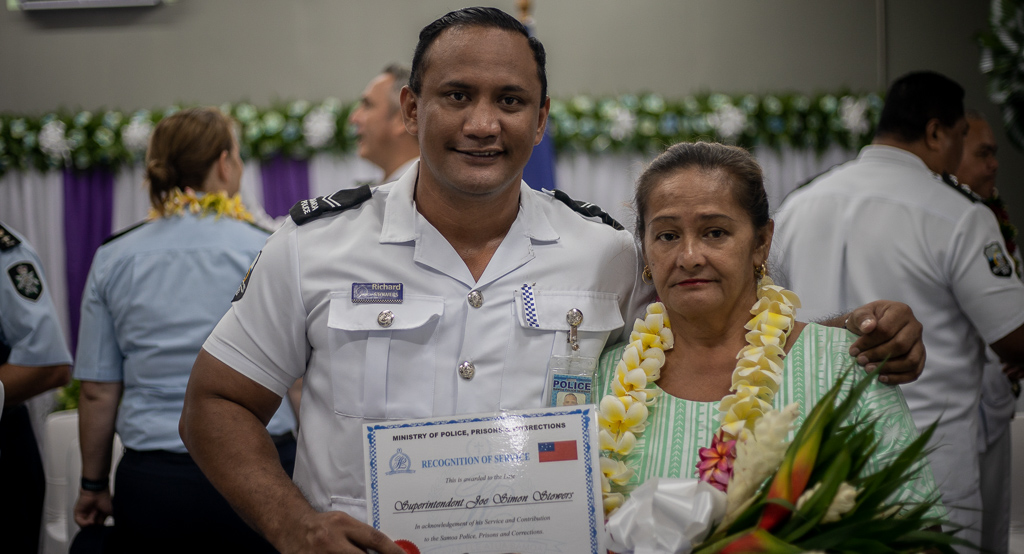 Fuiavaili'ili said together with officers from the Prison and Traffic Divisions, the number of employees under the Police Ministry total 887 and include both sworn and non-sworn officers.

Speaking about his men and women’s loyalty and commitment to the community, the Commissioner said they feel a sense of responsibility to the community and love their job.

“We do it because we love it. We love the fact that it gives us this nice feeling inside. At the end of the day, we feel like we did something good for the community and the society to keep our country a little bit safer.

“So it’s a day of no regrets or sad day but it’s like thanksgiving day in the United States where you give thanks to everything that we have.

“Our partners, the law enforcement, each other, families, Government, community, everything and the law too for protecting us and letting us do this job.

“And it’s a day that we remember all the hard things that we had last year and the people we lost.”

The Samoa Police Service is yet to see any of its officers die in the line of duty, though Fuiavaili'ili said they don’t take their job for granted as anything can happen at any time.

“We’ve lost others in off duty from natural deaths so we’re very grateful but also we’re always cognizant that it might not be so we always try to and as the Commissioner, I always try to teach them to uplift the organisation.

“Elevate it and don’t rest on our laurels, the stuff that we’ve accomplished already last year, I want to keep pushing to sharpen our skills, motivate the staff, bring better equipment, better technology, awareness, more techniques, make them look sharper because if they look good then they feel good and there’s pride.

“Up the morale so there’s a lot of things that the Police Commissioner can do to make the organisation and to drive it forward to places where they’ve never reached before and I’m so grateful to that opportunity the Samoan Government has given me.”

According to data on police officers who have died in the line of duty, the U.S. has recorded 373 last year, Australia 4, New Zealand 1, Fiji 1, United Kingdom 1, Malaysia 31, Singapore 15 and Papua New Guinea 3.

Fuiavaili'ili said one of his goals while serving his second term in office is for police officers to reach the best of their abilities, propel the organisation forward, and ensure Samoa continues to be a safe country with greener pastures.

He added that one of the accomplishments the Police recorded this year is reaching the highest peak in Samoa, which is Mt Silisili in Savai’i.

“So if we can reach the highest peak in Samoa, we can go anywhere in Samoa in doing our job,” he said.

“So if there’s any faalavelave anywhere, any mountain raids, any valleys and we put ourselves out there in these raids that we do too, to the most dangerous places, we’ve been there, that we’ve accomplished those things so it’s a lot of pride and gives them the confidence to do their job a little bit better.”