Samoa’s rise in the press freedom rankings by one place to 21 out of 179 is good news for the small island nation, but it should not rest on its laurels according to freelance reporter Autagavaia Tipi Autagavaia. (Photo: Vaitogi Asuisui Matafeo)

Samoa’s rise in international press freedom rankings by one place to 21st in the world is good news, but not reason to rest on its laurels according to veteran reporter Autagavaia Tipi Autagavaia.

Autagavaia, who has been reporting in Samoa for nearly 30 years, said the new ranking for Samoa is positive but that the country has room for improvement.

He said amongst all the work he does across the country, it is only when dealing with certain areas of Government that he comes up against barriers to his reporting.

“The Government needs to stay transparent and remember the media is the fourth estate and recognise our service to the public,” Autagavaia said.

“Overall the way we work, we have no problems at all. It’s just getting the chance to talk to Government and ask questions of the leaders of the day in a transparent way.

“To me that should not stop us from doing our work the way we do. And I know there are people in Government who are really in support of us.”

Last year, Samoa’s National University closed its journalism programmes in favour of rebooting both the diploma and Bachelor’s courses. Asked whether that would be good or bad for the industry, Autagavaia said the programme has long needed improvements.

Closing the programmes is an opportunity to revitalise the media school, which, for at least five years, was not fulfilling its purpose wholly, he argued.

“I am not concerned, I am quite happy about the decision to close it down. We need to put in a new system and attract people to the study of becoming a journalist,” Autagavaia said.

Australia’s fall behind Samoa to place number 26 is a concerning development for the country according to Professor Mark Kenny from the Australian National University’s  Australian Studies Institute.

The former veteran political journalist in Australia, who was most recently the national affairs editor for both The Age and the Sydney Morning Herald, said a culture of secrecy explained the nation’s fall in the rankings.

Unlike other countries, he said, Australian officials believe they have the right to withhold information more so than the public have a right to know what a given journalist is seeking from them.

“Australia’s press freedom rating is low because of a culture of secrecy which pervades governments, various authorities, and the defence forces,” Professor Kenny told the Samoa Observer.

“While some protections exist such as Freedom of Information rules, in truth governments and their officials have found myriad ways of circumnavigating them.

“Between inordinate delays, extensive redaction of documents, and use of security and Cabinet-in-confidence exemptions, much information is concealed.”

In its review of Australia, the R.S.F. detailed the many failings of the Australian Government against its journalism industry in the last year.

They described federal police raids on the home of a political reporter and on the headquarters of the Australian Broadcasting Corporation as “flagrant violations of the confidentiality of journalists’ sources and public interest journalism.”

The country’s defamation law, called “the harshest of its kind in a liberal democracy,” the Prime Minister’s own climate scepticism and obstruction of climate issue coverage, and the ownership of private media reduced to just two “giants” all contributed to the low ranking, R.S.F. stated.

Finally this year, the Australian Associated Press (A.A.P.) folded after 85 years in operation after being “deemed insufficiently profitable.”

Professor Kenny said the damage to the industry, and the “culture of secrecy” was unlikely to change soon without a visionary, progressive leader determined to legislate anti-corruption rules and insist on greater Government transparency.

“As a model ‘developed’ nation, Australia should do better on transparency and should lead by example,” he said.

“Its slide down these rankings should be an embarrassment to any government calling itself ‘liberal’.

“The raids on journalists’ homes and workplaces sent a terrible signal. One hopes the correction in policy will come soon.”

The 51st Pacific Island Forum (P.I.F.) leaders meeting scheduled for August has been postponed due to COVID-19 and Cyclone Harold, according to the Government of Vanuatu. 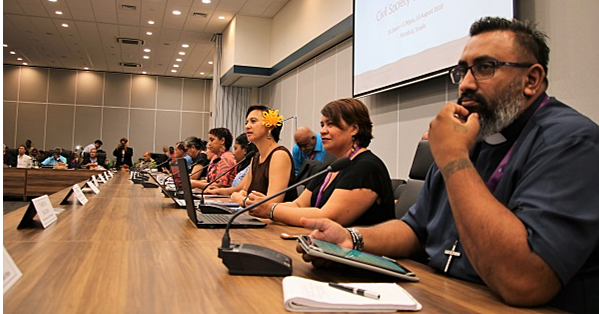 Forty civil society organisations are gathered online this week for the sixth Pacific Island Forum meeting for community groups on the region’s priorities.